In addition to the amusement park, there are still more reasons to climb back to the Magic Mountain. For example, enjoy the viewpoint that the owner company closed in 1985 to install an attraction. The City Council has removed the fence that prevented free access to this unique citizen balcony, which offers a privileged view of Barcelona.
The origin of the Tibidabo amusement park dates back to 1899, when Salvador Andreu, the creator of the famous «Dr. Andreu’s pills«, Founded the Tibidabo Public Limited Company. One of the company’s projects was the creation of a leisure center on that peak, as part of an operation to bring the mountain closer to the public. 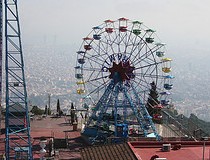 The Blue Tram, the Funicular and the attractions were inaugurated on October 29, 1901, and shortly after the first attractions arrived at Tibidabo. The park retains some of the most significant, which have filled the park during its hundred years of existence, such as the Castle of Terror and the roller coaster, or one of its most unique pieces, the plane, dating from 1928 and that It is a replica of the model that made the first trip between Barcelona and Madrid. 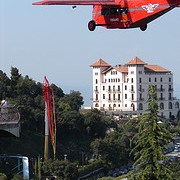 The attractions of Tibidabo are the works that were carried out between 1901 and 1905. The Marquis of Alella, built the Fabra Observatory, an astronomical observatory by Josep Domènech i Estapà, near this one, in 1905, Ferran Alsina built the experimental physics museum The Mentor, which shows some of the scientific devices of that time and has been preserved until now. Among the changes of the time, the conversion of the mountain slopes into a municipal park in 1908 also stands out. 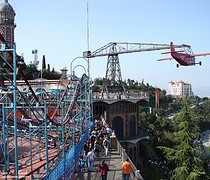