The month of July is undoubtedly an important month in the city of Navarra Spain, since the biggest bullfighting festival is celebrated in honor of the patron saint of the city San Fermin, being this party the best known worldwide and a banner of Spanish culture and tradition, on July 7 marks the beginning of the party and the meeting point to start is in the street of Santo Domingo, A group of young people gather and begin to give their songs to the image of San Fermín, which is located in a vault on the wall. The song recites the following lines: “To San Fermín we ask, for being our patron, guide us in him”. 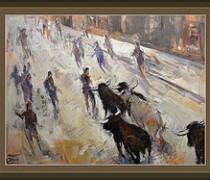 Painting of the San Fermines

After asking San Fermín, a shot is heard, an act in which a group of huge bulls are released that begin to travel the streets. The shot is to make sure everyone knows that the bulls have been released in the streets. The bulls must run a half mile until they reach the ring. The crowd runs in front of the bulls hoping they can feel their breath and the adrenaline that this generates, always avoiding being hit by the enraged animals.

It is said that the tradition began in 1,591, when residents of San Fermin they had to dump their cattle to the arena, as time went by the tradition changed, but with the difference that instead of running behind the bulls, they ran ahead of them. 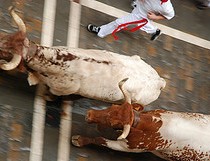 Image of the San Fermines

If what you want on your trip is to experience a dose of adrenaline, the Fiesta de San Fermín is one of the first destinations to consider when traveling in Spain.