The Regional Urban Transportation (TUC) is the service from buses which operates in Pamplona and its metropolitan area. It is quite effective although at certain times it is saturated because it is the only way to urban public transport from the city. Annually transports more than 38 million passengers. 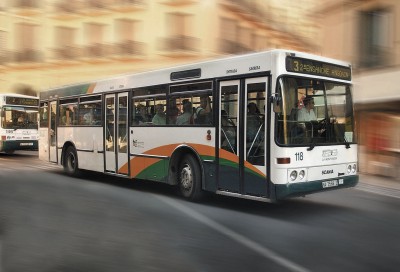 The service has 88 buses active and up to 102 at peak times. It has 418 stops along 23 lines daytime and 10 nighttime. The buses are white, yellow and green, which are the colors of the Commonwealth of the Region of Pamplona, ​​the local entity that owns the service.

The price of the ticket Simple is 1.10 euros. Payment in cash is restricted to tickets with a value lower than those of 20. Another option is the Purse Card (2 euros), which is rechargeable and reduces the price of the ticket to 0.56 euros. They can be acquired in different establishments of the region or in the same offices of the commonwealth.

The schedule varies between lines, but the average is from 06:30 until 22:30. On Saturdays and holidays there are no major changes, except in the line 22 and 24 when there is no service. They have a very acceptable frequency that goes from about ten to fifteen minutes to half an hour on their longest journey. 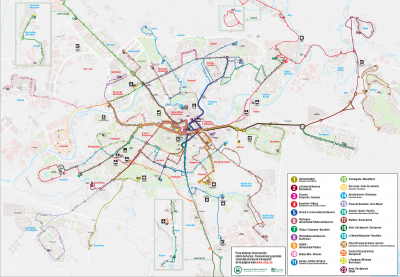 The night lines They work from 23:00 until 00:00 on weekdays, until 04:30 on Fridays and until 06:30 on Saturdays and Sundays. Its frequency is very variable, ranging from 15 minutes to 60. For specific information on each line Check the website of the company: