A few days ago I contacted Jose Vaquerizo, VaKe for friends, to ask you a favor. I wanted him to share his adventure in the Santiago’s road with us. That said it may seem like one more story without any extra incentive, but in this case it is a personal improvement even greater than the usual ones. Vake is a physically disabled and Paralympic athlete from Boccia. He and Nieves (assistant coach in this sport and friend) undertook this road 170km from Santiago.

This adventure arose at the 2008 Paralympic Games in Beijing, when one day Nieves and I talked about the possibility of doing the Camino de Santiago and began to think about it. A year later we made the idea come true, which in turn helped me to get rid of the frustrated experience of the road lived a decade ago. 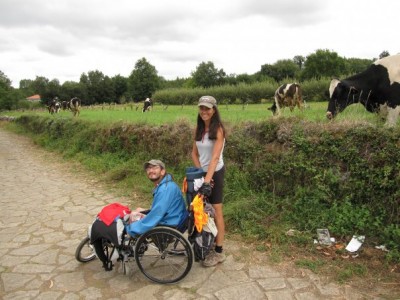 We started the adventure on Saturday, August 22, when I took the train from Albacete to Madrid, where Nieves is from. There we had a friend of Nieves who works in an Agency, when he found out about our feat he immediately found us a sponsor. It was Columbia who had the reward, since the successful dissemination allowed us to go out in all the media promoting this sports brand, apparently my sports curriculum interested society?

The next day we went by bus to Galicia to start our journey in Pedrafita, checking from the first day that the 170 km we had left were going to be hard. Alternating kilometers of road with asphalt, with the help of other pilgrims that kilometers by kilometers were joining and especially thanks to the physical fitness of Nieves we arrived in Santiago in a week, doing an average of 30 km a day. 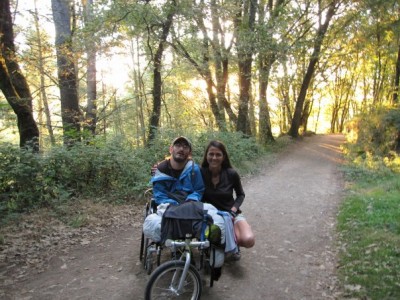 Without a doubt, the best part of the road was to know impressive human stories and the pineapple that is made during the pilgrimage with these people. This was more enjoyable the 7 hours we walked a day until we reached the goal. The shelters were the meeting point of these walking stories. 90% of these places had quite accessible bunk beds. One thing that surprised me, considering that most of the villages were very small, was precisely that, how accessible their shelters were.

The fifth stage arrived, in which is the most satisfactory section of the road for me, because it reminded me of the section I made in 2000, this time we slept a town called Ribadiso. After gathering strength after eating the famous octopus of Mélide, the same river that I crossed in 2000 came with 5 boulders, which we could cross with the help of other pilgrims and overcoming one slope after another we arrived at the paradise of Ribadiso. An old pilgrim hospital converted into a fully adapted shelter in the middle of the mountain and next to a river in which we wet our feet. 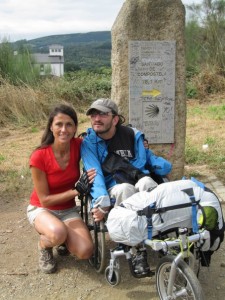 On the penultimate day we started walking at 8 in the morning and arrived at our destination at 9 at night. From the hostel you could see the two tallest towers of the Cathedral of Santiago and the truth is that that motivated.

After the 6th stage, the longest on the road, the great day came full of emotions, farewells, reunions (since I took communion I had not attended a mass) and miraculous drunkenness (what the Apostle Santiago did not do to me three more cubatas). The anecdote of the day was when I denied the consecrated ostia to the bishop and then Nieves also did it and the one next to it until the room, the one we least thought he was going to do, ate it whole more than anything for the face that put that bishop.

I know that this traveler still has other adventures pending and I would like him to witness us. For my part, I hope this story serves to demonstrate that there are no barriers or physical limitations that can prevent anyone from fulfilling their dreams. Thanks Vake for sharing your experience with us !!!!