Navarre It has very rich and varied customs. Definitely, the bull run and bullfights in San Fermín are the best known; however, there is a whole world of traditions in Navarre That should be known.

A habit very curious is that of King of the Faba, at the beginning of the year. Emotion overwhelms children when they discover that their piece of donut contains the “bean” or small gift hidden in the mass, which entitles them to be welcomed into a palace, church or castle and be proclaimed King of Navarre with the same ceremonial of the Middle Ages. This comes from an old children’s party. 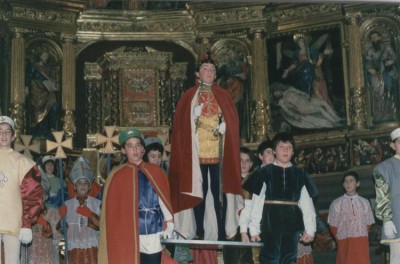 The carnivals they have a unique character, especially in the north of Navarre. People dress up in Ituren and Zubieta to accompany the “ioaldunak” or “zanpantzar” who parade from one town to another. The Lantz carnival he is the best known; here the bandit Miel Otxin is executed and burned, represented by a large straw doll. 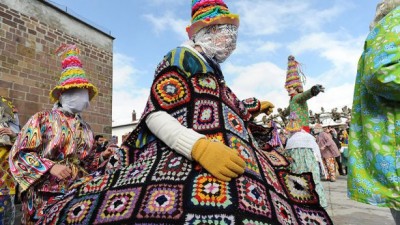 Religiosity is deeply rooted among Navarrese. Among the most famous customs is the crowd «Javierada«, A silent popular demonstration in the Javier’s Castle, the cradle of the employer of Navarre Francisco de Javier. During the Holy Friday the processions of towns and cities leave where you can “see” the air, represented on a banner. At night Holy Saturday, the cloister of the Pamplona Cathedral is the scene of the Procession of the Meeting between the risen Christ and his Mother. The next day, Easter is celebrated in Tudela with the Angel Descent, ceremony in which a child descends through the air to remove the veil of mourning that covers the face of Mary.

The parties of summer begin with San Juan’s bonfires. In the shortest and brightest night the useless junk is burned that prevents living the best time of the year with freedom, the one in which the localities of Navarre explode with the festivities, among which the universals stand out «Sanfermines«. 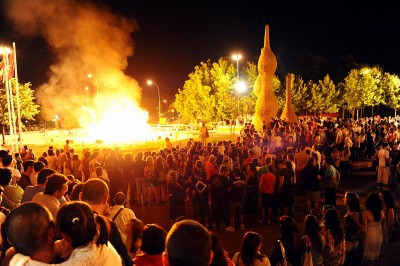 In Christmas the Olentzero, fat coal and drinker, descends from the mountain to announce the event in the Good night and bring gifts to children; This festival, which has its origin in Lesaka, has been extended to other rural and urban locations.

Finally, on the last night of the year, young people, especially in Urdiáincelebrate the water rite; they collect the new water from the fountain in vessels and offer it to the authorities and neighbors in exchange for the Christmas bonus.