Food is a symbol of honor to the main events that happen in the lives of the Chinese. The custom of seasoning dishes with a variety of sauces, vinegars, spices and jams comes from the cuisine of China. The mantra on which the elaboration of the typical dishes of China is based gathers four basic concepts: color, flavor, aroma and presentation. In what follows we show you the main dishes and desserts of Chinese cuisine.

Dim sum is a very popular dish in China that is usually taken as a snack in the middle of the morning or during the first hours of the afternoon accompanied by tea.

These small buns can be filled with fruits, vegetables, meats or seafood, and are usually served in small containers, similar to the canapés that are taken in Spain as an accompaniment.

The term dim sum comes from Cantonese and its translation comes to mean touch the heart. 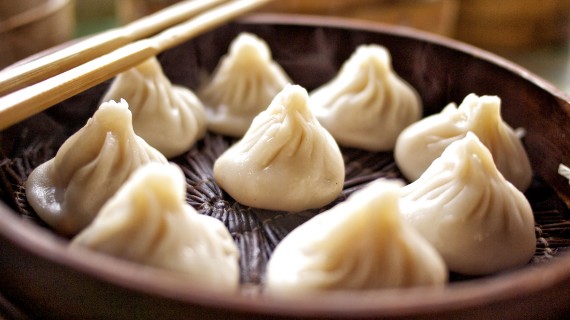 This soup is considered a delicacy in China and is usually served on special occasions, such as weddings, New Year’s celebration, etc., mainly because it is considered as a symbol of prestige and health.

This dish is made from shark fins (dorsal and pectoral), which have been removed from the skin and allowed to dry. Before preparing the soup, they should be soaked. It is usually accompanied with oyster sauce. 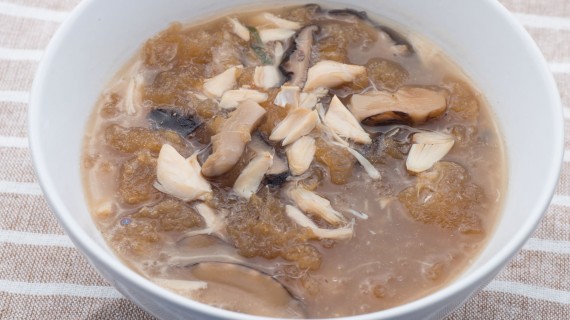 Abalon on bed of lettuce

It is a typical dish of the coastal province of Fujian, where a wide variety of cooked dishes based on fish and seafood is consumed. Among the main ingredients, we highlight: abalone, lettuce, mushrooms, ginger and onions.

All this repertoire is accompanied with a sauce made with oysters, soy, corn starch, sugar and a little broth. 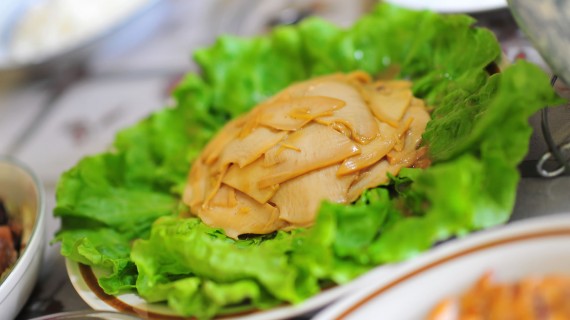 As for the preparation, lettuce is first boiled and placed as a base in the dish or source where we are going to present our dish and, then, the abalón is sauteed in a wok with oil along with the mushrooms, onions and the rest of ingredients. Finally, the sauce is added and served in the dish in which we had added the lettuce.

The literal translation of this term is roast meat, although usually found translated as crispy roast pork or Cantonese roast pork, since these are small slices of marinated roast pork.

Served with sauce hoisin, which is a very common dipping sauce in Chinese cuisine and can be found in Chinese supermarkets. 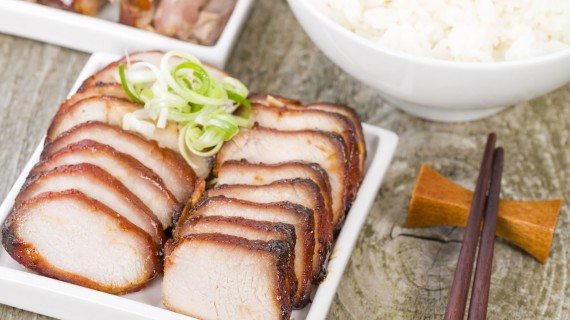 Also know as jookIt is a dish that has been cooked in China for more than two thousand years and is considered to be easily digestible.

It consists of a kind of porridge or soup in which rice is mixed with other cereals, as well as meats, vegetables and some flavorings to enhance the flavor.

It is usually taken in religious ceremonies, but also in special events or as a therapeutic treatment for cholesterol reduction, in which case asparagus is added. 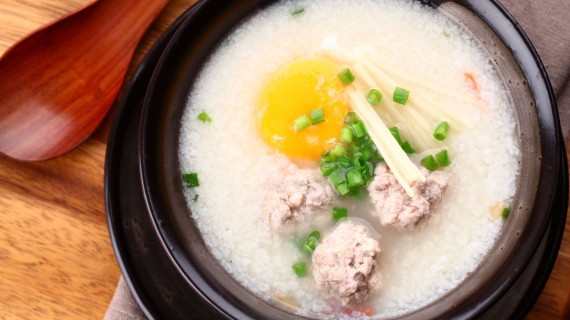 There are also other recipes considered therapeutic, such as the one that adds ginger to reduce nausea and cure indigestion.

It is a very popular dish in Asia that receives other names according to the region; So, for example, in Vietnam it is known as Chao Bo and in India with the name of Kanji.

It can also be found under the denomination You tiao. It is an elongated fried bread, similar to the usual churros in Spain, typical of Chinese cuisine and also of Southeast Asia and Asia in general.

Its flavor is slightly salty and is usually taken for breakfast, but also as an accompaniment to soy milk or rice congee.

This dish is internationally known as asian noodles (long noodles made from wheat) and is usually accompanied by chicken or beef and vegetables, although seafood or fish may also be included. It is seasoned with soy sauce. 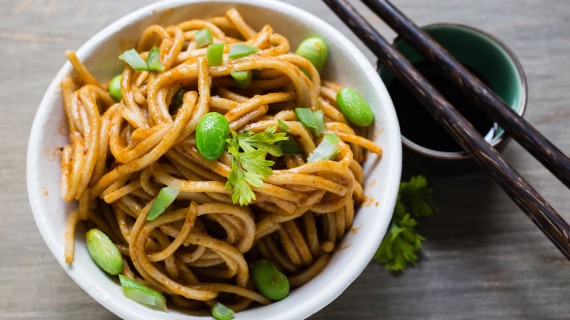 This dish is also known simply as Zong and internationally as stuffed with rice, since these are bamboo leaves stuffed with glutinous rice that are usually steamed or boiled.

They can be shaped either as a cylinder or as a tetrahedron. It is a meal that is typically served during the Dragon Boat Festival, which takes place between early and mid-June. 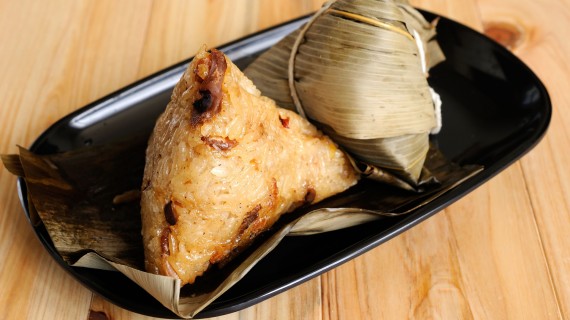 Colloquially known as I have fen, these are rice-based noodles, which have been westernized under the name of rice noodles.

They are white, can be very thin or thicker and are slightly elastic to the touch, almost as if they were rubber. They are usually used to make soups. 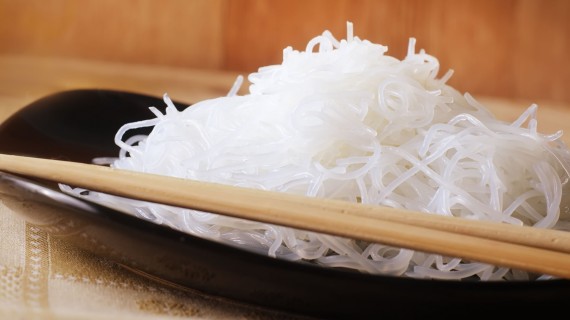 The term ban mian literally means on board noodles and it is due to the flat shape that the noodles adopt, since they are made by hand.

This dish can be served broth, which becomes a soup, or as a pasta. It is cooked in the style of the Hakka ethnic group and is usually taken mostly in Canton (China), but also in Singapore. 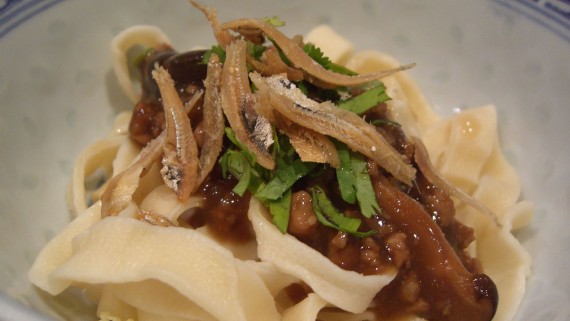 The dragon beard is a type of candy that, at first glance, seems to be fine silk threads. It is made by hand by carefully stretching and twisting the caramel and can be found stuffed with nuts or as an accompaniment to cakes or other sweets.

It is also taken in other countries such as Iran, where sesame is flavored and is known as pashmak. 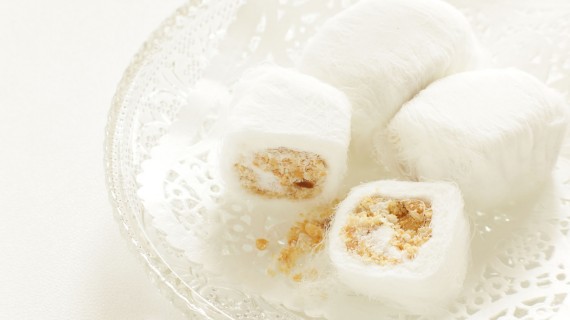 This dessert is typical of Hong Kong, some regions of southern China and Taiwan. The top of this bun is shaped like pineapple and is made with a dough made with butter, sugar, eggs and flour, similar to sugar cookies.

The lower part, on the other hand, is made with the dough with which the Chinese buns that are usually served in Western Chinese restaurants are usually made. Therefore, the top has a much sweeter taste than the rest of the bun. 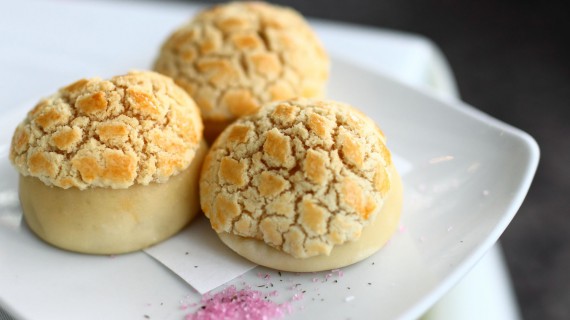 Although it is called pineapple bun, this name does not derive from the fact that the bun is made with pineapple, but is due to the shape of the top layer and the golden color (similar to that of the pineapple) that it adopts when baking it. It is usually filled with butter, although there are also pastry shops that fill it with custard.

These are cupcakes or cookies that many consider as the sweet version of dim sum. It is a traditional Chinese sweet that is taken during the Mid-Autumn Festival as moon worship.

They are usually round, although they can also be found in a rectangular shape. The filling is made from lotus seed paste, which is made with dried lotus seeds, caramelized sugar and vegetable oil, and the crust is made with salted duck egg yolks. They are taken accompanied by Chinese tea. 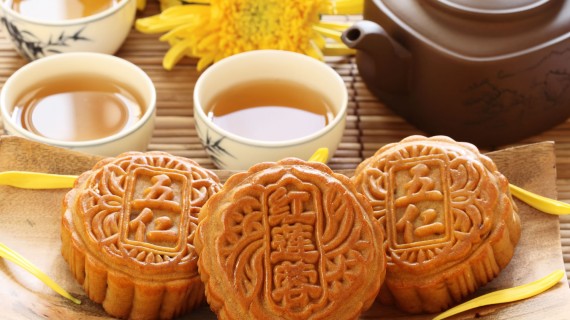 Also known as lucky cookies. Although they are popularly considered to be originating in China, it has really been the Western culture that has introduced them into the country and their impact has been such that they are currently considered a typical sweet.

They are typical of big cities like Hong Kong or Beijing. These are small crunchy cookies that have a paper inside that contains a prophecy or words of wisdom. 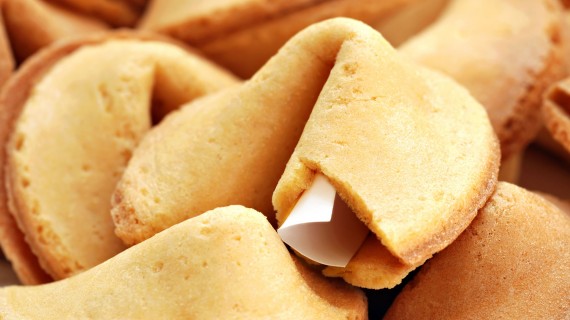 The douhua or tofu pudding It is a traditional Chinese dessert that is made from extra soft tofu preparation and varies according to the region where it is made.

In Taiwan, it is served covered with sweet ingredients, such as Chinese beans, peanuts, tapioca or oatmeal, among others, and in syrup seasoned with almonds or ginger. In northern China, on the other hand, it is usually served with soy sauce, so it has a rather salty taste.

In Malaysia and Singapore it is given the name of tow huay or tau huay and served in light syrup with seeds of ginkgo floating, although it can also be seasoned with sweet ginger water, in which case it is served hot.

As the literal translation of his own name indicates (turtle essence jelly) It is a dessert made of ground turtle shell, specifically the species of striped box turtle, mixed with sarsaparilla.

Its texture is similar to that of the jelly and is black. Since this species of turtle is currently in serious danger of extinction, guilinggao has been marketed with substitutes for this ingredient.

It consists of a frozen ice cream ball at a lower than normal temperature that is coated in raw egg and covered with crushed cookies or cornflakes. Once this is done, fry for a few minutes.

It is possible that the ice cream does not melt while it is fried thanks to the low temperature at which it is frozen. As for its presentation, several ingredients can be added according to taste: cinnamon, icing sugar, honey, vanilla, syrup, etc. 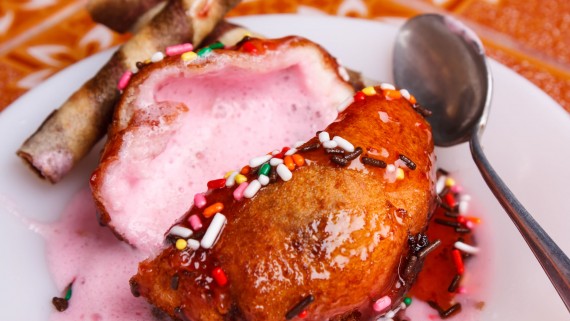 It can be done with different aromatic herbs, although usually boiled mint leaf is used. Potassium carbonate is added and then frozen until it acquires the consistency of jelly, which is similar to gelatin. It can be taken alone or can also be added in drinks. It always takes cold. 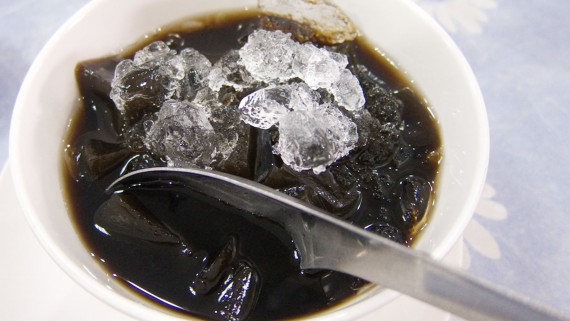 The name of this dessert, which can also be found written all together (Niangao), literally translated by sticky cupcake, although there are other denominations such as rice cake, for its preparation based on glutinous rice, or chinese new year cake, since it is mostly taken in the celebrations of the Chinese New Year.

It can be served in a mold, in which case it will take the form of the mold, or it can also be shaped in the form of an animal or any other object. 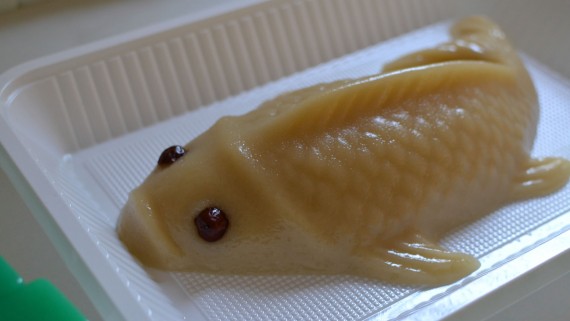 This sweet is original from the Manchu cuisine (belonging to the Manchu ethnic group). The traditional recipe is made with the following ingredients: stone sugar, flour and butter. The Cantonese version adds dried dried coconut and in Fujian sesame, granulated sugar, vegetable oil, malt sugar, milk and egg are also used.

If the dishes mentioned above are representative of Chinese cuisine and culture, teas and spirits are another common element in the day-to-day life of the country, which, far from being merely drinks, is a lifestyle for Chinese citizens.

The aroma of Green Tea It is characteristic of Chinese culture and is taken in celebrations, special events or even to apologize, since it represents values ​​such as well-being, harmony, serenity and beauty, among others. 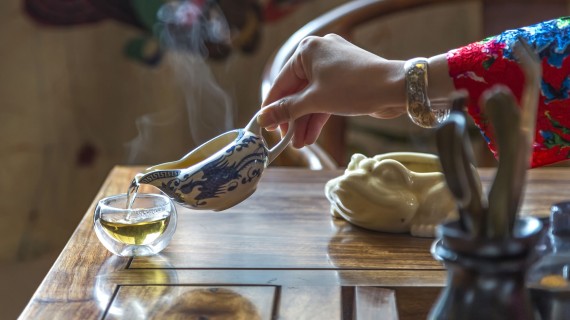 At present, China is the leading producer of green tea worldwide. There is a wide range of green tea varieties, among which the Lung ching, considered the most popular internationally. Your name means dragon pitIt has a sweet taste and its appearance is golden in color.

In addition to tea, the famous herbal liqueur, which is made from the Chishui River water, located on the Sichuan border, is also very popular. It can be made with flowers or with different aromatic herbs. 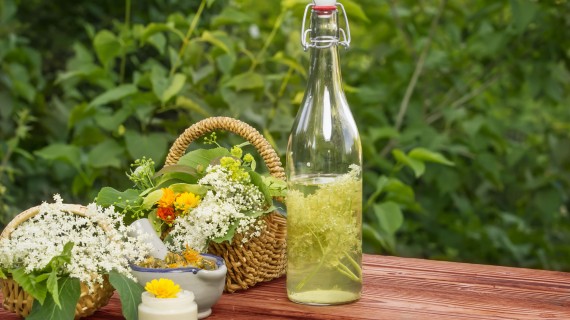 Also Chinese wine, known as white wine or Baijiu (pronounced /pae-lloo/) is a traditional alcoholic beverage in China. Although it is given the name of cameIt is actually a liquor made from rice, which has between 40 and 60% alcohol. It has an intense sour taste that is reminiscent of the Spanish pomace or the Italian staple. The best known brand of Baijiu is Moutai.

This article has been shared 1089 times.