The ancient Egyptian civilization was one of the most relevant in history. Their culture revolved around the Nile River, which provided everything they needed. In this article, we talk about its general characteristics, as well as the importance of religion and the division of social classes.

The geographical space that occupied the ancient Egyptian civilization was the Nile River Valley and Delta, to the northeast of Africa. This area was called Kemet, what does it mean black earth, since it was fertile. In contrast, the desert was known as Desheret, What is it Red land.

This empire lasted around 3,000 years, time that can be divided into different periods, which we find here ordered chronologically:

The main cities were characterized by their position, not by their size. There are hardly any remains of these cities, only of the great constructions. 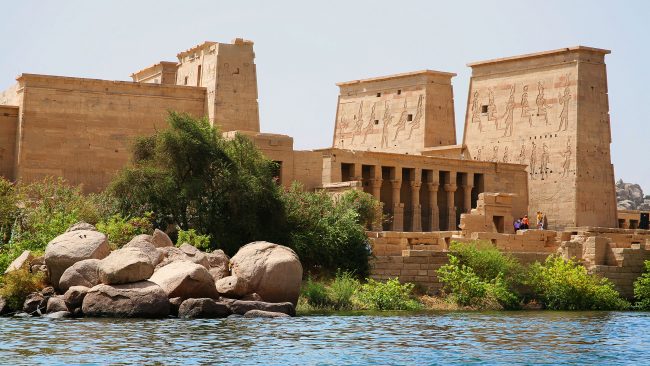 The most relevant was Memphis, because it was located between the Nile Valley and the Delta. It was the capital from 3100 to 2040 BC. It was the administrative, economic and religious center.

Thebes was to the south and was capital from 2040 BC. until about 1300 B.C. Ruins such as the Temple of Luxor are preserved. Another prominent city was Aketatón.

One of the bases of the economy was agriculture. Thanks to the flooding of the Nile, which occurred between June and September, the land was abundantly fertile, so cereals, vegetables, and flax were grown. 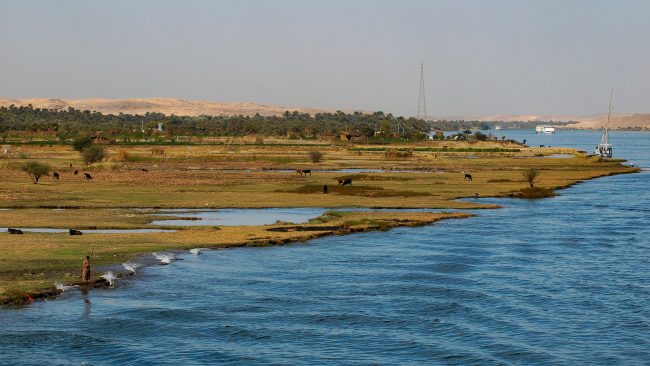 To control these floods, a system of ponds and irrigation canals was organized. Likewise, cereals were stored in barns for conservation.

They also had their own livestock, which was varied. Among the different species, they raised cows, pigs, sheep and birds. Every year all animals were censored so that the owners paid the corresponding taxes.

On the other hand, crafts were produced: pottery, jewelry and textiles. A part of these utensils were exported, since the Commerce with other regions it was important. Even materials, such as Biblos wood, were imported.

Religion was a way of life for the Egyptians, as it was present at all times. Their ideology was polytheistic, since they worshiped a multitude of gods, which controlled the elements and phenomena of nature. 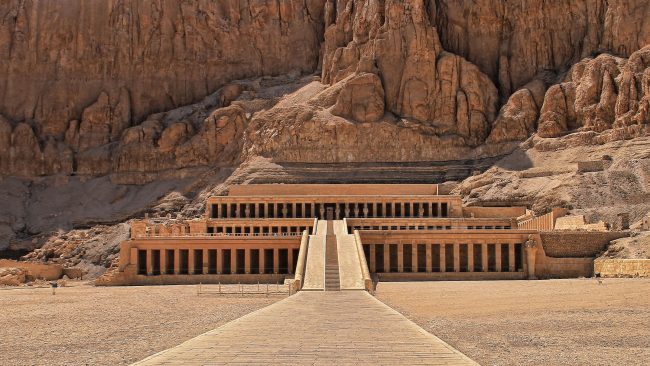 They believed in the immortality of the soul and life after death. To achieve this, the body of the deceased must be well preserved, so mummification was performed.

Depending on the era of the empire, each divinity was given more or less importance. However, these were some of the main gods:

At present, we can find numerous drawings and representations of these figures, such as the ones we have below: 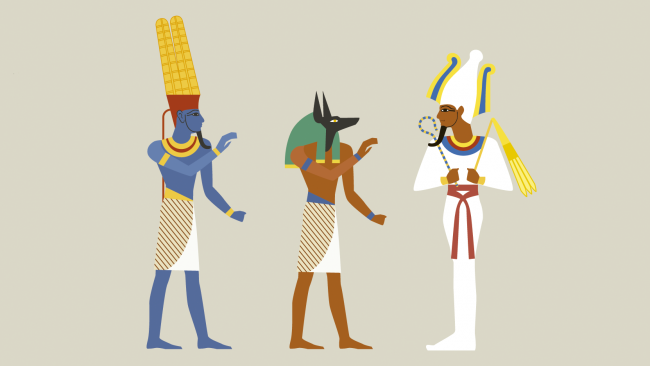 On the other hand, the Egyptians led a life in the open air, as the weather was warm. At the beginning, the clothing It was made with cotton, but later the linen became the predominant material. The most used color was white.

The workers worked naked or with a loincloth. As for royalty and royal scribes, the entire body was shaved, including the eyebrows.

The men wore a short skirt known as schenti, which was fitted with a leather belt. The upper class women wore a long and tight dress, the kalasiris. They protected themselves from the sun with a short layer. The lower class wore wider clothes.

In the following drawing we can see an example of the clothes worn by the pharaohs and nobles of this civilization: 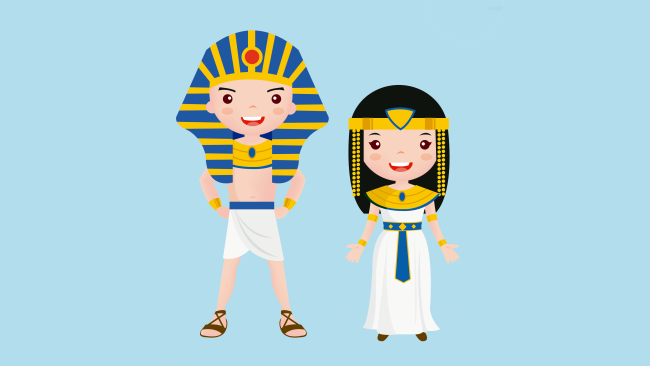 The social structure of ancient Egypt was pyramidal, that is, it was hierarchical. At the top of the cusp was the pharaoh, who was considered to be chosen by the gods. He must maintain the order of the kingdom, as well as the happiness of the divinities.

If you want to know which were the most important pharaohs in history, as well as their lifestyle, we recommend you read the following article: Pharaohs of Ancient Egypt. 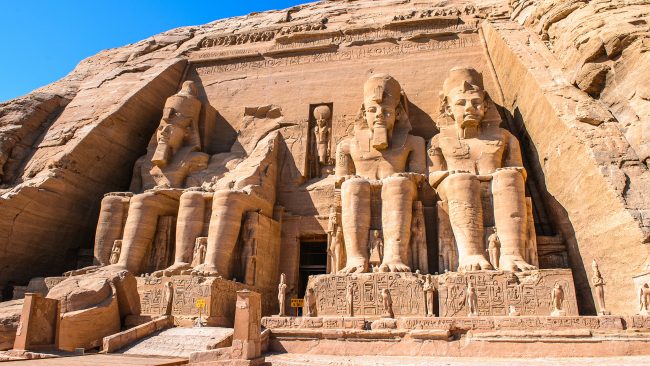 Under him was the upper class, which was formed by different sectors of society:

The middle class was made up of merchants, doctors and artisans. The latter were carpenters, jewelers, painters, sculptors, etc. Sometimes, they concentrated on small workshops.

As for the lower class, we first find the peasants, who worked for the pharaoh or the nobles in exchange for clothes and food. They lived in small houses built with mud. In the following photo you can see the different tasks they developed: 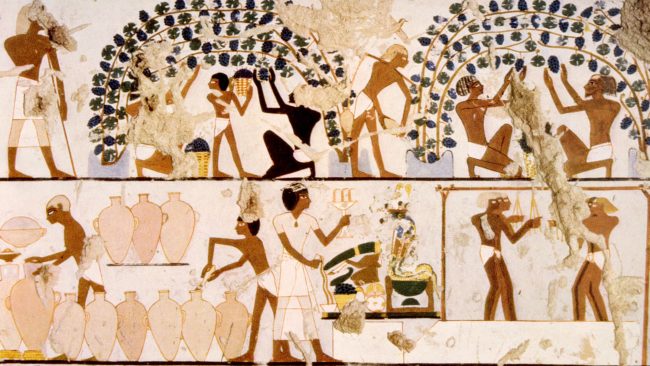 Finally, there were the slaves, who used to be prisoners of war. They worked in the houses of the nobles, in the royal palace or in the temples, although they could also do it in the mines.

The legal organization was composed of a supreme magistrate, the rest of the magistrates and the courts. They worshiped Maat, the queen of justice. They had their own rules, although no code of Egyptian laws is known.

Food in ancient Egypt depended on the flooding of the Nile River and the absence of pests. However, they did not usually go hungry and all classes owned food to a greater or lesser extent.

Its cuisine had two basic products: the bread and the beer. There were different types and they were consumed by all the inhabitants. They also ate vegetables like onion and lettuce, and legumes such as chickpeas and lentils. 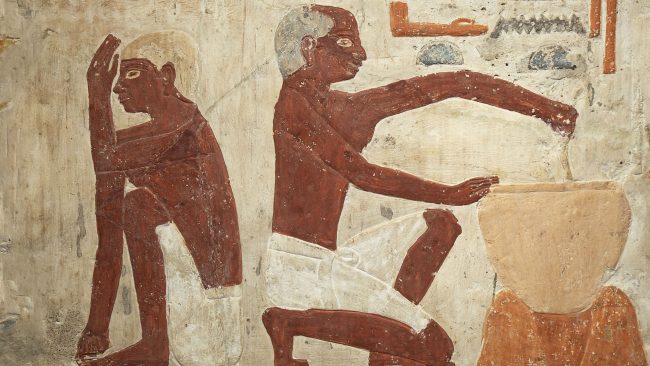 As for the meat, the cow was reserved for the upper classes, while the rest consumed sheep, pig, goat, goose or duck. Eggs and milk also served as food.

Likewise, fish from the Nile was cooked, such as perches, carps and mullets. If left over, dried or salted so that it could be kept in optimal condition.

Another drink was wine, but it was considered a luxury item, so only Pharaoh and his relatives enjoyed it. There were different wines, such as fig derivatives or dates.

The lower class made two meals a day and did not usually have meat. The middle class had it more within reach. As for the nobles, they ate three times a day and had beef, an exclusive delicacy.

This article has been shared 25 times.