The culture of ancient Egypt is admired and studied throughout the world. The writing system of this era varied over the centuries, although the best known type is the hieroglyph. In this article, we explain the history and characteristics of each method.

Types of writing of ancient Egypt

The Egyptian language was present since 3,000 B.C. until the fourth century A.D. Therefore, it was used during thousands of years and underwent different modifications.

Its meaning was a mystery until, in 1799, an expedition from Napoleon discovered the Rosetta Stone, a large rock in which a text written in ancient hieroglyphic, demotic Egyptian and ancient Greek appears. 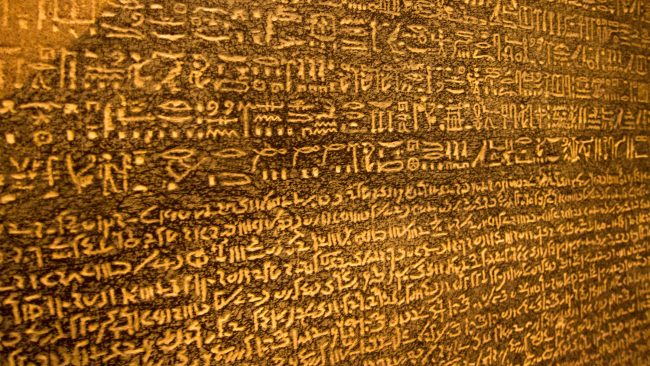 Thanks to this, Jean-François Champollion was the first person to decipher the Egyptian writing, specifically in 1822. Since then, interest in this culture has never slowed.

Next, we explain the different types that occurred throughout the history of ancient Egypt, as well as their evolution and characteristics.

Hieroglyphic writing was the first to develop. It derives from the pictography, in which objects are represented based on drawings. In total, this way of writing had about 750 signs. This system is interesting for many people and even for children.

The writing system was complex, as it was made up of three distinct components:

In the case of this image, we see the sign of the Eye of Horus, which symbolizes the triumph of good over evil. On the other hand, we can observe a circle on the god Ra, which is called Shen and represents eternity. 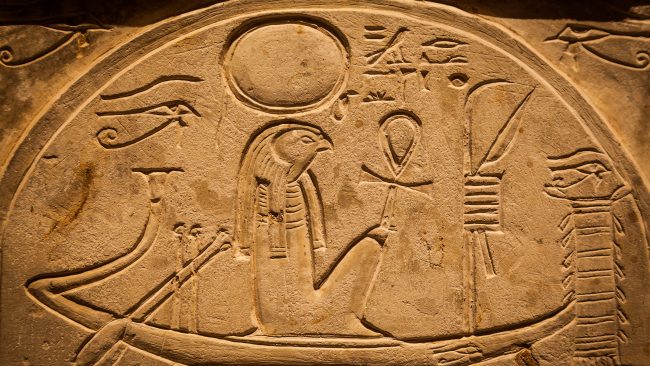 Due to their difficulty, most of the inhabitants could not read the hieroglyphs, only the priests, the army officers, the officials, the scribes and the pharaohs.

This type of writing was used to make inscriptions on monuments, pyramids, sarcophagi, tombs and sculptures. Therefore, it was an essential element of art. It had a sacred value, as it was known as the «language of the gods«.

Texts were written in any way, except from bottom to top, and phrases were organized in lines and columns. There were no punctuation rules, so the signs were grouped into squares. To indicate the beginning of the text, a human or animal form was drawn. In the following photo you can see an example of inscription elaborated in horizontal. 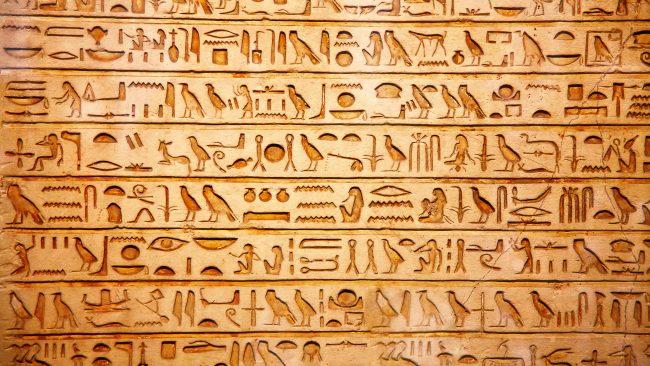 No remains of Egyptian musical writing have been preserved, since although this was important in religious ceremonies, it was transmitted and taught orally, without expressing anything in writing.

This type of writing is an abbreviated form of the hieroglyph and was used in a complementary way to it. Is more simple, which makes it easier and faster to represent it.

To write a sharp cane was used as a brush and black ink. Red ink was reserved to highlight words or passages in the text. At first it was written from top to bottom, but later it was done horizontally and from right to left. 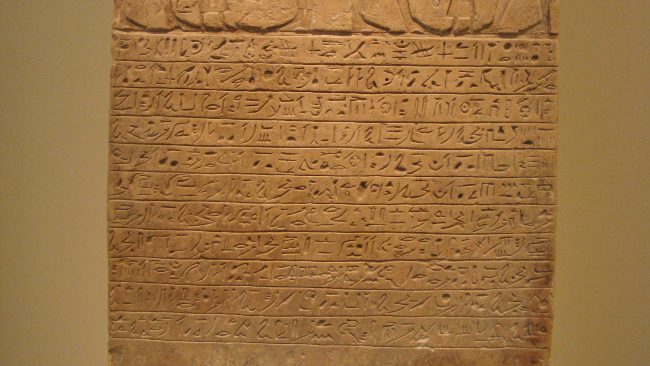 It was intended to be the way of writing religious, administrative, scientific and literary texts. Therefore, it was commonly used by scribes and priests.

The most used materials were papyrus and ostracas, ceramic fragments. Likewise, texts embodied in linen, wood, stone and leather have also been discovered.

It is an abbreviated form of the hieratic and the latest Type of writing exclusively Egyptian. It was developed from the seventh century B.C. and continued until the 4th A.D., when it was replaced by the Greek.

It is considered an abbreviation of the spoken language. The signs were more schematic and had a faster and simpler layout. It was written from right to left on materials such as papyrus. 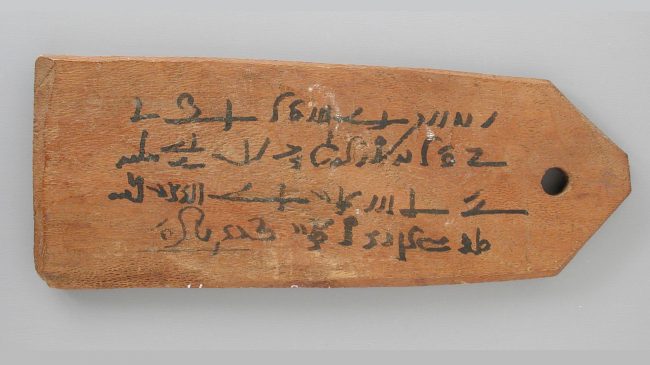 It was used on a daily basis, commercial transactions and literature, so the hieratic only continued to be used for religious texts.

In the last phase of ancient Egypt we find the Coptic script, which has its origin in the second century B.C. Years later it was used by Christians who lived in that area.

It was formed by the different letters of the Greek alphabet, in addition to six demotic characters, since some sounds used did not have their Greek equivalent. 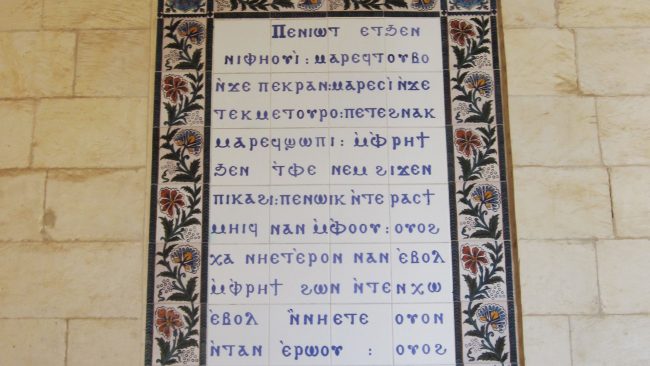 During this time there were two dialects different. The sahídico, own of the High Egypt, and the boháirico, of the Low Egypt. Its use declined to give way to Arabic in the seventh century.

Therefore, in Egypt, Egyptian Arabic is used as the official language, which has nothing to do with the writing of the ancient empire. In some areas Berber and Nubian language are also practiced. Coptic is used in the liturgies of Coptic Christians.

The Egyptians also had their own number system and performed mathematical operations. In addition, the alphabet was an essential part of their language.

In ancient Egypt numbers were represented, from one to millions. They were the first to develop the numbering system decimal, that is, based on the number 10.

They could be written both in numerical expression and in word, although only the words of number one and two were used. The names of the numbers from one to ten were the following:

They used to be represented in papyrus or ostraca, so they used more hieratic writing than hieroglyphic. The Egyptians also had ordinal numbers and are considered the parents of the advanced math.

To represent a sum, they used the hieroglyphic sign of the feet pointing in the direction of the writing. To subtract, they drew these feet in the opposite direction.

On the other hand, to indicate a fraction, they drew the mouth symbol. To represent the fractions, they used the parts of the Eye of Horus symbol. For example, 1/4 was a circle, corresponding to the pupil of the eye. The following drawing shows which part belonged to each fraction: 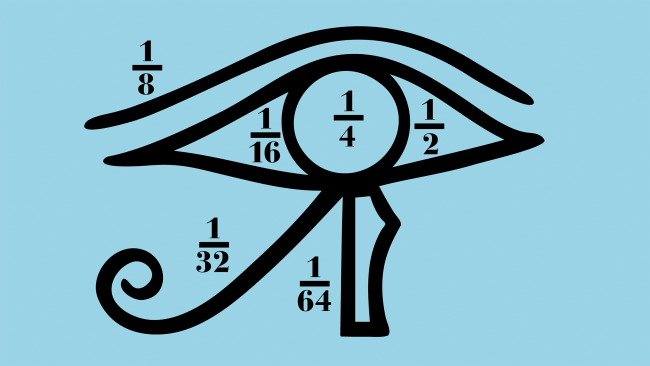 As we explained earlier, the Egyptian writing was made up of ideograms, phonograms and determinatives. It is the phonograms, the representation of sounds, that make up a kind of Egyptian alphabet.

This alphabet has no vowels, it is formed by 24 consonants. Has great historical relevance, as it inspired later cultures. The Phoenicians were the first to use the alphabet as the sole basis of their writing.

The symbols to represent these consonants are varied. Animal forms predominate, such as birds and reptiles. We also find numerous parts of the human body, such as the leg, arm or hand.

This article has been shared 162 times.