In the population of San Lorenzo del Escorial, on the slope of Mount Abantos, at 1,028 meters of altitude, on the Sierra de Guadarrama, is the Royal Site of San Lorenzo de El Escorial. With an approximate area of ​​33,327 square meters, declared Heritage of humanity by unesco. 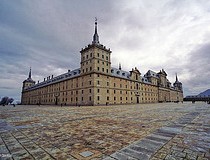 It was the political center of the empire of Philip II. Started at the end of 1562 according to projects of Juan Bautista de Toledo and Juan de Herrera. Of sober architecture but full of great symbolism.
Inside they highlight the Royal Apartments of the Austrias, of great austerity, which contrast with the The Bourbons Palace, richly decorated with tapestries on cardboard Goya and furniture of style Carlos IV and Empire. 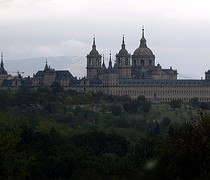 It is important to see The Pantheon of Kings, an octagonal mausoleum under the main altar of the Basilica, decorated with black marble, red jasper and golden bronzes. There the monarchs and the mother queens of Rey rest, from Carlos I to the present. The Architecture and Paintings museums with works by Italian painters like Zuccaro, Tibaldi and Cambiaso that painted the vaults of the Library, Sacristy, Chapter Rooms, Lower Cloister, Main Staircase and the Battle Gallery. There are also several paintings by El Bosco, paintings by El Greco and the great cycle of fresco paintings by Luca Giordano in the vaults of the church and of the Stairs. 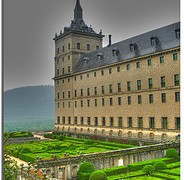 It opens its doors from Tuesday to Sunday between 10 am and 6 pm. General admission costs € 10 but there are numerous discounts.