The gastronomy traditional of Norway It comes out of everything that can grow in the Nordic climate, that can be saved and that contains enough energy for the population. Examples of the products used are: bread with yeast and without it, porridge, soups, potatoes and meat Red and white smoked or salted.

Between the typical dishes most popular are the “tørrfisk” and the “klippfisk”. Both are dishes whose main ingredient is cod. The difference is that the first is eaten dry and in the second salty. The national dish par excellence is the “fårikål”, which consists of a saucepan with meat of veal and cooked cabbage.

Haute cuisine includes hunted animals and fresh fish. Medallions, steaks and meatballs of deer and elk have an international reputation and can be found in the best restaurants in Norway. Smoked or fresh salmon varieties are also highly appreciated. Because of the strong taste of these meats, they are sometimes accompanied with cranberry jams. Potatoes and onions are also popular accompaniments. 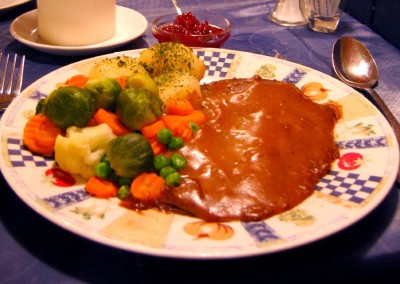 The meat Whale has ceased to be on the table of Norwegians for the high price and how easy it loses its flavor. However, a delicacy that is still consumed is the “ribbefett” whale rib butter with “gammalost” cheese (strong flavor cheese, similar to Roquefort) and bread.

The pastry The country also enjoys some global popularity. An example is the “lukket valnøtt”, a marzipan cake covered with whipped cream. As to cheeses, the “geitost” – made with smoked goat cheese – has the texture, flavor and color of peanut butter. It is one of the favorite and most popular cheeses of Norway. 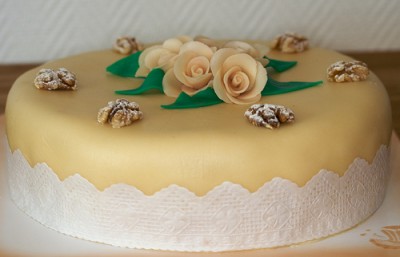 As to alcoholic drinks, perhaps the one that stands out the most is the “aquavit”. This originates from the Nordic countries and from Germany, but the Norwegian variety is quite different from the rest. They are made of potatoes and left to age in sherry barrels. In addition, ingredients such as cumin and anise are added. In total there are 27 varieties of «aquavit».