The Grand place it is the tourist heart of Brussels. In its buildings are the city hall offices, and several museums. Measure 68 by 110 meters. Has been declared World Heritage by UNESCO.

In the space where the Grand place It was always a commercial space of the city in the Middle Ages (in fact the city grew as the market became more important). After the bombing by French troops – who sought to end the siege of the then French city of Namur – which demolished almost all the old buildings, the Grand place It was rebuilt to what it is today.

The reconstruction task was in charge of the city guilds under the supervision of the councilors and the Governor. That is why the set of buildings is in harmony despite the diverse styles it has (Gothic, Baroque and Louis XIV). 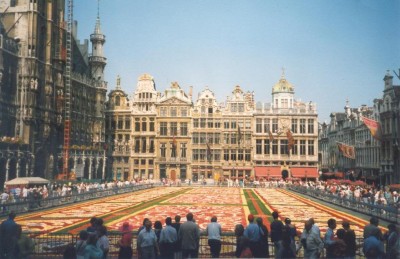 In the 18th century the Grand place He was sacked by revolutionaries. Before the destruction, the State expropriated the buildings, but they were abandoned and neglected anyway. Only in the nineteenth century, Mayor Charles Buls – whose name now shows one of the streets to the monument – had the Grand Place restored to its former splendor. In 1998 the UNESCO he declared it World Heritage.