In its more than eighty kilometers of extension, Sierra Nevada, mountainous massif located in Andalusia in Spain, it is a natural space of great importance for the ecosystem with the title of Unesco Biosphere ReserveIn addition to being considered a large part of its territory as natural Park due to the wealth of flora, botany and landscaper it possesses.

Sierra Nevada It has its own climate Mediterranean high mountain cities, having an average temperature ranging from 16 ° C at an altitude of 1500 meters (Trevélez) to 0 ° C at 3000 meters; By having an arid climate its temperatures on winter nights can reach around 10 ° C.

East Mountainous massif It offers us different microclimates – due to its demographic structure – that go according to the height that is reached. If we are fond of Green tourism and outdoor activities, in Sierra Nevada We can perform activities such as:

Snow fusion paths. Following these routes in Sierra Nevada we can travel the mountains and even snow areas, that depending on the type of traveler we are, that is, there are routes for fans and routes for those who practice mountain tourism and trekking regularly. These routes can be done with or without a guide because they are safe areas surrounded by vegetation. Each route leads to different places, the ones leading to the Laguna de las Yeguas, the Virgen de las Nieves, and the Loma de Dílar. 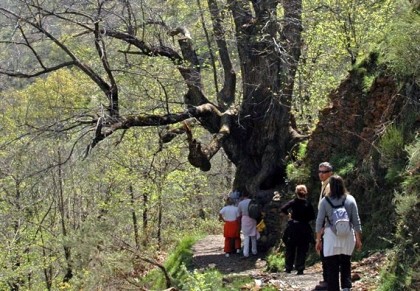 High fountain In this Sierra Nevada area we will find at Ethnographic Museum, the same where we can learn about the customs and practices of the ancestors that inhabited this Mountainous massif. This area is surrounded by pine forests and, although, it is ideal for those looking for routes where they ride a mountain bike, it has routes for cyclists and walkers.

Sulayr route. The Sulayr Route It is important because it is an axis that unites the different paths of the path of Sierra Nevada. This route has more than three hundred and fifty kilometers and almost twenty sections, which have been classified as high difficulty.

Sidewalk of the Star. On this trail we will have one of the best panoramic views of the northern area of Sierra Nevada.

Integral of Sierra Nevada. This is one of the best known routes in Sierra Nevada and runs almost all the peaks over three thousand meters high in the area, so it is a green route not recommended for amateurs because it requires a good physical training to perform the tour to the Sierra Nevada integral which begins in Jérez del Marquesado and ends in Nigüelas.