The “city ​​of the perpetual roses“, This is what they call this incredible place that was recently chosen among 631 places as the best tourist destination 2009 by the famous British magazine”Wanderlust”, The decision was made by the more than 100,000 readers, according to the level of satisfaction found in each place, the readers said that this was a very special city since it has qualities such as that it is surrounded by 3 volcanoes which can be Go exploring, the weather that stays at temperatures between 22 and 18 degrees almost all year. 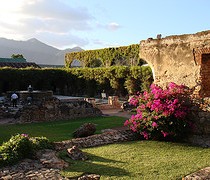 Antigua is famous for its well-preserved Spanish Renaissance architecture with baroque facades of the New World, as well as a large number of spectacular church ruins. It has been designated a World Heritage Site by Unesco in 1979.
It was the third headquarters of the capital of the so-called kingdom of Guatemala that included the states of Guatemala, El Salvador, Honduras, Nicaragua and Costa Rica as well as Chiapas, a part of Mexico. It was built from 1543 by the engineer Juan Bautista Antonelli in the Panchoy Valley, where it was moved after the destruction by flooding of the second site, located in the Almolonga Valley, on the slopes of the Water Volcano (where there was taken after leaving the first settlement in Iximché in 1527). During its development and splendor it was known as one of the three most beautiful cities in the Spanish Indies. 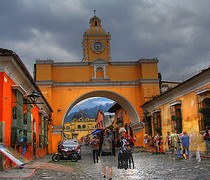 Nowadays Antigua is notable for its very elaborate religious celebrations for Holy Week, which precedes Easter. There are also many Spanish language schools in Antigua; It is one of the most popular and best recognized places in Latin America where Americans and Europeans go to study Spanish.