The Harbor Brigde It is located in the city of Sydney, Australia. This bridge is located over the city bay. It links the financial center with the residential and commercial area of ​​northern Sydney. The distance from the Sydney Bay to the bridge is 134 meters.

It is the longest bridge in the world, with 503 meters in length. 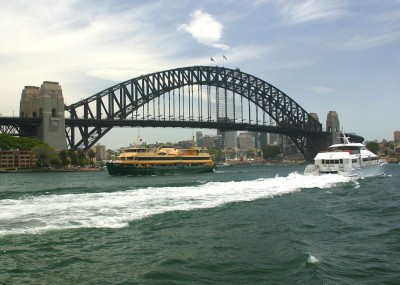 The bridge was inaugurated in 1932, and it took 8 years to build it. It is the Sydney Harbor bridge. The company responsible for the construction of the bridge was Droman Long and Co under the command of engineer Bradfield, who was in charge of the design. 1600 workers worked in construction.

The Harbor Bridge consists of eight lanes for the passage of vehicles, in addition to a cycle path, a pedestrian lane and two train lines. Every day around 161,000 cars pass through the bridge. 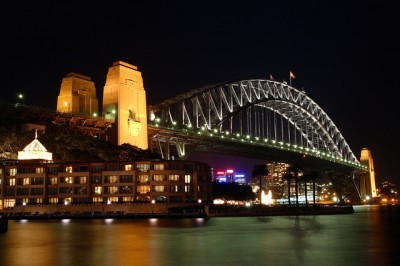 The bridge has been built with steel arches, some 53,000 tons of this material and more than six million screws. From the bridge you can take very good pictures of the great boats that pass through the sea. People in the New Year go to the bridge to take pictures of the sea lit by the fireworks that are observed on that date.

It is also an excellent place to take panoramic photos of the city; pictures of Opera house, the sea and the city.

One of the activities to do is participate in a guided tour where you can ascend to the bridge in an average of 3 hours.