The name of the Anthem of the Republic of Ireland It’s Amhran na bhFiann. The Irish translation is “A soldier’s song.” The music was composed in 1907 by the revolutionary poet Peadar Kearney and the composer Patrick Heeney, the lyrics were written by Kearney. It was just published in 1912 in the republican newspaper “Irish Freedom”. The song replaced the anthem unofficial “God Save Ireland”. Only the choir is sung and in Irish.

As expected, the lyrics are revolutionary dyes. He urges people to participate in the struggle for the end of the English hegemony. Mention is made of the initial rebellions and the support of the people of the United States (“a country beyond the waves”). 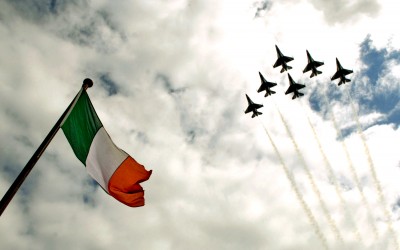 Soldiers are we,
whose lives are pledged to Ireland,
Some have come from a land beyond the wave,
sworn to be free,
no more our ancient sireland,
Shall shelter the despot or the slave;
tonight we man the Bearna Baoghal,
In Erin’s cause,
come woe or weal;
Can Mid cannon’s roar and rifle’s peal,
We’ll chant a soldier’s song.


The Song of a Soldier (Spanish)

We are soldiers
You have sworn your life to Ireland.
Some of us came from a country beyond the waves.
We have sworn to be free.
Never again the land of oppression
will take refuge from the despot or the slave.
Today we cross the deadly pit
For the cause of Ireland,
even if there is pain or injury;
Between the roar of the cannon and the bullets,
We will sing a song of the soldier.