The National anthem of Peru It is considered one of its national symbols, along with its flag and National Shield. 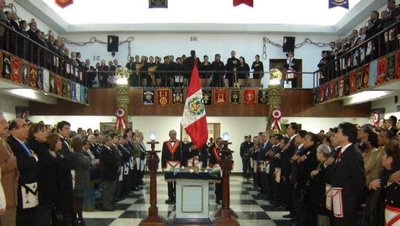 The lyrics were composed by José de la Torre Ugarte and the music by José Bernardo Alcedo: being performed for the first time by Rosa Merino on September 23, 1821 in the presence of the liberator Don José de San Martín.

At present the choir is considered the most significant part of the anthem, given that, a great feeling of patriotism among Peruvians originates in singing “We are free, let us always be”.

It is common that only the first stanza and the chorus are interpreted, but the hymn includes seven stanzas:

We are free, let’s always be
and before deny their lights the sun,
that we miss the solemn vote
that the homeland to the Eternal elevated.

Long time the oppressed Peruvian
the ominous chain dragged;
condemned to cruel servitude
Long time in silence he groaned.
But barely the sacred cry
Freedom! On its shores it was heard,
slave indolence shakes,
the humiliated cervix lifted.

Already the rumble of fierce chains
that we hear three centuries of horror,
from the free to the sacred cry
Who heard the world stunned, ceased.
Everywhere inflamed Saint Martin,
Freedom, freedom, he pronounced,
and rocking the Andes base
They announced it, also to a voice.

With their influence the peoples wake up
and which ray ran the opinion;
from the isthmus to the land of fire
From the fire to the icy region.
Everyone swears to break the link
who denied both worlds,
and break that scepter that Spain,
reclined proud in both.

Lima, fulfill that solemn vow,
and, severe, his anger showed,
to the helpless tyrant throwing,
that tried to extend his oppression.
They crickets sealed their effort
and the grooves that it repaired itself,
he was hated by hatred and revenge
To inherit from his Inca and Lord.

Compatriots, no longer see her slave
If humiliated three centuries he groaned,
forever swear it free
Maintaining its own splendor.
Our arms, until today unarmed
are always priming the cannon,
that one day the beaches of Iberia
they will feel terror from their roar.

Let’s excite the jealousy of Spain
Well, feel with waning and rage
That in contest of great nations
Our homeland will enter paragon.
In the list that of these is formed
We will fill the region first
That the ambitious tyrant Iberino,
That America all ravaged.

On top of the Andes hold
the bicolor flag or banner,
that the effort be announced forever
That being free, forever gave us.
In his shadow let us live in peace,
and when the sun rises on its summits,
let’s renew the great oath
that we surrender to the God of Jacob.

Here is a video of the National Anthem of Peru performed by the UPAO Choir of Trujillo and Dolomiti di Trento of Italy: