Guayaquil is an important city in Ecuador where tourism is increasing thanks to the many attractions it has. In this article, we show you which tourist places you should visit, ordered from least to most interesting.

They are ideal to go, alone, as a couple or with children. Whether you are going to be alone for a day or weekend, or if you plan to stay longer, these are the places you cannot miss:

The botanical garden of Guayaquil was inaugurated in 1979 and in its five hectares of extension a total of 324 vegetal species meet, in addition to different birds and butterflies. It is open every day from 08:00 to 16:00.

The Municipal Palace is located where the Town Hall used to do it, in which the Act of Guayaquil's independence. It was built in the 20th century and is of the Renaissance style. 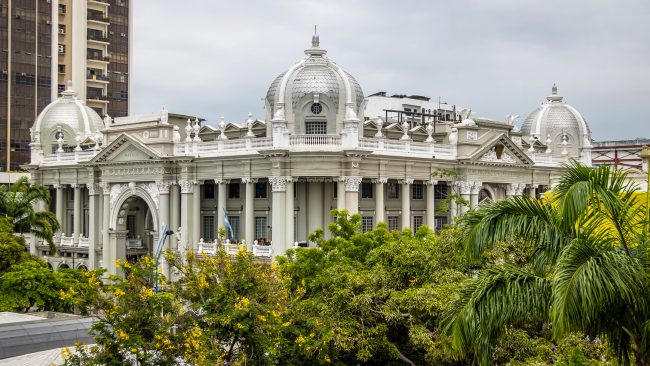 The Roundabout Hemicycle is also called Monument to the Liberators Simón Bolívar and San Martín. This one commemorates the meeting in the city between these two two people, in the episode known as Guayaquil interview, in 1822. 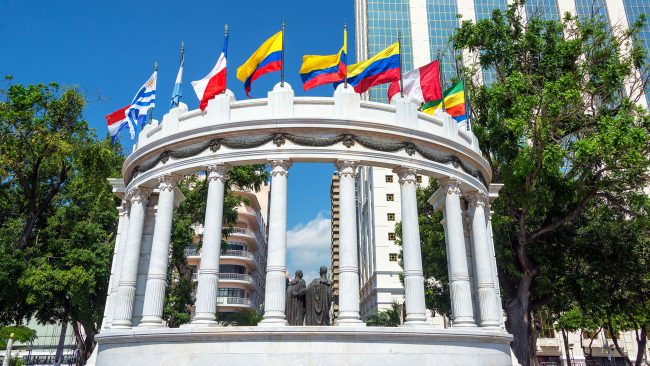 The Forest Park has a total of 10 hectares and in its interior we find a lake of 450 meters, as well as the Eloy Alfaro Civic Center Theater, founded in 2009. In the past, this area was occupied by a racecourse.

11. Malecon of the Salado

Since 2009 we can enjoy this seawall where gardens and viewpoints are not lacking. It's open everyday from seven in the morning until twelve at night.

The Historical Park of Guayaquil has recreations of traditional architecture, as well as rural and urban life that we found in the past. It is open every day and the entrance is free. 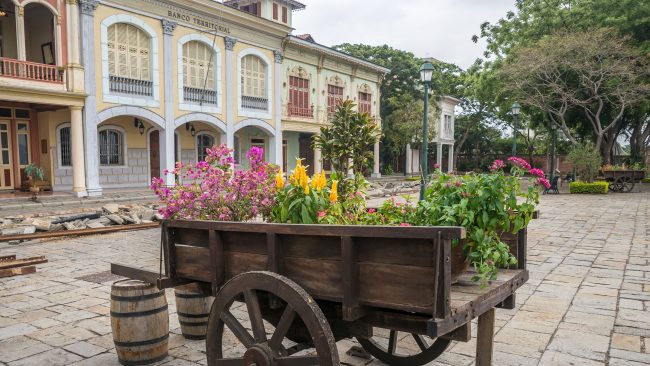 The Metropolitan Cathedral, whose official name is San Pedro CathedralIt was built in the 20th century in the same place where the first church in the area used to be. It is neo-Gothic. 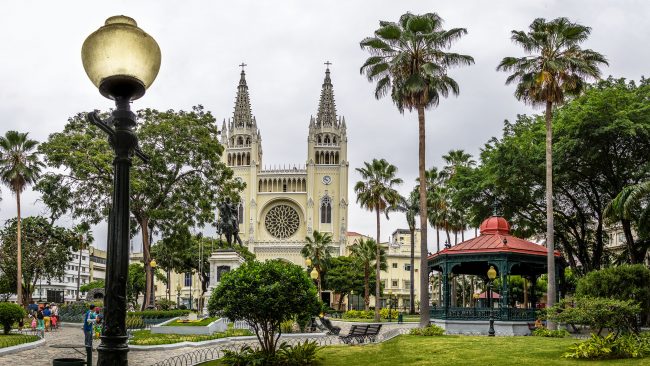 If you are looking for a large natural area around Guayaquil, a good option is the National Recreation Area Parque Lago, 20 km from the city. It has 40,600 hectares and, among the fauna that can be observed in it, there is a total of 160 species Different from birds.

Another of the most prominent natural areas that are located near Guayaquil is the Cerro Blanco Protected Forest. In it we find specimens of lemon green macaw, a bird found in Danger of extinction. If you want to know other threatened species, we recommend the following article: List of the 15 most interesting endangered animals.

The Malecón Simón Bolívar or 2000 is a riverside promenade that has lush gardens and a wide range of restaurants. In it is the famous Clock Tower, dating from the 18th century. 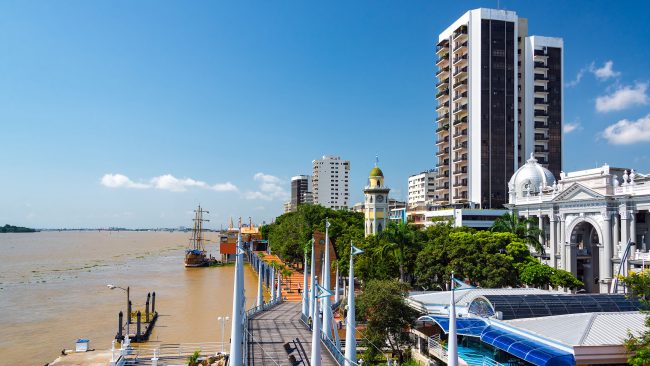 The Centennial Park is an important area of ​​the city that opened in 1920 to celebrate the 100th anniversary of the independence of Guayaquil. In the center of it we observe the Column of the Próceres. In this video you will find some interesting facts about the place:

To access the Santay Island National Recreation Area, you must cross an 840 m long bridge, although you can also go by boat. About 200 people live on this island. 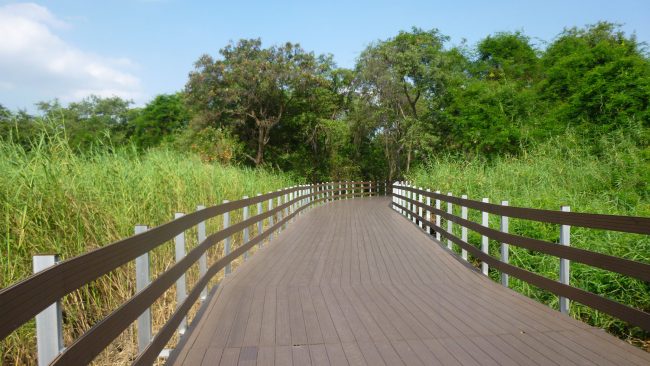 The Santa Ana hill is about 60 meters high and is one of the best viewpoints in the city. It climbs to the top through the Diego Noboa stairway, which has 444 steps. At the top there is a lighthouse and a chapel. 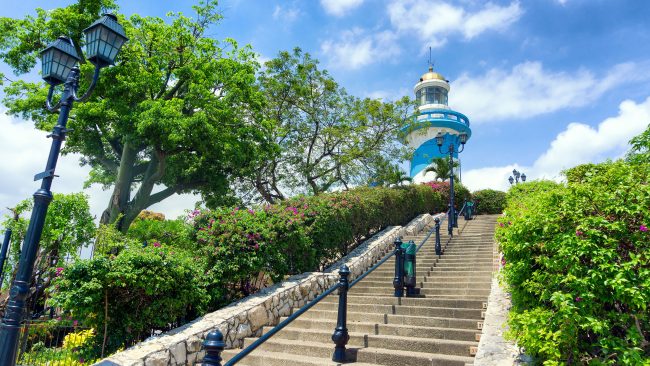 Although his official name is Seminar Park, this area is better known as Iguanas park, since it is full of animals of this species that measure up to one meter. As we can see in this photo, they are calm and harmless. 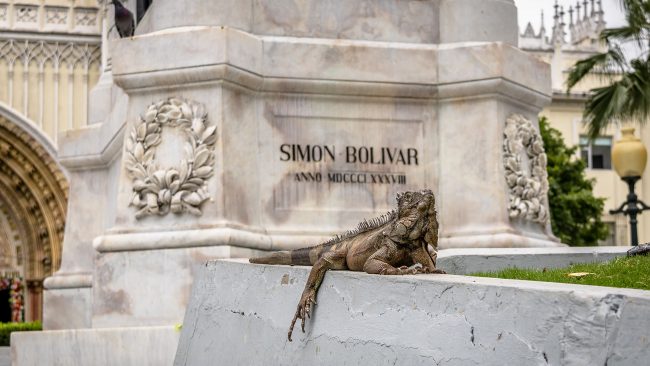 Las Peñas is the first neighborhood It was formed in the city in the 16th century. Their wooden houses were destroyed in two fires that occurred in 1896 and 1902, but they were rebuilt. 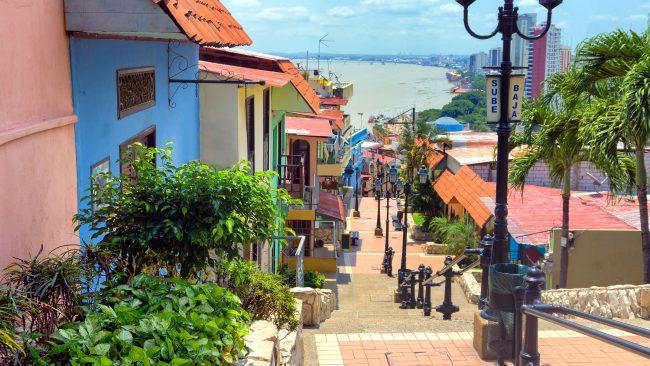 In this video you can learn more interesting facts about this curious neighborhood of Guayaquil:

At first, the inhabitants of the neighborhood were artisans and fishermen. However, afterwards luxury landowners' houses were built. Very prominent people have lived here in Ecuador, including eleven former presidents of the country.