According to your activity, when we say active volcano We refer to an erupting volcano or that is likely to enter a stage of uninterrupted activity at any time. Currently, although it is estimated that there are almost 2,000 on Earth, there are few volcanoes of these characteristics that record periods of continued activity.

The Kilauea (Hawaii) is considered the volcano with the highest level of activity on the entire island of Hawaii, while one of the most active on Earth. In Hawaiian, the approximate meaning of the word kilauea is spitting, due to its strong lava flows. 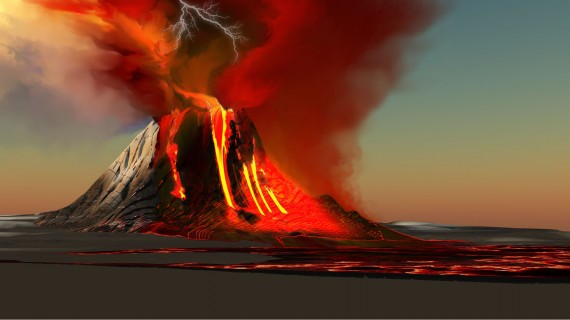 Although it is estimated that it came to the surface of the water approximately 100,000 yearsEverything indicates that it can be between 300,000 and 600,000 years old.

The last period of eruptive activity began in 1983 and lasted until early 2011, this being the longest interval in the eruptive history of this volcano. The following video shows a spectacular time-lapse of the Kilauea volcano:

Python of the Fournaise

Together with the Kilauea, this volcano belonging to the island of Reunion (Indian Ocean) is another of the most active volcanoes in the world.

Since 2006, continuous periods of activity have been recorded in 2007, 2008 and 2010; its last eruption began in June 2014. The long lava flows emitted by this volcano usually reach the sea. 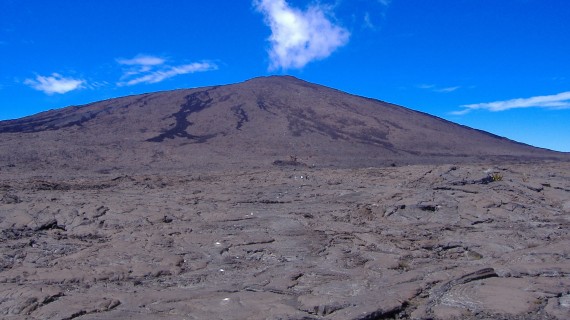 The Etna volcano, located on the east coast of Sicily (Italy), also called Mount etnaWith its 3,329 m high, it is considered the highest active volcano in Europe.

In June 2013, UNESCO conferred the title of World Heritage and it has also been included in the 16 Volcanoes of the Decade by the United Nations. In the following video you can see images of the eruption that took place in 2014:

The eruptive history of Etna goes back 500,000 years and is still dormant today. In addition, it constitutes one of the main sources of research in the science of volcanology, geophysics and other subjects related to the field of Earth Sciences.

It is not considered a particularly dangerous volcano and, in fact, thousands of people live nearby. In addition, the volcanic land makes the terrain of this area very fertile for the extensive agriculture, so you can find numerous vineyards and orchards along the slopes of the mountain. 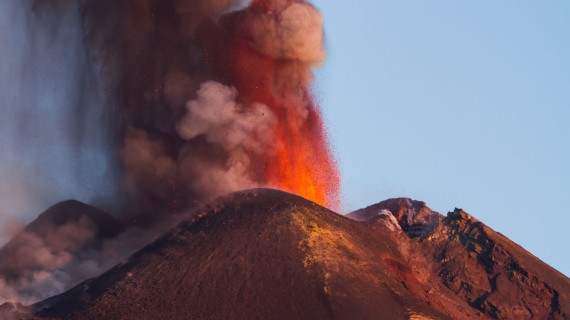 Monte Santa Helena (in English, Mount St. Helens) is the name given to the stratovolcano found in Skamania County, in the state of Washington. The natives of the Klickitat tribe called it Louwala-Clough, which meant something like Fire Mountain.

Although it is still active today and its last eruption happened on July 10, 2008, it is especially known for the catastrophic eruption that took place in May 1980, one of the deadliest in the history of the United States. 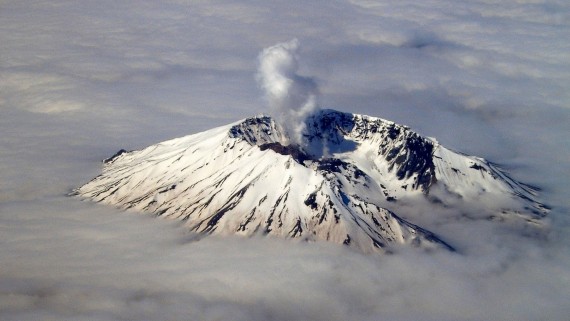 Given its membership in the Cascade Range, the volcano has the same characteristics as other volcanoes in the area: its formation is a large debris cone whose main components are: lava stone, pumice stone, basalt layers, andesite and volcanic ash.

The Andes Volcanic Belt encompasses an entire volcanic province within the region called Pacific Fire Belt, which is discussed below. It is located in the Andes mountain range and loop through Peru, Bolivia, Chile, Argentina, Colombia and Ecuador.

The Llaima volcano is located in the Region of La Araucanía, in Chile. It belongs to the southern volcanic zone (ZVS) of the Andes Volcanic Belt. Is a stratovolcano whose altitude exceeds 3,000 m.

Since it is located just 72 km from Temuco, the top of the volcano can be seen from anywhere in the city. The etymology of the term llaima comes from the Mapuche language and means ditch or drain in relation to the crack that appeared near the crater after the eruption of 1873. 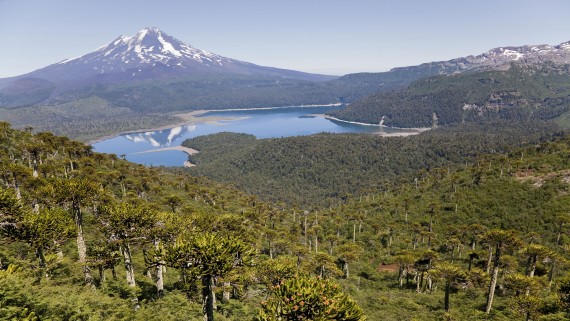 Like many other volcanoes, it is part of a national park, in this case the Conguillío National Park, which especially highlight its araucaria forests.

The resulting landscape makes this national park an important tourist destination within Chile. In addition, it has the ski center The Araucarias.

Between 2008 and 2009 an incessant volcanic activity took place after the first eruption on January 1, 2008, after which up to 140 tourists and several officials from Conguillío National Park were evacuated.

The fumaroles could be seen up to 250 km away and the ashes reached the province of Neuquén, in Argentina. In 2009, the eruption was much calmer, but still unstable.

The Villarrica volcano is located in Chile, specifically in the southern Andes area, between the provinces of Cautín and Valdivia.

This stratovolcano is considered one of the most volcanic activity in all of South America. With an altitude that exceeds 2,450 m, its conical shape is one of the most perfect among all the volcanoes in the world. 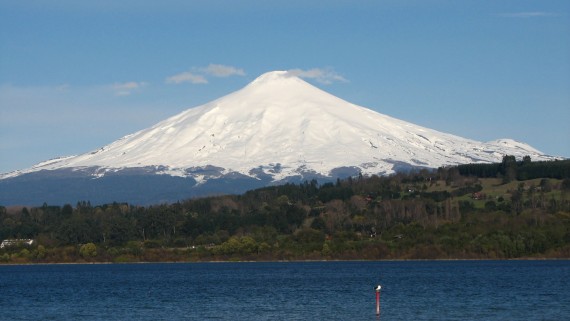 When it is not in a period of activity, the volcano is covered by a glacier, so that the views of its summit are always white.

In addition, the area of ​​the volcano and its surroundings make up the protected area called Villarrica National Park. The last eruption has been recorded as of March 2015 and has required the evacuation of almost 4,000 affected from surrounding populations.

This active stratovolcano is located southeast of Lake Llanquihue, in the Los Lagos region, south of Chile. The volcano as a whole is a composition made from andesite. It is part of the Llanquihue National Reserve.

After 43 years of inactivity since volcanic activity was recorded in 1972, in April 2015 the volcano returned to activity. The following video shows a time-lapse of the last eruption of this volcano:

The Central American Volcanic Arc encompasses a chain of volcanoes that extends from the Pacific coast to the border region of Costa Rica and southern Panama, through El Salvador, Honduras and Nicaragua. In total, the volcanic arch has an extension of 1500 km.

Quezaltepeque or volcano of San Salvador

Currently, it is estimated that there are up to twenty-three volcanoes in El Salvador, although only a few are considered active. The volcanic mountain range of the country is located within the so-called Central American Volcanic Arc, whose extension reaches 1,500 km. The main ones are listed below.

This volcano includes two peaks, called The Picacho and The boar. Its crater is also called The anchovy, whose diameter reaches 1,500m and is located 1,800m high; Its interior area has been considered a National Park and is known as El Boquerón National Park. 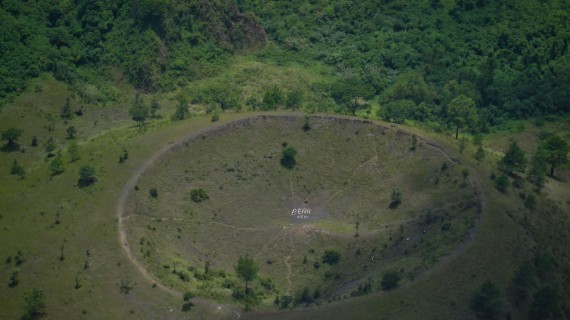 The Santa Ana volcano is located in the Department of Santa Ana (El Salvador) and is part of the Apaneca mountain range, within a tropical cloud-mountainous forest. With its 2,381 meters above sea level, it is the highest volcano in the country. 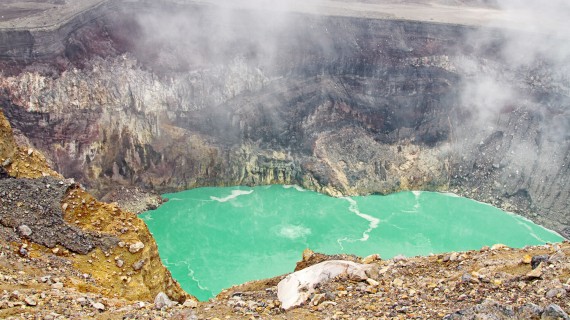 The last eruptions took place in 1920, 1904 and 2005. The 2005 eruption It occurred after a great explosion in which the volcano expelled ash and rocks. In the following video you can see how is the Santa Ana volcano and its surroundings:

Located more than sixty kilometers from San Salvador, this volcano is especially known because at its base it has hot springs that are recognized as the hell. 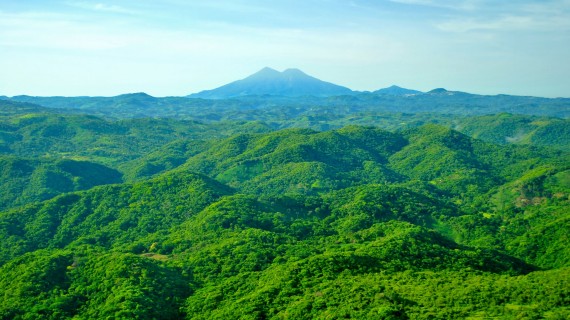 Located in the municipality of San Miguel, this volcano recorded its first activity in 1510 and the last in January 2002. Among the many volcanoes in the country, its cone is considered the best formed of all. Its last two significant periods of activity were recorded in 2013 and February 2014. 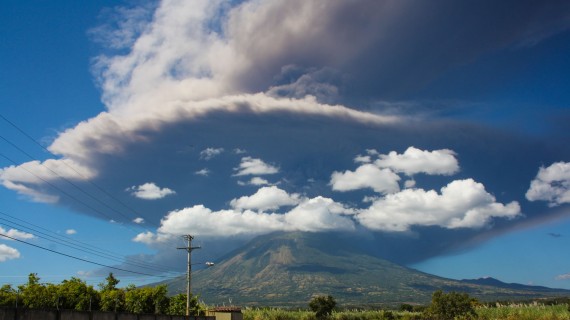 This volcanic group, located on the Kamchatka Peninsula in the Asian part of Russia, forms the so-called Pacific Ring of Fire. Since 1996, this group of volcanoes is considered a UNESCO World Heritage Site. The following sections list the main volcanoes of this region.

Also called Sheveluch or Sopka Shiveluch, is located in the north of Kamchatka. This volcano has a crevice that exceeds thirty meters and its last eruption occurred in August 2011. 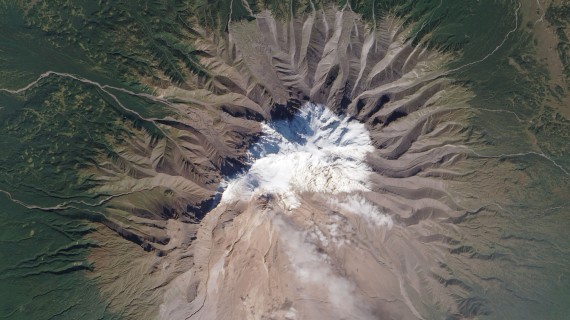 Considered the most active in the eastern part of Kamchatka, it is a symmetric stratovolcano built within a 5 km wide caldera. 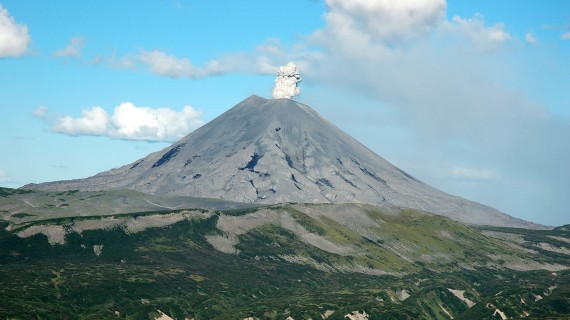 It is also called Mount bezymianny. It was considered extinct until 1955, when its greatest eruption was recorded, which lasted until 1956, reaching 200m from the summit. 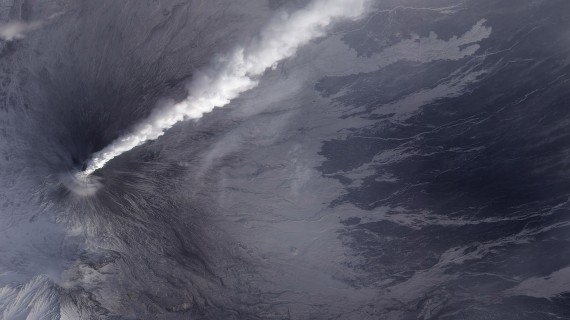 The island of El Hierro, in the Canary Islands (Spain), became the center of attention in 2011, due to the volcanic eruption that began in its active underwater volcano, which caused a series of earthquakes and expelled magmatic material. It is one of the few active volcanoes in Spain.

The most intense earthquake was recorded in October of that same year. The persistence of a degassing process causes the continuous deterioration of the underwater ecosystem. The following video explains how it occurred and what consequences the eruption of the underwater volcano of 2011 brought:

Bárcena volcano is one of the ten active volcanoes of Mexico nowadays. Located in the Revillagigedo Archipelago (350 km south of Baja California Sur), the last eruption of this Mexican volcano took place between 1952 and 1953.

Bárcena volcano is the main tourist attraction of the Saint Benedict Island, where you can find several lava domes at the north end, while Bárcena is at the south end of the island.

The last eruption began at 7:45 in the morning of August 1, 1952 with the sudden emission of a white fumarole that, minutes later, acquired an almost black dark gray color. This is how the volcano began to expel volcanic bombs in an eruption described by many as violent.

The Sakurajima volcano is located in Japan, specifically on the island of Kyushu (Kagoshima Prefecture). Before the great eruption of 1914, this volcano was an island, but the enormous amount of lava that it expelled on this occasion solidified, which caused it to join the Ōsumi peninsula. 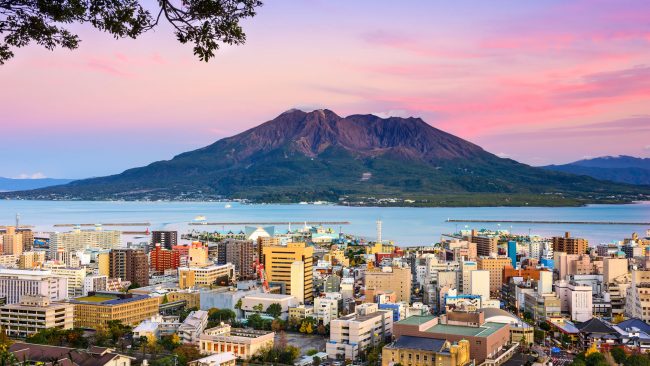 Since 1955, Sakurajima continues today to be one of the most active volcanoes on Earth. In fact, the large amount of magma The accumulation of its interior today suggests that a new eruption will arrive in approximately 25 years, according to a team of researchers from several international universities.

The volcano forms a mountain that is divided into three peaks: the Pico del Norte, the Pico Central and the Pico del Sur. It is the latter that is currently active, although the highest is that of the North, with a height of 1,117 m above sea level.

Despite being considered a dangerous area, the Sakurajima, located within the Kirishima-Yaku National Park, is one of the most tourist areas in the area. There you can find all kinds of resources: from hot sources to hydrotherapy.

This article has been shared 771 times.