The meter from Athens It is relatively recent, it was inaugurated in 2001. It is quite peculiar given that all the stations exhibit pieces that they found when doing the excavations for the system. The Greeks are very proud of him, so they have measures such as not eating or drinking either at the stations or on the train. The meter consists of three lines:

This is the subway map: 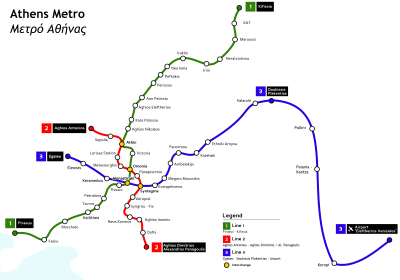 The standard metro fare is one euro between all stations except the Airport. A 24-hour ticket costs 3 euros. This is valid for all public transport in the city. Tickets must be issued only once, at the beginning of the first trip. The fare to the Airport is 6 euros, and 10 the return. It must be used in a maximum of 48 hours.