Tacos are a popular food originally from Mexico that consists of a corn tortilla or wheat flour stuffed with different ingredients. Its history dates back to pre-Columbian times, when they were prepared on hot stones with dog or turkey meat, also known as turkey. In this article, we explain how to prepare the original Mexican tacos and explain what types there are.

In most supermarkets it is easy to find packages of ready-made tortillas. However, if you want to make them yourself, it is quite a task simple and fast. The ingredients that are needed are these:

The water has to be somewhat hot. With these quantities, you can make approximately fifteen tortillas or pancakes. On the other hand, to prepare the classic filling of Mexican tacos you need the following: 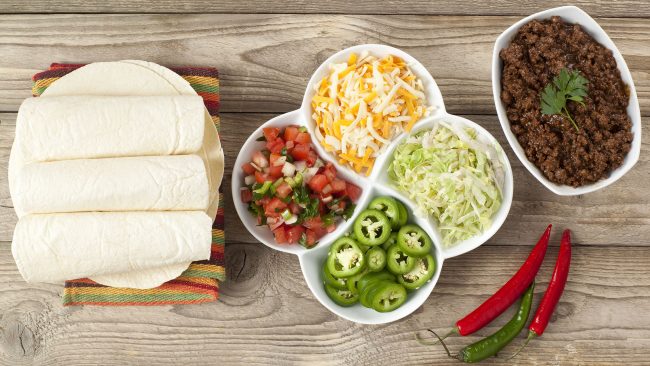 First, to prepare the tortillas, you have to add salt to the hot water and dissolve it. Then, put the cornmeal in a bowl and pour and mix the water until a smooth dough.

With this dough balls are made, which are extended and flattened with the help of a roller. In a pan with a little hot oil, simmer until both sides are golden brown. 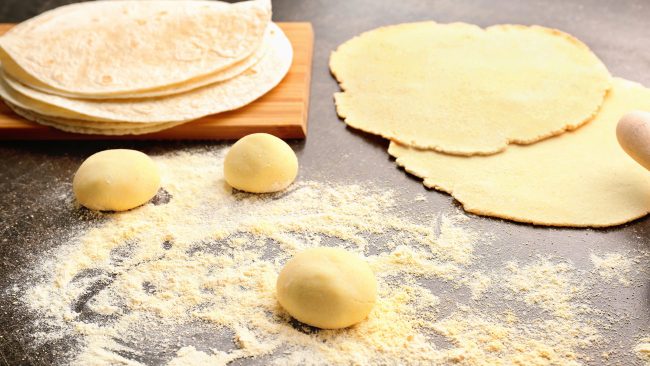 Also to prepare the fillingFirst, the meat is seasoned and fried with garlic and oil. This is added to the tortilla together with the chopped lettuce and onion, the tomato cut into tacos and the grated cheese. Each diner can serve red or green sauce to his taste, depending on whether he wants the taco more or less spicy.

There are hundreds of types of tacos that we can find throughout Mexico, because in each area of ​​the country different varieties have been developed, characterized by both the ingredients of the filling and the method of preparation. These are some of the most typical:

Battleships
They were created in Cuernavaca, Morelos. They are prepared with double tortillas and filled with red rice, stuffed chili, steak and Milanese or beef jerky.
Pastor
It is one of the most traditional recipes. The meat is marinated pork and is preserved in a roll called top. This is accompanied by achiote (a spice), orange, vinegar and pepper. It is originally from Mexico D.F.
Drowned
It is called that because the taco has a lot of sauce, which can be beans, tomatoes, etc.

Arabs
They are typical of Puebla. They have Arab influence because the tortilla is pita bread. The filling is pork, onion, thyme, lemon and a vinegar sauce.
Of wire
They carry beef and chili peppers, ingredients on which melted cheese is put.
Of buches
The meat used is from the beef gut, which is fried. They are popular in northwestern Mexico.
Basket
the tortillas are small, steamed in a pot called steamer. Therefore, it is said that they are sweaty. They are typical of the north.

Stew
Inside they carry typical Mexican dishes such as pork tenderloin or cheese-filled chiles. You can buy them at street stalls in Mexico City.
From jamaica
This is a vegan recipe, because it has no meat, but cooked jamaica flower (a plant), cooked nopales (cactus), avocado, onion and garlic.
From nana
The meat is from the uterus or the pig's womb, which is mixed with guts.
Of nopales
cooked nopal is incorporated into the filling, which is a type of cactus.
Of fish
It is typical of Baja California and Baja California Sur. Bring breaded and fried fish accompanied by pico de gallo (a salad), green sauce, mayonnaise and cabbage.
Of Suadero
on two fried tortillas it is soft (beef), coriander, onion, lemon, salt and sauce.
Gold
In a yellow corn tortilla, shredded meat is rolled and fried. The result is a crispy taco in the form of a flute. 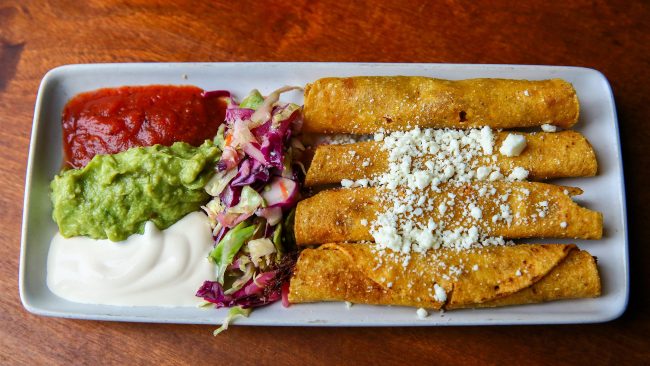 Enhojado
Its origin is in León, Guanajuato. They consist of potatoes, pork rinds (pork-based food) and beans. This is wrapped with an omelet and steamed.
Poisoned
This typical Zacatecas taco consists of a large golden corn tortilla in oil and stuffed with refried beans with cheese.
Governor
The ingredient that differentiates this variety is shrimp, a type of seafood of small size.
Ranchers
the tortilla is filled with tilapia (a fish), chili or habanero pepper, avocado and green cabbage.
Villamelón
It is made mainly in Mexico D.F. It has beef jerky and pork rinds.

The price of these tacos varies, as the value of some ingredients is greater than another. In addition, it also depends on whether we prepare it ourselves or order it in a restaurant.