The Plaza de Las Platerías (in Galician, Praza das Praterías) is located in the monumental area of ​​Santiago de Compostela. It is the smallest of the four squares that surround the Cathedral. The others are those of Obradoiro, Quintana and Immaculate or Azabachería. 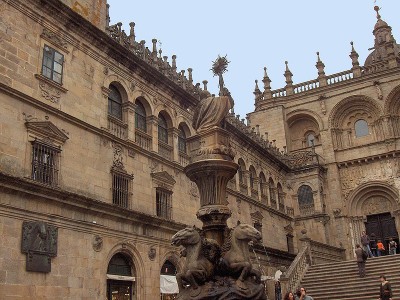 The name of the square is given by the workshops of silversmiths and goldsmiths who occupied the cloister spaces in the Middle Ages. 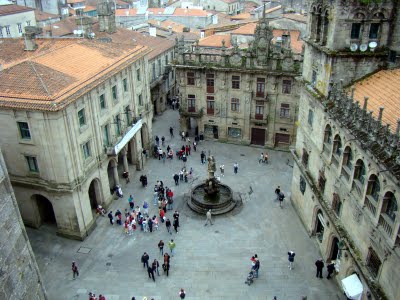 The square is structured in two heights joined by a large staircase and with the Fountain of the Horses in the center, an 1825 work by J. Pernas. Being one of the most famous fountains in the city. Compostelan Baroque style, is formed by four horses that throw water through their mouths, above which stands a pedestal with the Maritime Ark topped by a female figure with the arm raised holding the star of Compostela. 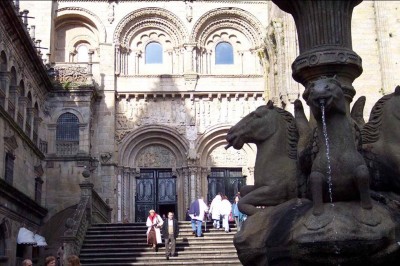 It is delimited by the south facade of the Cathedral, where we can appreciate the only Romanesque door that is preserved, next to the Clock Tower with the Berenguela, the bell that marks the hours in the city. On the other front, the Casa del Cabildo, a beautiful Baroque style building from 1758, and the Lantern that guides pilgrims to the Cathedral. 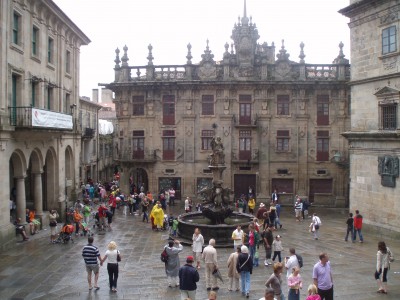