Portugal is part of the Iberian Peninsula and, therefore, is a European country. It is divided into 18 districts and also has two autonomous archipelagos: Madeira and Azores. In total, the area it occupies reaches 92 391 km² and its coastline measures 1,793 km in length.

The political division of Portugal consists of a total of 18 districts, Lisbon being the one with the largest territorial area and, consequently, the largest number of inhabitants.

In the sections shown below, we have divided the political map of Portugal into three parts: north zone, central zone and south zone. This way it will be easier to visualize each district, as well as its cities.

According to the map shown below, the northern part of Portugal covers a total of nine districts: Viana do Castelo, Braga, Vila Real, Bragança (Braganza), Porto (Porto), Aveiro, Viseu Guarda and Coimbra.

Of all of them, the city with the highest number of inhabitants is Porto (Porto in Portuguese), while the largest in terms of territorial extension is Braganza (Bragança in Portuguese).

In the following table, we show you the territorial extension of each one along with the number of inhabitants and the corresponding cities: 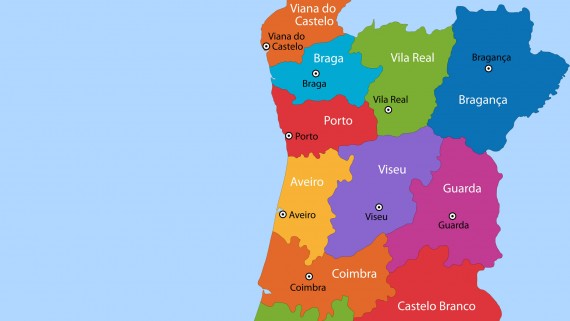 On the map, you can see the area that corresponds to the center of Portugal in administrative terms. Thus, we include here the following six districts: Castelo Branco, Leiria, Santarém, Portalegre, Lisbon and Évora.

Lisbon is the capital of Portugal and the most tourist of all, as well as the one with the greatest number of inhabitants, as can be seen in the figures shown in the following table: 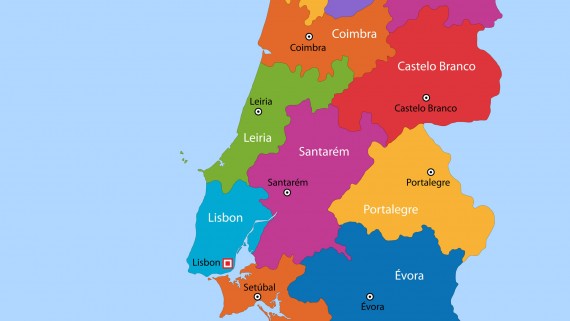 Finally, in the southern part of Portugal we include three districts: Setúbal, Beja and Faro. The first, Setúbal, is the one with the highest population density rate, although, however, it is not the most extensive.

This data can be seen in detail in the following table: 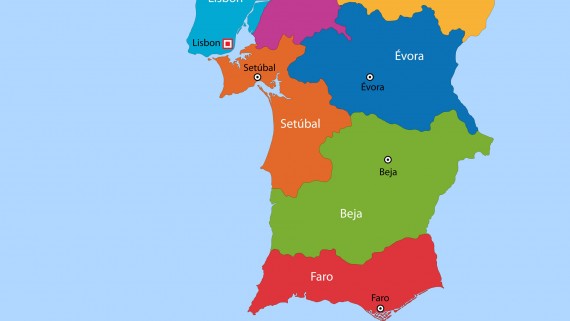 Located in southwestern Europe, the continental territory of Portugal covers 91,951 km², of which a large part corresponds to the Atlantic coast of the Iberian Peninsula and, the rest, belongs to the two autonomous archipelagos belonging to the Republic of Portugal: Madeira and Azores (440 km² of maritime zone in total).

Since Portugal is located in the Iberian Peninsula, the only border country is Spain, with which it limits east and north. To the south and west, it borders the Atlantic Ocean on its 1,783 km of coastline.

As can be seen on the map, the northern territory is especially mountainous in the interior areas, which is very favorable for the development of the primary sector (agriculture). This type of mountainous landscape is known as planaltos.

As for the southern zone (up to Algarve), the terrain is formed by plains interspersed with a low-rise mountain range. In short, the highest point is the Peak Mountain (Montanha do Pico, Ponta do Pico or Serra do Pico), located in Azores, whose summit is at an altitude of 2,351 m and is, in fact, an active volcano that became active for the last time in the 18th century.

Other islands of the Azores have also had recent volcanic activity, such as the Capelinhos volcano, located on the island of Faial, which erupted for the last time in 1957.

Instead, the Madeira archipelago is located on the African plate, which makes it the most stable region in Portugal in terms of the risk of earthquakes. The last volcanic eruption in Madeira took place 6,000 years ago.

As for the coast of Portugal, this includes, apart from the 1,230 km of continental territory, the 667 km of the Azores and the 250 km of Madeira, the Wild Islands (between the Canary Islands and Madeira), the Desertas Islands (located southeast of Madeira) and the island of Porto Santo (northeast of Madeira).

Portuguese beaches are characterized by their wide variety of beaches and cliffs. 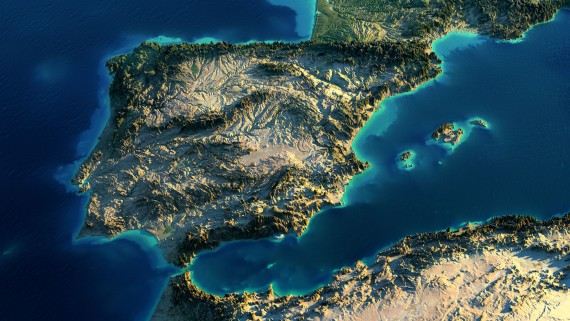 As for the SCUT motorways and sections, they work with the gantry / arch system, that is, electronic toll, so only electronic payment is allowed. This means that the toll collection is automatic, that is, the system detects each car when it circulates under the toll gates.

The foreign Circulating through these routes have two electronic payment options: on the one hand, pay with an electronic device or adhere to the payment methods for registration recognition.

In the maps shown in the following sections you can get an idea of ​​which are the main highways in Portugal, as well as which are toll roads, which are free and which continue to have the conventional toll system. 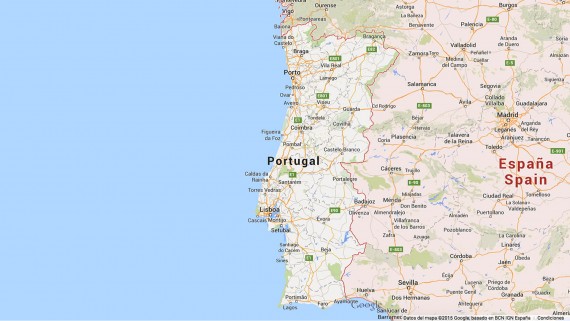 The following list shows the toll roads that pass through the northern part of Portugal:

And the following list lists the SCUT motorways and sections (free) from the north of the country:

Finally, these are the roads of northern Portugal that maintain the system of conventional toll: 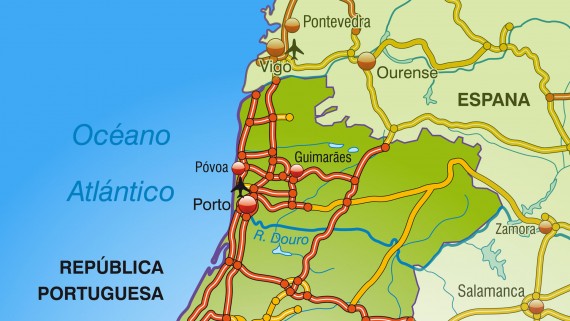 Instead, the following roads are from free circulation or SCUT:

Finally, the highway network that maintains the system of toll road Portugal's largest is in this area, since it is where Lisbon, the capital of the country is located and, therefore, there are more traditional access roads. These are the roads with conventional toll system in the center of Portugal: 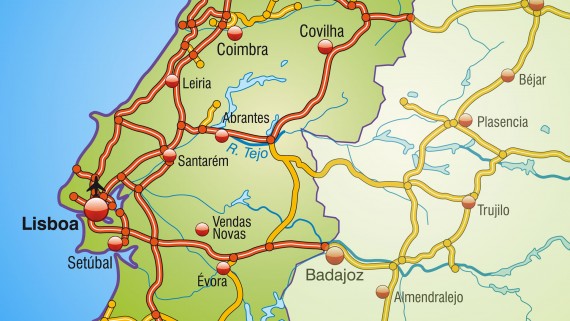 The southern part of Portugal, covering only three districts (Setúbal, Beja and Faro) as mentioned above, only two main highways are located, each of them of one type.

On the one hand, the section Infante de Sagres (Autostrada do Algarve): A22 Monte Gordo-Lagos, which is tele-toll; and, on the other hand, the road A22 Spain-Exit N125 / Montegordo, whose circulation is free or SCUT type (sem custo para or user).

As for the reels with conventional toll system, in the south zone the user can circulate through the A2 in its section Albufeira-Lisboa. 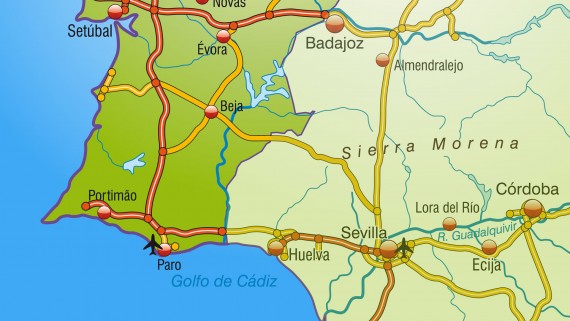 He Tagus river (Yew in Portuguese) is the longest river in the entire Iberian Peninsula. Born in the mountains of Albarracín, Teruel (autonomous community of Aragon, Spain), specifically in the so-called Universal Mountains, and travels Spain westbound to Lisbon, where it finally flows into the Atlantic Ocean after traveling 1,007 km. The Tagus River divides Portugal into two halves.

Other equally important rivers that are born in Spain are the Duero, the Guadiana and the My no (Douro, Guadiana and Minho respectively in Portuguese language).

The Duero River is born in Fuentes del Duero, Duruelo de la Sierra, Soria, and flows into Porto. The Guadiana, meanwhile, travels the Submeseta Sur to Badajoz (Extremadura, Spain), where it takes a southern direction until it flows into the Atlantic Ocean.

Finally, the Miño river runs almost entirely through Galicia and forms a natural border between Spain and Portugal in Pontevedra to its mouth once again in the Atlantic.

However, Portugal also has a network of rivers that have their entire course in Portuguese territory, such as the Vouga, the Mondego, the Sado and the Cavado, the latter with birth in the Sierra de Larouco and that runs 135 km to its mouth in Esposende after passing through Braga and Barcelos.

It is one of the largest rivers in Portugal, so the water resources it stores correspond to almost 30% of the country's total.

As for the lakes from Portugal, it is worth mentioning that there are no large lakes in Portuguese territory. However, there are some of glacial origin in the interior of the country, such as the Comprida and the Escura, the latter located in the Sierra de la Estrela, and others belonging to the marshes of Albufeira, Aveiro, Braças, Óbidos and Candle. 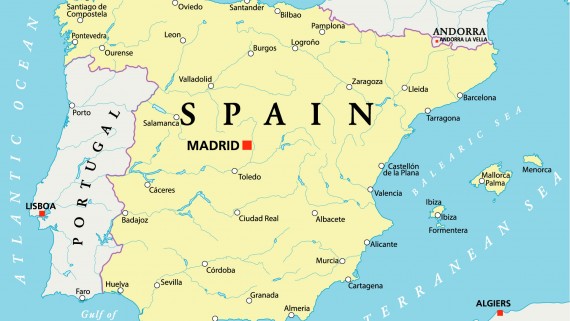 In addition to the continental territory located in the Iberian Peninsula, Portugal has two autonomous archipelagos. Thus, on the one hand is Madeira, whose location is located in Africa; on the other hand, the Azores, which are in the northern hemisphere of the Atlantic Ocean.

In the two sections shown below we present both archipelagos along with a map of each.

The Autonomous Region of the Azores or, simply, Azores is an autonomous archipelago belonging to Portugal that is formed by a total of nine islands located in the middle of the Atlantic Ocean about 1,400 km from the Lisbon coast, of which the Island of São Miguel It is the most extensive, with its 759 km².

The Azores are part of Macaronesia, collective term that refers to the five archipelagos found in the North Atlantic (Azores, Canary Islands, Cape Verde, Wild Islands and Madeira). Like Madeira, they are considered an outermost region of the European Union (EU).

The total area occupied by the nine islands that form the Azores is 2,333 km².

Actually, these islands are from volcanic origin, a fact that can be seen in the different volcanic cones and craters found there, such as the Pico volcano, located on the homonymous island, which also constitutes the highest peak in Portugal.

It is considered an active volcano, since its last eruption took place in 1957 on the island of Faial.

The nine islands that form the Azores are those mentioned in the following table next to their corresponding municipalities: 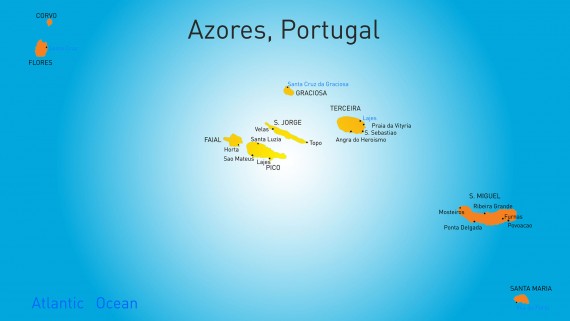 The Madeira Autonomous Region, better known as Madeira and adapted to Spanish as WoodAlthough this term is currently in disuse, it is an autonomous archipelago of Portugal that constitutes an outermost region of the EU. 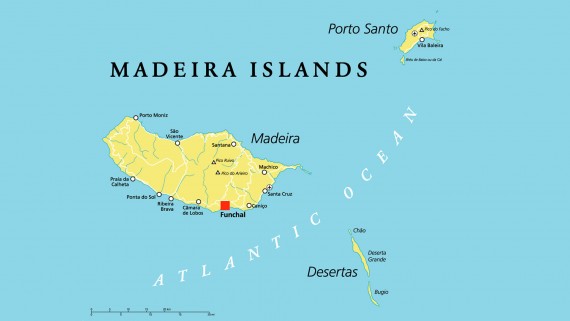 Madeira is popularly known as The Pearl of the Atlantic, since it is a leafy island formed by volcanic eruptions that took place thousands of years ago.

This mountainous territory offers multiple options for tourists, such as hiking through Pico Ruivo, the highest peak on the island with its 1,800 m height. Its capital, Funchal, offers tourist attractions such as the Sé Cathedral of the 15th century and the Museum of Quinta das Cruzes, among others.