One of the biggest attractions that Tokyo presents is the artificial island of Odaiba, which works as the area with more futuristic buildings in the Japanese capital. In its streets we find the main shopping centers, business offices and media of the city. 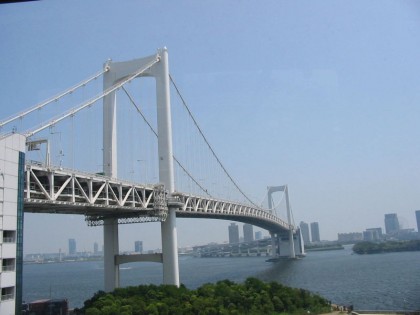 To access to Odaiba we must cross one of the most attractive bridges in the world: the Rainbow bridge. This suspension bridge extends from the island to the north end of Tokyo, in the Port of Shibaura.

The Rainbow Bridge has been operating since 1993, and it not only serves for the transit of cars and pedestrians, but also has tracks where trains run along the Metropolitan Express line. Due to its more than 570 meters of extension, it has the 59th position in the list of the longest bridges in the world.

This bridge is known under the name of Rainbow bridge (Rainbow Bridge) because during the night it is illuminated with hundreds of colored lights that are located in its structure, forming a rainbow. It should be noted that the lighting of this bridge is ecological, since it is powered by solar panels that are recharged throughout the day. 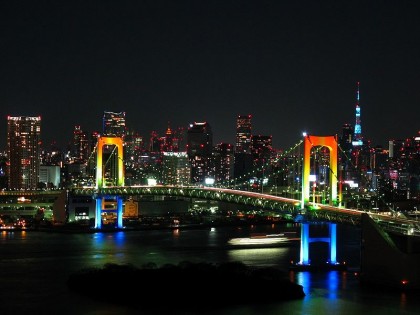 To appreciate the beauty of this bridge, especially at night when you find the lights on, it is best to locate us in one of the commercial centers of the Odaiba Island, as they provide an ideal panoramic view, ideal for taking the best photographs.