The San Martin Plaza It is one of the oldest and most beautiful Buenos Aires. It is in the El Retiro Neighborhood. In it we can find the birth of the Florida pedestrian street and a series of famous buildings of the city. 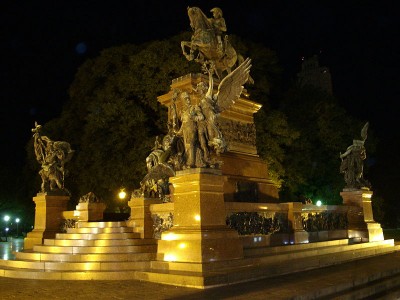 It offers a beautiful walk that we can take in two hours and from which we can obtain a good collection of photographs. It has a ravine from which we will have a view of the Port of Buenos Aires and a flat area populated by large trees that shade the paths populated by banks where you can see the Buenos Aires resting or making their lunch in the middle of their work day. Here it was the landscape designer Carlos Thays who took care of the design and planted regional species among which we will see many sculptures.

The square is chaired by a statue of General San Martín, who will form his Horse Grenadier Army here with which he will liberate America. It was settlement of the only bullring that worked in the city, in 1801.

After the War for the Falkland Islands of 1982, it was erected in the area of ​​Avenida Libertador, the Monument to the Fallen in Malvinas, with the names of the almost 700 soldiers engraved on black marble plates. Faced, the Argentine Air Force Square, with the Torre de los Ingleses, currently Monumental Tower, small replica of the Big Ben gift from the United Kingdom. 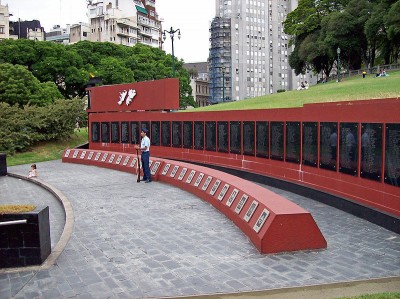 Surrounding the square, the mansions of important families in the country. The San Martin Palace, which was the residence of the Anchorena family, today is headquarters of the Ministry of Foreign Affairs and Worship. In front you can see the Peace Palace, Headquarters of the Military Circle which houses the National Weapons Museum, former residence of José C. Paz. A few steps from there, the residence of the Haedo family, today National Parks Administration.

On the other side of the square we find the Kavanagh building, the first Buenos Aires housing tower, which in 1935 was the tallest building in the world made in concrete. Next to him Marriot Plaza Hotel, the most luxurious and traditional accommodation in Buenos Aires, since 1909.

Arriving is not complicated because in the corner of Avenida Libertador there is a transport knot It brings together railroads, dozens of bus lines and the subway. 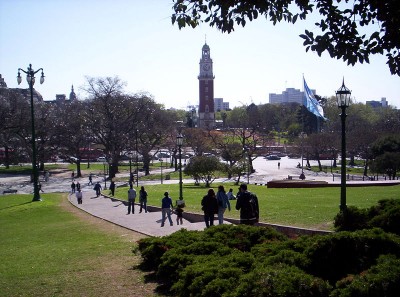