In the Campo dei Miracoli, lost between alleys and canals east of the sestiere of Cannaregio, outside the medieval walls of Venice, we found the Church of Santa Maria dei Miracoli (Saint Mary of the Miracles). It is the favorite church of the Venetians to marry.

This beautiful temple, an example of the Venetian revival, was built at the end of the 15th century, and houses the remains of Cardinal Girolamo Castaldi, who financed the work. This design by Pietro Lombardo defines, for many, the style of Venetian Quattrocento.

It stands out especially for the curious shape of its facade of polychrome marbles, which they say are the leftovers of the construction of the Basilica of San Marco. Its semicircular upper part has a central rosette surrounded by three smaller ones and has a large number of elegant bas-reliefs. Its shape is compared to that of a jeweler. 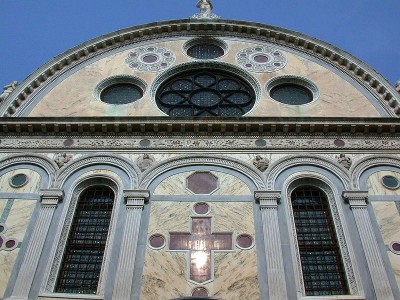 Inside, the colorful marbles give a peculiar color effect. A large staircase leads to the Madonna cabbage Bambino, by Nocolò di Pietro, who presides over the altar. The roof, with a barrel vault, is covered with coffered ceilings decorated with the faces of the prophets. The pilasters and the skirting of the ship present curious bas-reliefs of mermaids and newts. 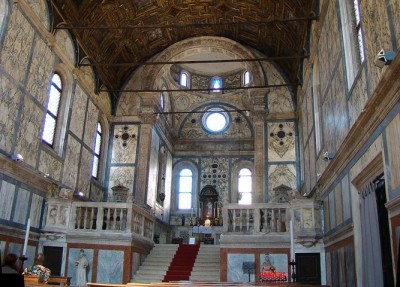 The church can be visited from Monday to Saturday between 10 am and 6 pm, and Sundays from 1 pm to 5 pm. Admission is € 2.