The Basilica of Santa María Gloriosa de los Frailes is in the Campo dei Frari, of the sestiere of San Polo, west of Grand Canal of Venice. Its construction took a hundred years, and was consecrated in the fifteenth century to the Assumption of the Virgin. 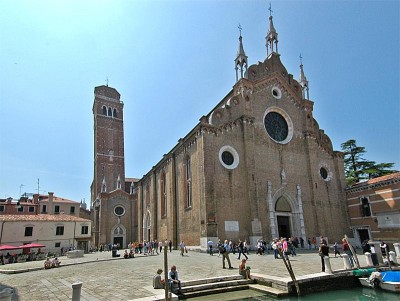 Better known as “I Frari” (the friars), by the brotherhood of Franciscans who lived in the Convent to which it is attached, which after the Napoleonic invasion became State Archive. 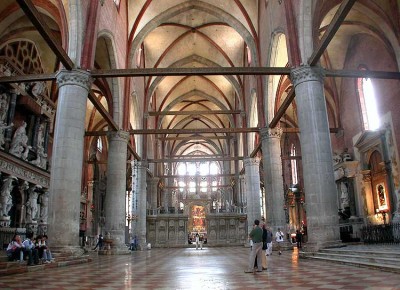 It has a Latin cross plan and clearly represents the style Franciscan Gothic, of pure lines. Its exterior is very stripped and simple, contrary to the monumentality of its interior. It has three naves with ogival arches and the choir in the nave. It measures 102 meters by 48 wide, with a height of 28 meters, which makes it one of the largest churches in Venice. his Campanile Romanesque style, second in height after San Marco, with 80 meters. 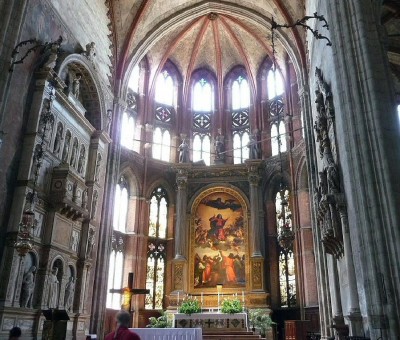 She treasures many valuable works by famous artists. “The assumption” of Titian presides over High altar. The Tiziano and Canovas mausoleums They are of great interest, especially the second one, to whom his disciples built a pyramid similar to one of his designs. The altarpieces of Chorus they are works of Bellini and Vivarini. 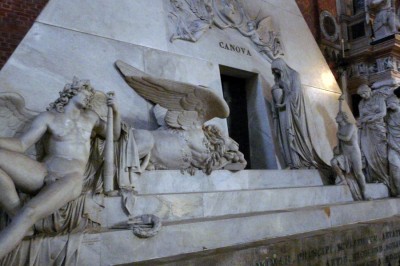 To visit the temple, the Schedule from Monday to Saturday they go from 9 a.m. to 6 p.m., and Sundays and holidays from 1 p.m. to 6 p.m. Entrance is suspended during worship and celebrations. The entry It costs € 3 and is free with the card Chorus Pass.