The gay pride, LGBT, rainbow or freedom flag is the main gay badge today. Its meaning is related to diversity and respect for gay rights. In what follows we explain why it has so many colors and what are its origins.

Why do you have the colors of the rainbow?

Originally, the LGBT pride flag was composed of eight stripes, among which were pink and turquoise. While the former symbolized sexuality, turquoise was related to magic and art.

Today, it is still used as a symbol of gay and lesbian pride. Its meaning is associated with each of the colors that compose it, which reproduce in the same order as the colors of the rainbow:

The fact that it has so many colors is explained because the goal is to represent diversity within the LGBT community, which includes lesbians, gays, bisexuals and transsexuals. It is an international symbol and a sign of tolerance and respect towards these people. 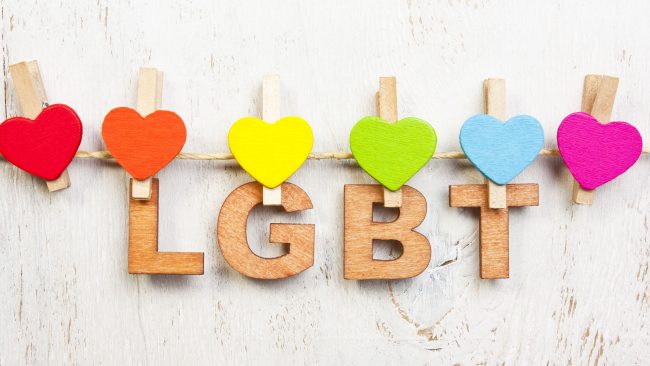 It mimics the rainbow's color gamut as a way of vindicating gay rights and gender diversity. It is similar to other flags, such as that of cooperativism, in which seven colors appear representing universal peace.

It is also distinguished from the flag of peace because the colors appear inverted. Thus, while in the gay emblem the first band is red, in that of peace the first color is purple. This was done precisely to prevent them from being confused.

It also bears similarity to the Inca or Cuzco flagemblem of Tahuantinsuyo, that is, the Inca Empire. Both differ because in that of the Incas seven colors appear instead of six. They symbolize the seven chakras or energy centers of the human body. 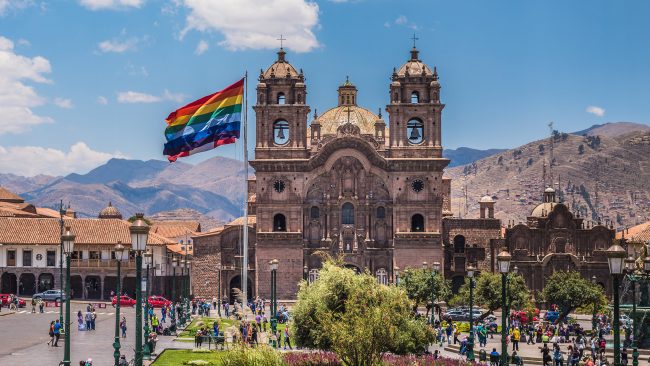 In addition to the rainbow flag, there are other alternative symbols and emblems to designate each of the groups that make up the entire LGBT community. There are to represent transsexuals, bisexuals, lesbians, queergender…

He lesbian and feminist movement It is represented with a double-blade ax called labrys. It was the symbol of the ancient Minoan civilization and is represented in various legends of Ancient Greece, including those related to the goddesses Demeter and Artemis. 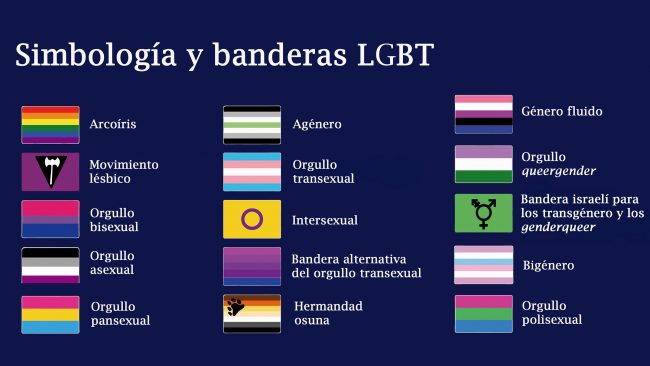 The brotherhood osuna or bear brotherhood It refers to the group of gay men called "bears", characterized by their robust physique and abundant body and facial hair. Bear gays flee from the stereotype of effeminate homosexual.

Transgender people (transvestites and transsexuals) are represented by a modification of the typical symbol of the sexes, so that both male and female concepts are incorporated into the same image.

The flag of transgender pride It consists of five horizontal bands in light blue, pink and white. According to the author, Monica Helms, these are the traditional colors to dress children mixed with white, representing those in transition. 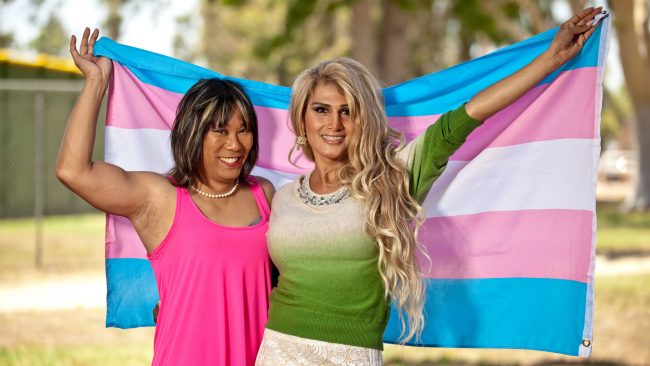 The intersexuality, a biological phenomenon in which the individual has characteristics of men and women, also has its own symbol. Previously the term "hermaphrodite" was used, but it is being replaced because it is confusing and insensitive to the members of this group.

What is your story?

It was created by Gilbert Baker in 1978 and included two more stripes: one pink and one turquoise. Although it became famous as an international symbol of unity among people, little by little its colors became related to gay pride. Its author died on March 30, 2017 in New York.

Before it began to be used, the pink triangle symbol was simply used, but it fell into disuse because of its relationship with Nazism, since it was sewn on the clothes of homosexuals during this time to differentiate them from heterosexuals.

Baker thought of eight colored lines considering the design of the symbol that represented several social organizations in San Francisco, California. Its use in the gay pride parades began to become popular after the murder of George Moscone and Harvey Milk in 1978, both gay rights activists. 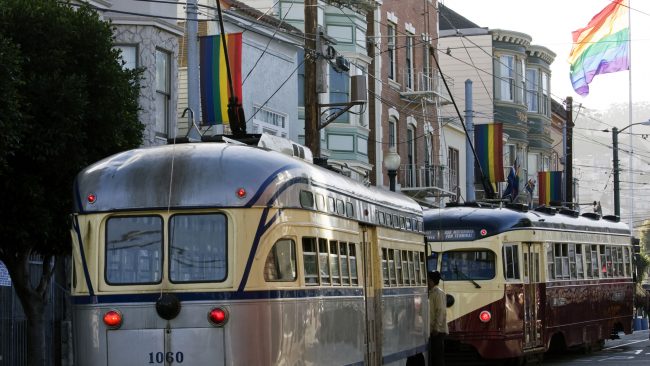 It has gone through several stages since 1978 and its design has been modified several times to be as it is now, that is, with six horizontal stripes representing the rainbow's color range. Until 1978, it was composed of seven stripes, until the turquoise color of it was removed.

Although it was invented in the United States, today it is used worldwide to represent the LGBT collective. Currently, the largest gay flag in the world flies in Nelson Mandela Bay in Port Elizabeth (South Africa), 12 meters long and 8 meters high.

Recently, we were able to see her at half-mast or with the symbol of mourning in commemoration of the murdered gays in Orlando (Florida) in 2016. The massacre took place in one of the most popular gay clubs in the area and culminated in the death of 50 people. 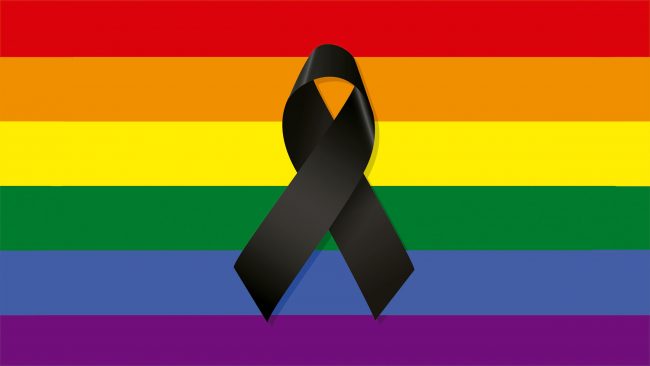 Social networks as popular as Facebook, Twitter or Tumblr they have built up the diffusion of rainbow colors during the campaigns for the celebration of the International LGBT Pride Day, which takes place every June 28. Google also used it as a doodle in 2014 to commemorate the Sochi Olympics, Russia.

At Eurovision festival, the LGBT movement has been noted in recent years, especially by the Russian audience. Also the transgender collective, thanks to Conchita Wurst, winner of the festival representing Austria in 2014.

It is even the official flag of the Gay and Lesbian Kingdom of the Coral Sea Islands, a micronation located in Australia that, despite not being recognized by any country, declared itself a State in 2004 to protest against the prohibition of gay marriage in Australia. 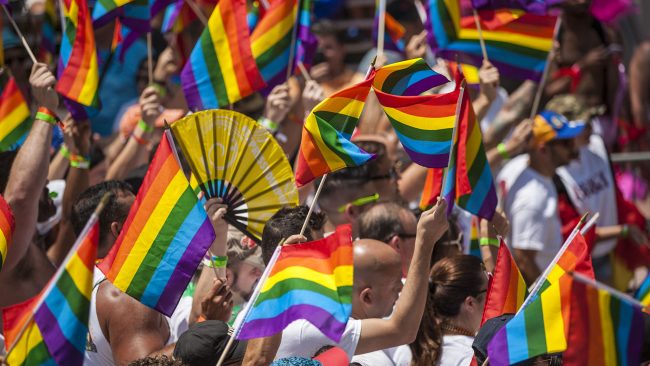 Its popularity is such that there are those who buy or make it at home for use in varied contexts. There are also those who wear multicolored clothes, paint their nails or even dye their hair with rainbow colors to participate in gay pride marches.

The homosexual flag has been used in recent decades to illuminate with some colors some of the most important buildings or monuments of major world capitals. It is usually done to celebrate the gay pride party to claim acceptance by this community.

The Brandenburg Gate It is one of the world monuments that have been illuminated with the colors of the rainbow during the march of pride. It should be remembered that Germany is one of the most gay-friendly countries in the world, where gay pride is celebrated in style, especially in Berlin.

He City of Madrid It's a good example. There, every year a great banner unfolds that arrives from the main balcony to the entrance door. It is the meeting point of the thousands of attendees who congregate there year after year. 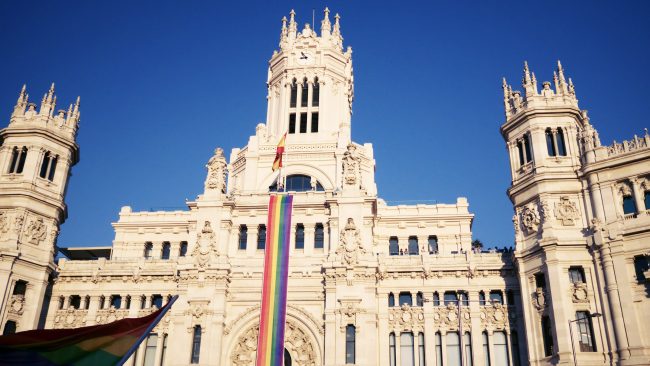 Another of the most important cities for the LGBT community, both for living and for sightseeing, is Tel Aviv (Israel). The city has consolidated in recent years as one of the main world capitals for its massive Gay Pride march, in which 200,000 people gather every year.

Currently, Israel has become a leading country in LGBT rights. In fact, except for Jordan, Israel is the only place gay-friendly from the Middle East, with wide acceptance by society and the Israeli government towards the gay community.

He San Francisco City Hall, probably the most important gay destination in the world, has also been illuminated with the colors of the rainbow flag during the celebration of the festival of pride, which today has a duration of two days (Saturday and Sunday). 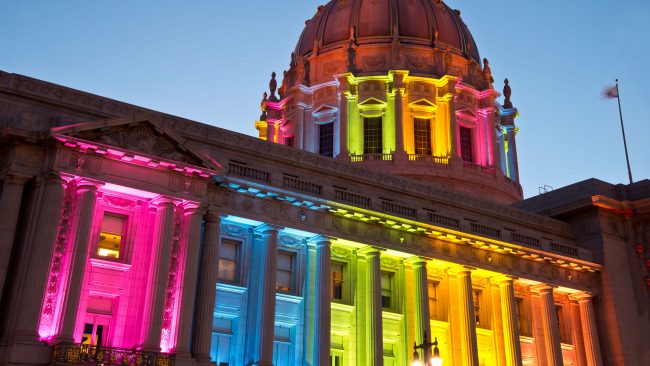 The American Embassy of Madrid is another of the government buildings where you can see the colors of the rainbow as a way to commemorate the approval of the law of gay marriage in Spain.

Another building where you can see the gay flag in motion is the mayor's office of Bucaramanga, a municipality located in Colombia. In recent years, Colombia has become another of the booming gay destinations within South America, with numerous options for tourists in terms of fun and relaxation.

The Presidential House of Costa Rica, headquarters of the Costa Rican government, is another of the buildings where the gay flag has been raised to celebrate World Homophobia Day in the country, one of the most permissive and tolerant of Central America.

This article has been shared 72 times.

Finally, we have selected the previous and next article of the block "Gay tourism"so you can continue reading: