The New Square of Granada, contrary to what its name suggests, it is the oldest in the city, from the first of the Christian era at the beginning of the 16th century. It is located in the modern downtown area, it was a consequence of the widening of the city

Several bridges crossed the Darro River, but since the conquest of Pomegranate, successively interventions were carried out to bury it giving rise to this space that the population welcomed, quickly taking possession of it. There are documents that show that once there bulls were run and tournaments of different kinds and even public executions were held. 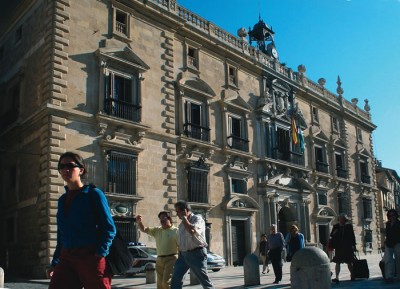 In its surroundings we find the Royal Chancery where the Provincial Court operates today and behind it the 17th century prison that was operational until the end of the 19th century. As an extension, the Santa Ana Squarewhere is the Santa Ana Church and the Fountain of the Bull, forming a unit space.

On the Cuesta de Gomérez we can go up to the Alhambra, and through the alleys that surround it until the Albaicin. The Plaza Nueva is very close to the economic and business center of the city.

At night the space is won by the terraces of taverns and bars that give it a special air between bohemian and cosmopolitan, the favorite meeting place of the people of Malaga who have transformed it into the forum of the city.