Is the rofficial residence of the King, inhabited from Carlos III to Alfonso XIII, but the current monarch does not occupy it and It is intended for official acts. Every Wednesday there is celebrated the spectacular change of the Royal Guard. It occupies the space where the primitive Arab Alcazar was located.
Built with granite from the Sierra de Guadarrama for the facades and white limestone of Colmenar for auctions and ornamental details, this huge square-plan building surrounding a large central courtyard is crowned at the corners by four towers. It was inspired by the sketches Bernini made for the Louvre in Paris. 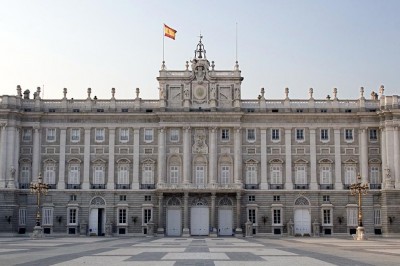 It is accessed through the wide Armory Squarewhere will we see the Royal Armory with one of the most important weapons museums in the world. The west facade facing the Campo del Moro, while east, look towards the Plaza de Oriente.
Inside we will see the monumental main staircase and a succession of rooms that we will highlight:
The Throne Hall, with a vault painted by Tiépolo, glassware of The farm and a rich set of bronze statues. 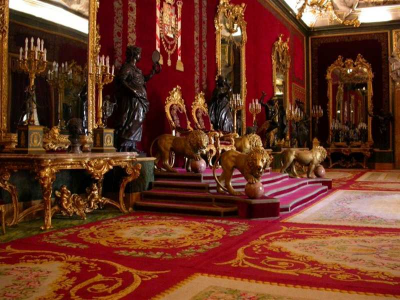 The Gasparini Hall with a spectacular marble floor and mirrors, chandeliers and rococo decorative elements, and an antechamber decorated with paintings of Goya.
The Hall of the Columns, where the Treaty of Accession of Spain to the European Union was signed, which sports walls with 17th-century tapestries and Roman busts and sculptures from the Old Alcazar. 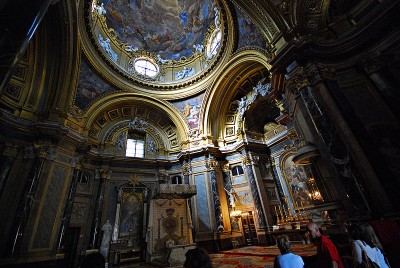 The Gala Dining It was made at the end of the 19th century, creating a room with 16th-century tapestries, 18th-century Chinese porcelain vases and paintings by Mengs, González Velázquez and Bayeu.

The Porcelain Hall, commissioned by Carlos III, whose ceilings are covered by porcelain plates of the Royal Good Retirement Factory.
The visit can be done freely or in guided groups.