The national anthem of the United States of America, whose name is The Star-Spangled Banner, is one of the most representative symbols of the country. In this article, we tell you about its history and its meaning. In addition, we show you some of the most prominent versions.

The American anthem is called The Star-Spangled Banner, which in Spanish translates as The Flag Full of Stars. The author of his letter was the lawyer Francis Scott Key, who wrote it in 1814.

This man went to Baltimore, Maryland, during the war of 1812, in which the United States fought against the United Kingdom. Here he was taken prisoner and locked in a ship, from where he witnessed the bombing by the British of Fort McHenry.

In the morning, at dawn, Francis Scott Key saw the United States flag wave in the fort, which moved him and inspired him to write the poem that would end up being the country's anthem. 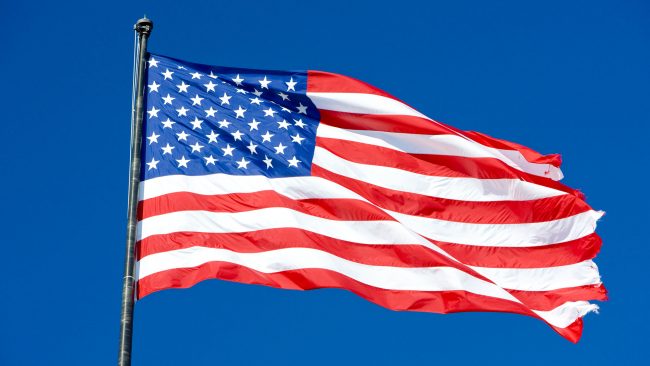 The tune of the song was not original, but that of an English folk song called To Anacreon in Heav’nby musician John Stafford Smith.

The official Spanish version is attributed to the Peruvian composer Clotilde Arias, who adapted the lyrics in 1945.

Over the years, the song became popular and was taken by the US military and navy. Later, on March 3, 1931, the United States Congress accepted it as an official anthem.

According to United States Law 36/301, during the anthem, people must remain standing and with their right hands on their chest. If you wear a hat or a hat, you have to take it off and take it with your left hand. Also, cars must stop and members of the Armed Forces and veterans can do the military greeting. 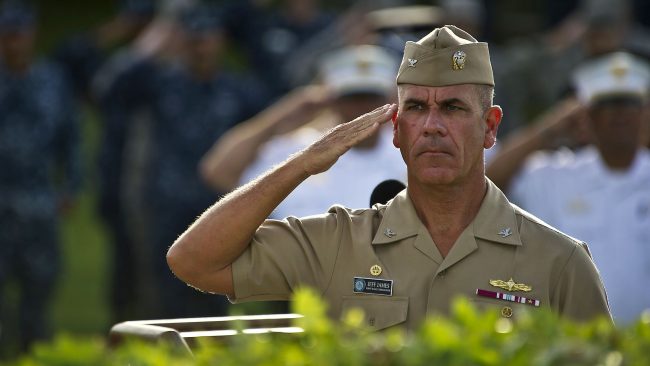 In English, this is the full letter of the official American anthem. Although it consists of four stanzas, usually only the first one is sung.

Oh, say can you see by the dawn’s early light
What so proudly we hailed at the twilight’s last gleaming?
Whose broad stripes and bright stars thru the perilous fight,
O’er the ramparts we watched were so gallantly streaming?
And the rockets ’red glare, the bombs bursting in air,
Gave proof through the night that our flag was still there.
Oh, say does that star-spangled banner yet wave
O’er the land of the free and the home of the brave?

On the shore, dimly seen through the mists of the deep,
Where the foe’s haughty host in dread silence reposes,
What is that which the breeze, o’er the towering steep,
As it fitfully blows, half conceals, half discloses?
Now it catches the gleam of the morning’s first beam,
In full glory reflected now shines in the stream:
‘Tis the star-spangled banner! Oh long may it wave
O’er the land of the free and the home of the brave.

And where is that band who so vauntingly swore
That the havoc of war and the battle’s confusion,
A home and a country should leave us no more!
Their blood has washed out their foul footsteps ’pollution.
No refuge could save the hireling and slave ’
From the terror of flight and the gloom of the grave:
And the star-spangled banner in triumph doth wave
O’er the land of the free and the home of the brave.

Oh! thus be it ever, when freemen shall stand
Between their loved home and the war’s desolation!
Blest with victory and peace, may the heav’n rescued land
Praise the Power that hath made and preserved us a nation.
Then conquer we must, when our cause it is just,
And this be our motto: «In God is our trust».
And the star-spangled banner in triumph shall wave
O’er the land of the free and the home of the brave.

In this video we can hear him played by singer Beyoncé during the presidential inauguration of Barack Obama in 2013:

Also, this is the first stanza of the official version in Spanish, a translation adapted by Clotilde Arias in which all the meaning of this important song is embodied:

Look! Can you see the subtle clear up what stood up when the sun went down?
And his stripes and stars in the rude fight, on strong bulwark bulwark undulated!
And the bomb when launching its reddish explosion, at night gave to see that there was the banner.
The happy tremola starry banner in the land of courage, in free country?

Banner It is a word used especially in Latin America to refer to the term flag.

However, there are more extended versions in which the lyrics have been translated in a more literal way. Next, you have the lyrics and a video in which you can listen to one of them:

Oh say you, you can see, with the first light of dawn,
What we proudly greet in the last flash of twilight,
Whose broad stripes and bright stars, through dark struggle,
We watched over the walls, waving gallantly.
And the red glow of rockets, bombs exploding in the air,
They gave proof at night that our flag was still there.
Oh say you, keep waving the starry flag
On the land of the free and the home of the brave.

On the shore, barely visible among the sea mist,
While the arrogant horde of the enemy in fearful silence rests
What is the breeze, on higher peaks,
Whimsically undulates, half hiding, half showing?
Now catch the glow of the first morning ray,
In full reflected glory now shines in the stream:
It is the starry flag! Oh long wave
On the land of the free and the home of the brave!

And where is that strip to which they so ostentatiously swore
That the ravages of war and the confusion of battle
A home and a country shouldn't leave us anymore?
His blood has cleared the contamination of his dirty steps.
No shelter could save mercenaries and slaves
From the terror of flight, or from the sadness of the grave:
And the starry flag, triumphant flies
On the land of the free and the home of the brave.

Oh, always be that way when free men get up
In the middle of their beloved homes and the desolation of war!
Blessed in victory and peace, may the earth rescued by heaven
Praise the power that has achieved and that has preserved us as a nation.
Then we must conquer when our cause is just
And this is our motto: "In God is our trust."
And the triumphant starry flag will fly
On the land of the free and the home of the brave!

Also, in 2006 a new adaptation was carried out by Latin American immigrants present in the country that receives the name of Our anthem.

The anthem of the United States is usually interpreted in important events of the country, among which the great sports competitions stand out. One of the most famous is the Super bowl, the final game of the American football league. Some of the most relevant interpreters in this event have been:

Other famous singers who have sung the anthem have once been Justin Bieber in a relevant boxing competition in Las Vegas, Marc Anthony at the 2012 Democratic National Convention, Demi Lovato in a baseball tournament and Ariana Grande in a league match American football

On the other hand, an instrumental version that went down in history was that of the rock singer Jimi Hendrix, who at the 1969 Woodstock music festival performed the anthem with the electric guitar as a protest against the Vietnam War:

This article has been shared 142 times.