The Almeria old railway station is in the Station Square. Built in the late 1800s, it is currently in disuse since the new operation began Intermodal Station from the city next to it.

It is not known for sure if its design is due to Gustave Eiffel or one of his disciples. But the truth is that this beautiful building is a sample of the architecture of iron and glass.

Its main facade consists of three bodies. The central body is built with iron and glass, creating a large window in the access, as a monumental portico. The lateral bodies are made of brick and stone covered with glazed ceramics. 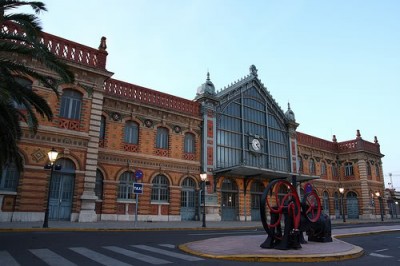 At present it cannot be visited inside, but a rehabilitation of the interior facilities is planned to adapt them as a polyfunctional cultural space.