Behind the trip to Sicily from one of our travelers, we bring you this Trapani guide which is part of the complete guide of Sicily. We hope it will be of great help on your next trips to this wonderful island.

Trapani It is worth visiting … And it must be seen, at least for two days. Stroll through its cobbled streets and stand in the old shops where they sell their artistic corals, following the traditional method. Also, acquire goldsmith products, of clear Spanish influence. 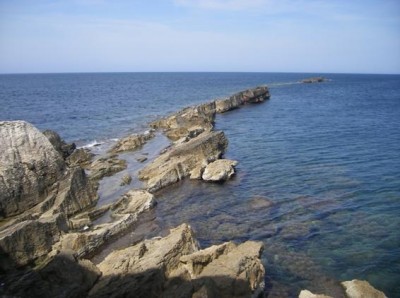 In the photo, the extreme tip of the city; between two seas, the Tyrrhenian and the Mediterranean, where Greeks, Arabs, Normans and Spaniards passed each leaving their contribution, their influence … Here, a mixture of Romanesque, Baroque, Liberty is conjugated … which materializes in its stately palaces, the facades of its churches and any other building in its old town. Another vestige of the Spanish presence: The processions of Good Friday, very similar, to those of any city in Spain.

Trapani has obtained a large part of its income from fishing (especially tuna) and coral extraction. The pieces made with coral from Trapani and San Vito lo Capo, were sold with great success in half the world (until the coral reefs were almost completely sheared), also from the export of salt (see photo of the salt flats) and of wine production. It is even claimed that a lot of Mafia money was laundered in Trapani. (I don't remember who told me this)

In Palermo, we will see more materialization of the Spanish presence. Here in Trapani, it is worth highlighting the Tower of Ligny, built by the Spaniards to stop the incursions of Turkish pirates. The Ligny Tower is the one that appears in the following photograph. 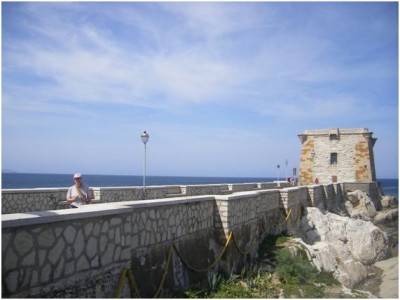 The Tower of Ligny (17th century) contains the Museum of the Sea and Prehistory with archaeological pieces of the area and medieval objects of all kinds, taken from ships that sank or ran aground in its vicinity. Highlighting: The San Francisco with Stigmata de Tiziano and La Piedad de Oderiso.

Currently, because it is under construction, it cannot be visited.

Say, we are in the final part, in the sharpest of the sickle that forms this piece of land that goes into the sea. Therefore, the Romans called it Drepanum (La Hoz).

It is a tower of the twelfth century; In the next photo, the top of the Tower. 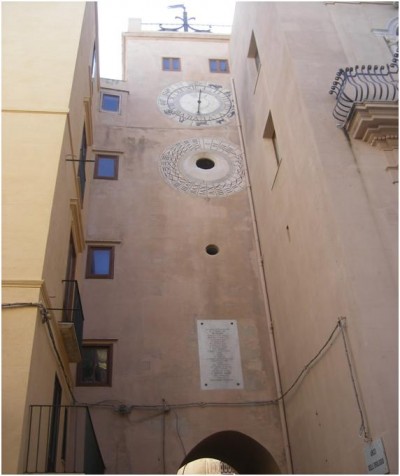 Next to this tower, is the Senatorial Palace, which appears in the photograph on the next page.

On the ground floor, an exhibition was held, advertised with the poster below. 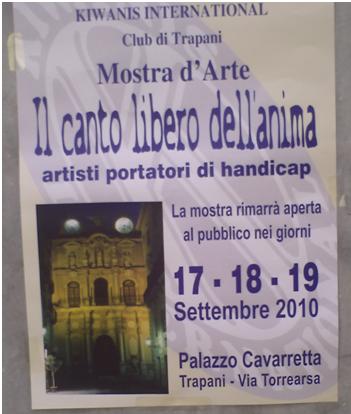 In this Palace, there is the Trapani Town Hall 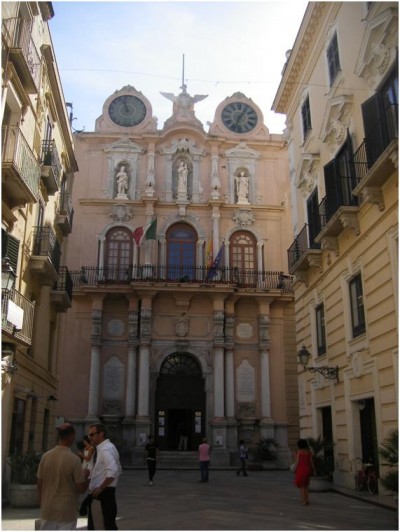 If you look at the photo, we can see its magnificent baroque facade. In the upper part and in the center the statue of the Madonna of Trapani, of great veneration. Beside him, S. Giovanni and S. Alberto, patron of the city.
They are the walkways for the inhabitants of Trapani, from this point to the Plaza del Pescado it is an ideal place to walk.

Recently rebuilt, trying to give it its former splendor, as a place for visitors to walk and also house, within its walls, various temporary exhibitions of fine arts. 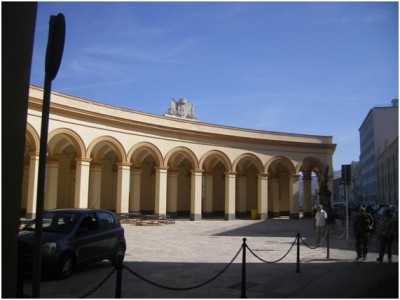 In its center, there is a very beautiful Venus (Next photo) 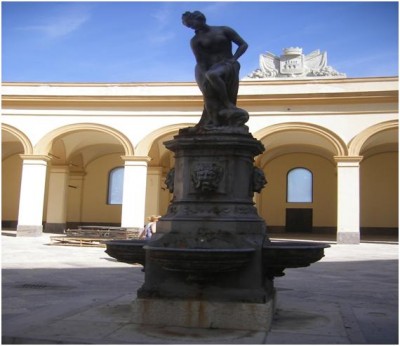 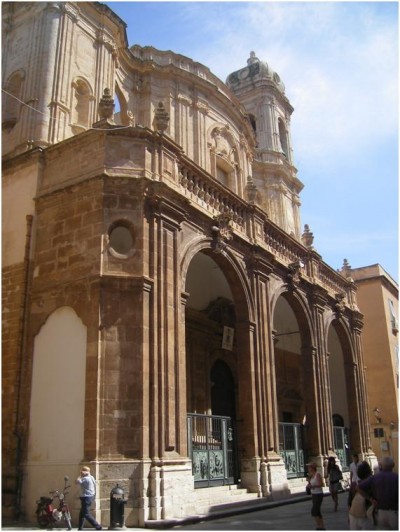 Among its treasures: The Crucifixion of Van Dyck.
Admission is free. Opens at 8.00 a.m., closes at 1.30 p.m. In the afternoon it opens at 4:00 pm and remains open until Mass ends.
Very interesting and worthy of observing, its stucco interior.
If you are interested to see more photos of the Cathedral you can visit this gallery. 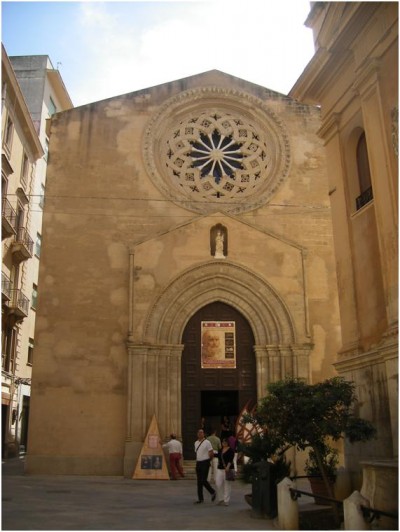 It dates from the 18th century and we must look at its rosette, with crossed recessed arches. It houses temporary exhibitions. Specifically, on the dates of our visit: The genius of Leonardo da Vinci (later we talk about it). 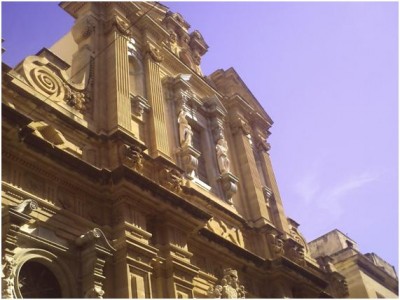 Let's look at its impressive baroque facade. In the following photograph, detail of the interior of the Church. Specifically, your Pulpit: 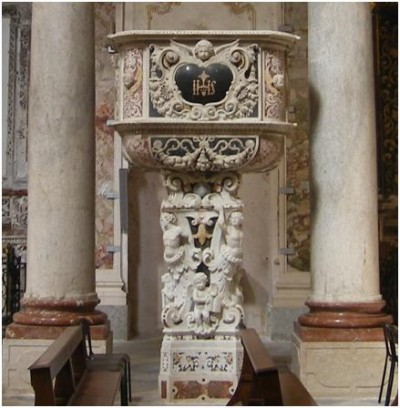 In the photograph, a bicycle that gave the feeling of manageable. 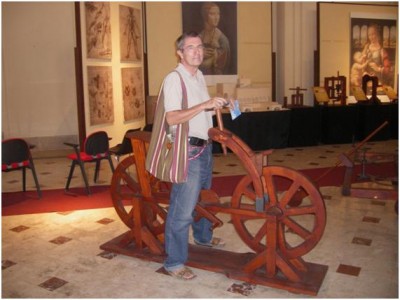 Next, the diver model that devised Leonardo's genius 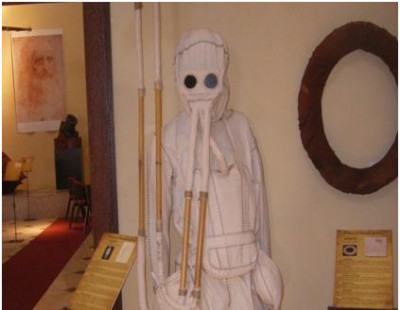 As we said in the Church of San Agustín, it houses the exhibition on the Genius of Leonardo da Vinci. If you wish, you can see more photos of the museum in this gallery. 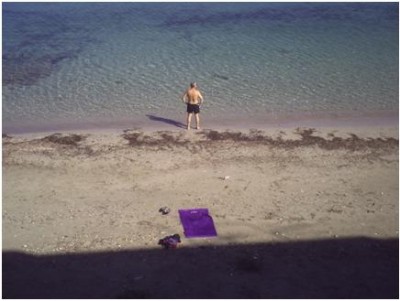 Its waters are crystal clear and you can take your bath very close to lazy seagulls.

Another photograph where you can see the transparency of its waters. 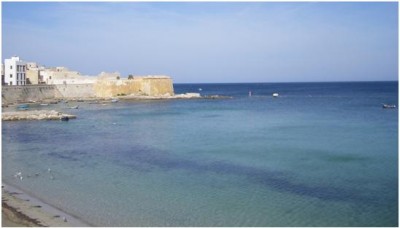 In the previous photograph, we appreciate where the “sickle” is narrowing and if we walk in the direction of the buildings that appear in the background in the photograph, along the beach, we would reach the Ligny Tower and the sharpest part of the “sickle” "

On the way to Birgi Airport, the closest to the city of Trapani, there are its salt flats and its historic mill (in the following photo). We have already said that together with fishing, coral and some other source of money, they were the source of income in the area. 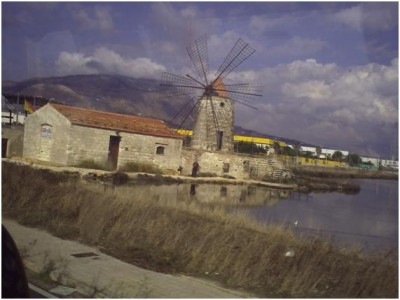 The salt extracted and piled up, prepared for expedition to the consumption areas (in the following photo) 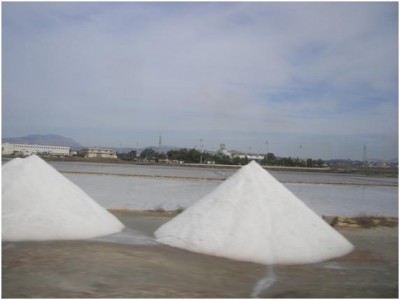 How to get there … and how to get around

We made the flight from Valencia in Ryanair (there are also flights from Barcelona) to Birgi airport, the closest to Trapani.

From the Birgi Airport to the city of Trapani there are buses from the Teravision Company, which depart to the center of Trapani (including historical center), once the Ryanair plane has arrived.

Through the city, there is an urban bus service, with number 11, which runs through the monumental part of the city. They told us it was free (but we couldn't confirm it).

Trapani Line – Palermo. (I moved by train to Palermo. See how to get there. Palermo).

Accommodations (Where to sleep)

There are a limited number of establishments to accommodate visitors and almost all of them in the historic center. 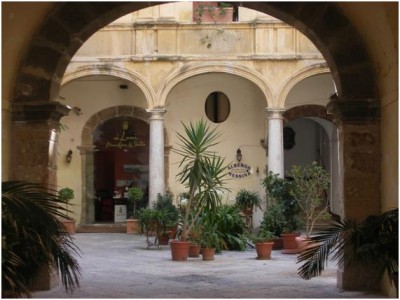 In the photo, the entrance courtyard to Albergo Messina, in the old and tourist part of the city. Share entrance with the Ai Lumi, although they are two different hotel establishments, being the most economical price Messina.

It is easy to ask in the street, in the places where you have breakfast or eat, where to sleep. In addition to the two mentioned, they recommended the Hotel Victoria, commenting that the value for money is good and that I would rest well.

And finally, the private houses, which rent rooms, the “affitacamere” (of all types and with different conditioning.) That you can find shortly when you ask and interest yourself. And the hostels, cheap and usually in shared rooms and with which it is very easy to find and book online.

The tourist information point is located on the Garibaldi road. In a more than correct Castilian they attended me. (The truth is that it looked pretty Spanish in the city). What was my area of ​​interest when visiting Trapani? They gave me the following map, with the indication that I went to the Historic Center, towards the Cathedral and the area of ​​the port from where the boats started … 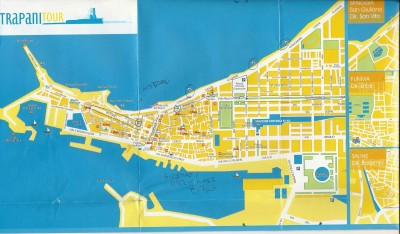 How to visit the city? Starting from the Victoria Hotel, in the Via Francesco Crispi reaching the Via Garibaldi – Liberta, then reaching the Via Corso Vittorio Emanuele, leaving you, on that walk, the sea on your right, until you reach the Tower of Ligny (the “ tip of the sickle, as we said at the beginning), perceiving at all times the salinity of the sea that permeates the environment, reaching its streets, its cobbled alleyways and each and every corner of the historic center. 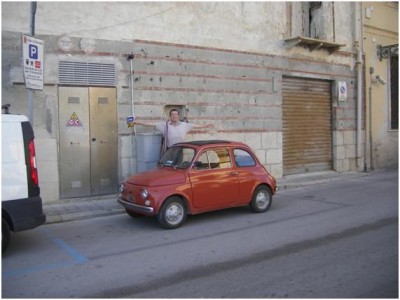 In the photo, a Fiat 500, a model that I frequently saw through its streets and squares. Irremediably made me turn my head. Evidently smaller than our Seat 600 which was once very popular on our roads. And you see their cars, you sit on a terrace, a busy square and you see how the city passes in front of you. And you walk along Vía G. B. Fardella and from a café you could listen to Spanish music, commenting on the person in charge of the summer resort in Fuengirola and who is in love with Spanish culture; Other clients talk about their stays in Spanish cities and places. Also, topics like football help you to communicate with people: I of Inter, because I of…

I arrived one day early in the afternoon! My first day there! You get more and try to go to the rhythm of its people. The conversation flows and as soon as you try, you make yourself understood. People are open and communicating, willing to help you with your problems when visiting the city.

You get the plane that appears above and with a comfortable shoe, first thing the next morning, the second day of your trip to Sicily, you go for a walk in the city. Because: TRAPANI APPARE SEMPRE ALL’IMPRO VISO¡. Besides, I didn't feel, at any time, a foreigner.

Go to the complete guide of Sicily.