Ustica It is volcanic in its stones and crystalline in its waters. I would recommend seeing: Markets (for fish and "Roman" for weight); also, in the security aspect (keys put in the door); the Art Spaces, on many facades of the houses, there are artistic paintings (The beautiful girl, perhaps her “girl”…; in another, a mother, with her children, waiting for the return of the fisherman father…), the theme of cleanliness , how their waste is transported. Its crystal clear waters, with abundance of fish and coral. In the next photo, the Lighthouse. 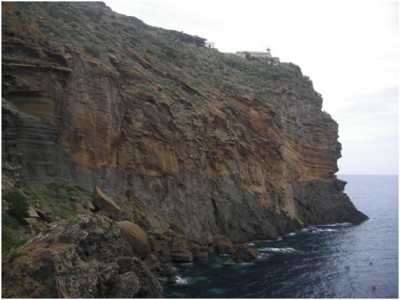 You arrive at Ustica in a “hydrofoil” (see how to get there), and people from the island, offer you to walk around the island, in their vehicle, to show you their corners, accommodation, place to eat… But above all, it catches your attention Two things: Being an island of a submerged volcanic chain (on the cobblestone of the ground, in the constructions of the houses, on the slopes of the mountains) and the second thing, which catches your attention, is the amount of divers who There are, coming from anywhere in the world. 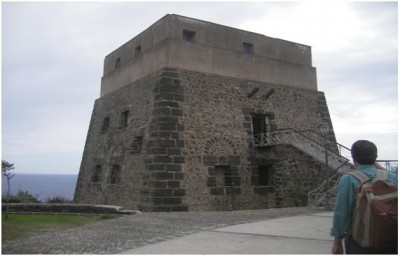 It is to reach the island, the Cala Santa María and if you continue, without losing sight of the sea, on the right, looking at the map attached below, you arrive at the Lighthouse (photo on the previous page), but if you go up to the highest part, you find the Tower of Santa Maria and contemplate the splendid view, which you see below. 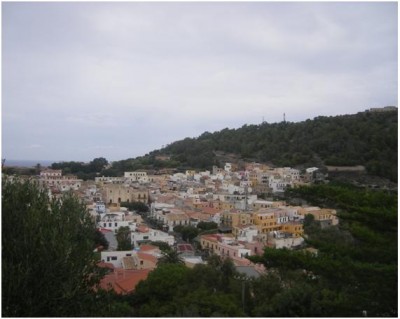 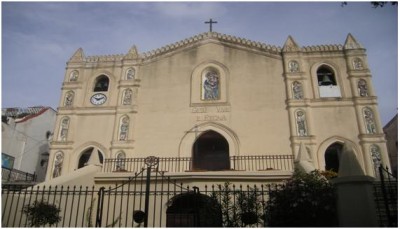 In the center of the town, passing the street selling area of ​​fish and other products, the Parish Church appears, as the photo appears.
In the following photo, the altar of the Church. (Very simple, very sailor …) 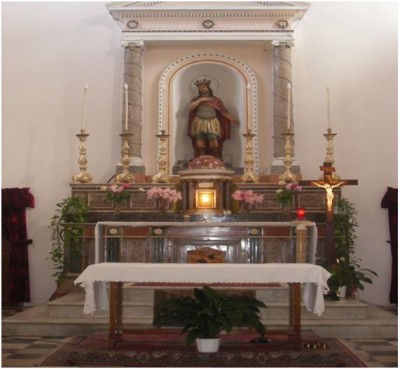 Artistic spaces (in the street): 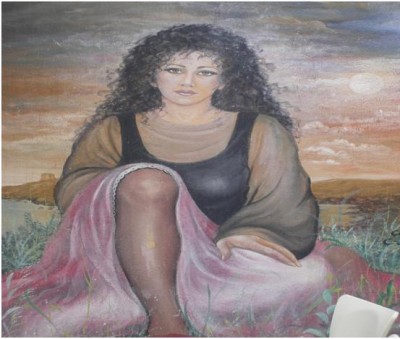 As it appears in the photograph, perhaps telling stories, wishes. 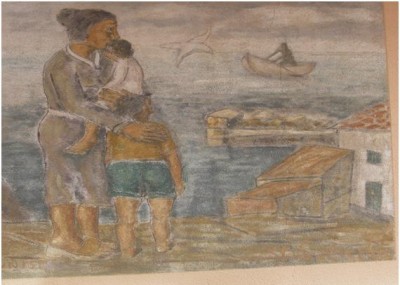 If you want to see more pictures of murals, do not miss this gallery.

In the Plaza, selling seafood, "heavy" with the old "Roman", which appears in the following photo 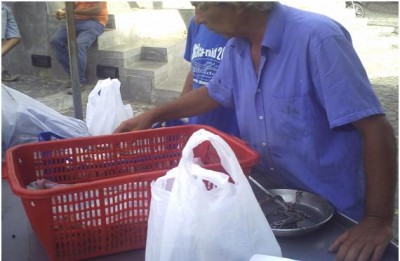 On the street, next to a small house, which was probably a fisherman's house, it was offered to the people who passed by, the merchandise that appears in the following photograph 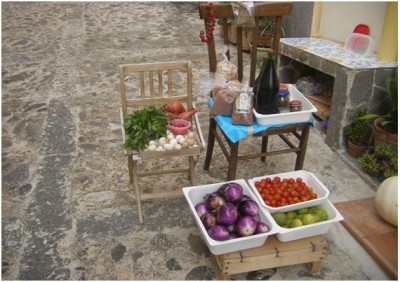 Own harvest, without intermediaries and probably without cold storage chambers. 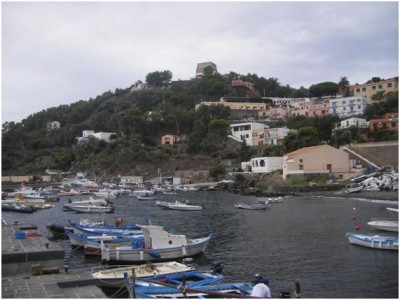 The whole island is pure nature, without pollution, even without noise, just your own life. Tourists relaxing and diving, coming and going, making themselves seen. It is a delight to bathe in its blue waters. In the extraordinary funds of the marine reserve, it is easy to find beautiful corals. And as for the terrestrial fauna, with a bit of fortune, it is possible to observe the Peregrine Falcon. In 1,986 officially, it becomes the first marine reserve in all of Italy. In 1,997 it is declared a Directed Natural Reserve. They say that the Atlantic current coming from the Strait of Gibraltar, keeps its blue colors incredible. Therefore, as we said, it is a visit by divers from all over the world. In the following photograph, seen from the island, on the opposite side where the hydrofoil (hydrofoil) came from Palermo.

How to get there and how to get around 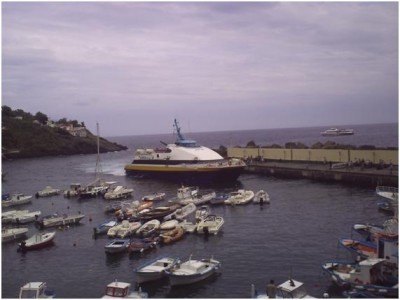 In the previous photo, the hydrofoil (hydrofoil) in which I came and that returned me to Palermo, the day after arriving. Specifically the Titian of the Siremar line, (Offices in via Roma 386, 90,139 Palermo). The trip is short and pleasant to cover the 60 km that separate the Island of Palermo. Departure from Palermo at 8.15 to arrive at 9.30 (every day) and return, at 15.00 to arrive at 16.15 (also every day). The company Siremar, from Palermo makes other routes also to the Aeolian Islands, Egades Islands, Pelagias Islands, etc. There are a number of routes, on foot, to see, one inch at a time, the Island, with only 9 square kilometers of surface, with trails to enjoy nature, with tours to contemplate archaeological remains and itineraries by boat. The Island is divided into three zones (A, B and C; see the plan that appears in Tours …) In Zone A, for any activity, whether fishing, diving and even swimming, an official permit is required.
There is a bus, which departs from the center of the town, with a circular route, with a frequency of approximately 30 minutes and which runs throughout the island. Also, as if receiving you, when a nice gentleman with his old Fiat 500 descended from the ship, he offered to take you and that you could take the best photos of any island. Other people offered their private vehicles for you to see the Island. And another possibility is to rent a cheerful red moped at the Aristón Hotel (which I will talk about later in the Accommodation section …). But, honestly, "kick" the Island on foot, it is worth it and you will enjoy …

If the Island of Ustica has 9 square kilometers of extension, just over 1,000 inhabitants, therefore, the "ratio" of hotels is not necessarily very extensive and the establishments are not at all distant. If in Trapani you asked and recommended the Hotel Vittoria, “because there you would rest and the value for money was good”, if in Palermo for your comfort and situation, you could rest in Artemisia, here in Ustica we can mention:
Hotel Chelia, located in the heart of the historic center, very close to the main Placeta…. It is nice and they were kind enough to give me enough information and brochures on the island.
Hotel Giulia, very close to the previous one and 500 meters from the Port, with “L´Angolo delle specialittà de Giulia” restaurant, with the typical cuisine of the island, fresh fish and couscous.
And finally, the Ariston, in which I would stay … Located in the center of the town, 30 meters. from the main square, with restaurant service and good views of the Cala S. María. Rent mopeds (as we said), boats and immersion equipment. A pleasant atmosphere was breathed.
It is possible to look for an “affittacamera” (more or less large rooms, with or without views, on a rental basis). In any place, more or less crowded, questions. It is also an experience to live with the locals (this is a constant for all of Sicily, the same goes for Trapani, as for Palermo). A place to get, probably, the best information about it: The Central Bar.
Another hotel is the Diana, a little further from the town center, near a cove and overlooking the Ustica countryside.
And finally, other hotels, the Patrice and the Ustica. 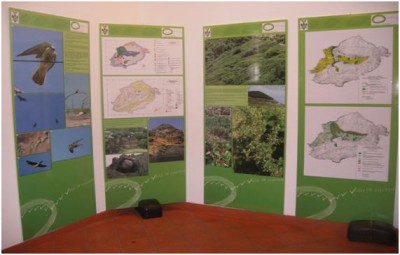 I was attended by the Head of the Nature Reserve Surveillance Service. Very kindly. Working with the motivation to conserve endemic plant species in the area, such as Boccone Limonium, which is a protected species and to which they pay close attention. On the walls of the office, drawings of birds, with the legend: "Vola en reserva". Located in the center of the town, on the main road, it advises and guides you, on any subject you need about the geology, vegetation, and fauna of the island and the possibilities and warnings to take into account according to the area of ​​the Island where you are, for the activity you want, boat rides or scuba diving. The customer service hours are as follows: From 8:00 a.m. to 1:00 p.m., Monday through Friday and Saturdays and Sundays from 8:00 a.m. to 2:00 p.m. More information at: tgpc@provincia.palermo.it
In the following photo: Boccone's Lemon

And I wanted to add, two photographs, dedicated to divers who enjoy its waters, whether for pure fun or for research. 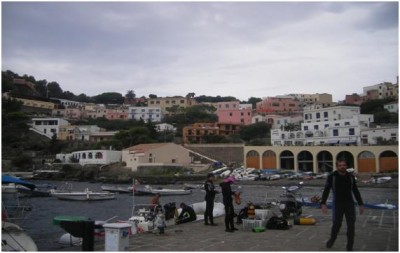 In the Cala de Santa María, near the Port.
In the following photo, scuba divers around a dive. (Looking at the bottom, the Tower of Santa Maria). 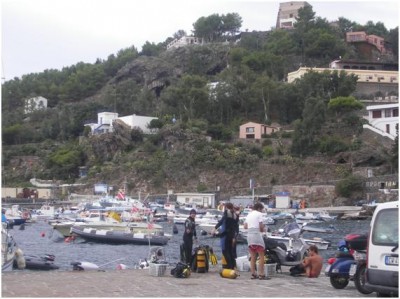 What we have already said and what we insist on: Comfortable shoe, your backpack with the necessary and walking the island on foot. A map of the island is attached. The ship arrives, as we said, to Cala S María. To the right and a little upwards, there is the Lighthouse (of which there are photos) and to the left, the Torres de S. María, with beautiful views. If we observe, we see the separation of zones: The A, in which without official permission, it is not even allowed to bathe, the C, the next to the Port. 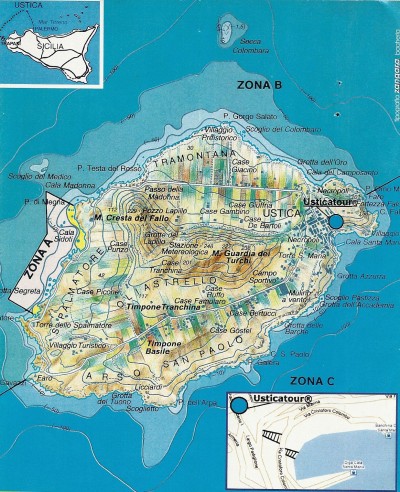 Go to the complete guide of Sicily.