The typical costumes of Mexico are the result of a mixture between the indigenous and Spanish culture, as well as vestiges of the Indians, Aztecs, Mayans and other ancestral indigenous groups. Typical clothing represents not only the culture of the country, but the habits of the more than 60 million inhabitants that Mexico has.

Aguascalientes is a state of Mexico in which the San Marcos National Fair, which is celebrated annually between the months of April and May.

In it, competitions are held that reward the best costume and, therefore, the costumes that are seen in this party are the most elaborate, colorful and striking. They highlight the costumes of women, who are the ones who spend more time and those who participate in these competitions.

Although you can find the most diverse suits, the most typical costume was designed by Jorge Campos Espino and wore a great variety of ornaments, which means that none of these dresses is missing a great variety of drawings that represent from animals to fruits, all of them always made by hand.

The woman's suit always has a high neck, wide sleeves on the shoulders and is very tight at the waist. 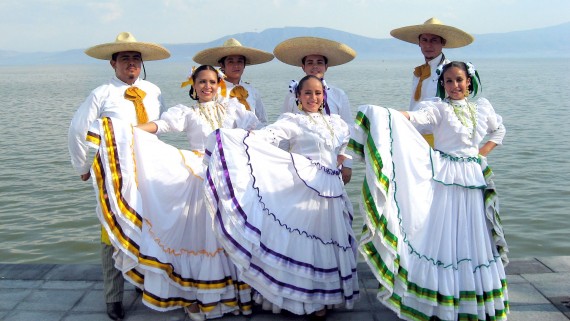 The most typical costume of Chiapas is that of Chiapaneca, which originally comes from the Mexican municipality of Chiapa de Corzo. It is estimated that the suit, which consists of colorful flowers on a black background or a dark tone, was initially designed as a means through which to represent the jungle and its fascinating flora, in which the colors stand out.

The suit consists of a satin blouse with a semi-circular neckline that leaves the shoulders in the air. The bottom, the skirt, is all embroidered with colorful flowers, among which the colors orange, pink, blue and white predominate.

For embroidery of flowers, silk thread is used, which is why the production process is durable and requires a lot of patience. It is also typical quechquémel, a kind of blanket or poncho that is placed on the upper part of the body and through which the head is introduced.

It also highlights the fabric and motifs of the traditional wedding dress of the municipality of Zinacantán, also located in Chiapas, which can be seen in the photo shown below. 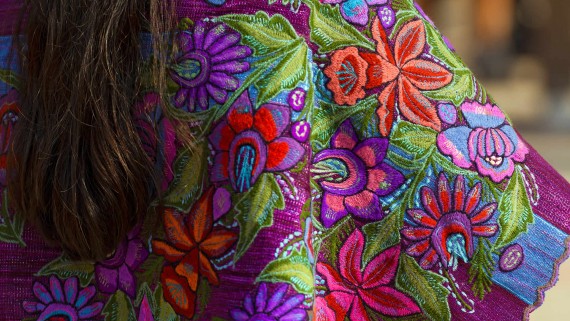 The archaeological site of Chichen Itza is located in the Yucatan Peninsula and is part of the indigenous legacy that has reached to this day. For this reason, the surrounding inhabitants have indigenous customs resulting from the tribal culture that has been preserved in the area.

Thus, clothing is characterized by costumes in which there is no lack of flower embroidery with a wide color palette on white backgrounds. Female dresses can be found in numerous colors, but they always stand out for a main feature: they go tight at the waist. 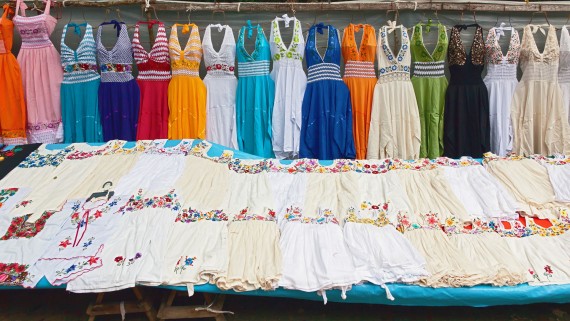 In the city of Guadalajara (Jalisco, Mexico), both men's and women's suits are called charro suit, although this name is known throughout the country because these costumes have gone around the world.

As for women, this consists of a tangle of blanket whose length reaches almost ankles. The skirt is covered with embroidery made with the cross stitch technique in a linear fashion and with threads of a wide variety of colors.

The man's one may well be the typical mariachi, which is black, adds some color details and includes a charro hat, or it can include a kind of poncho made of sheep's wool fabric, llama, alpaca or other animal.

This poncho has an opening in the center through which the head is inserted and usually has thick stripes or other designs of different colors. In its origins, the poncho, which today is used throughout Latin America, was used by Indians, mestizos, whites, gauchos, etc. And it is still preserved today. 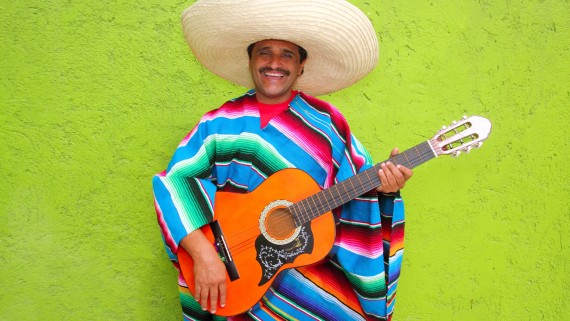 In the Mexican state of Hidalgo, three regions can be distinguished in which a cultural identity predominates that stands out for having its own traditions and customs, among which the clothing stands out.

Thus, we find three distinct regions: the Sierra Tepehua, he Mezquital Valley and the Huasteca.

The Tepehua are an ethnic group whose traditional dress is characterized by being designed for a mild climate, so it is a blanket that almost always includes red embroidery, although green thread can also be used.

As for the Mezquital Valley, the outfit is quite similar to that of the Sierra Tepehua region, since it is also made of blanket, but the embroidery it wears is called pepenado and can be found made of black, red, blue, green thread, etc.

In the latter, a hot and humid climate predominates at the same time, so the typical costume consists of a white short-sleeved blouse on which embroidered flowers are woven in an infinity of colors. 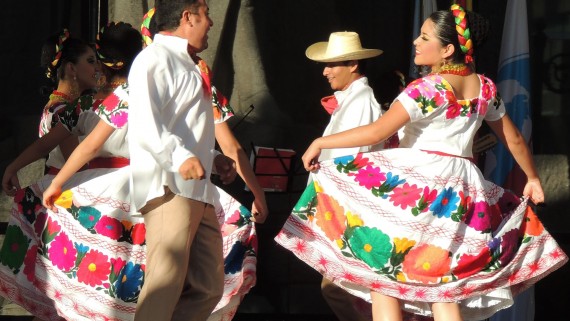 The culture of the Mexican state of Michoacán is known as Tarascan culture or purépache, which already existed in the pre-Columbian era, about the year 1200 B.C.

Thus, the current Purépecha people have specific indigenous traditions among which there is no lack of typical clothing, the result of the various artisan activities carried out by the inhabitants of this community.

Special mention deserves the women's suit, which consists of a skirt and a shirt. As for skirts, there are two types:

Shirts can be found of different types, although perhaps the most common is a shirt that folds over the chest and back, and is embroidered with white or colored details. 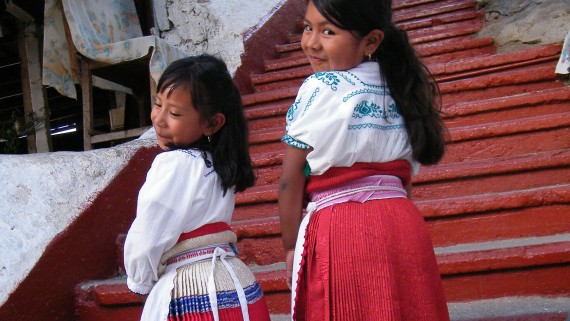 The Coras and Huicholes Indians They have maintained their tradition for thousands of years and, currently, the typical Nayarit male costume is that of Huichol, derived from the creative culture and the characteristic artisanal skills of this indigenous community.

Huichol women are known for being the best weavers in Mexico, mainly for their artistic abilities and their manual dexterity which result in extraordinary woolen garments with unique designs.

The male suit is characterized by the use of a white blanket and a shirt that has the bottom of the sleeves open and is embroidered with symmetric designs of different colors.

As for the female suit, it consists of a single-colored blouse that includes exterior and interior naguas and on which a mantle that covers the head and chaquira necklaces is added. 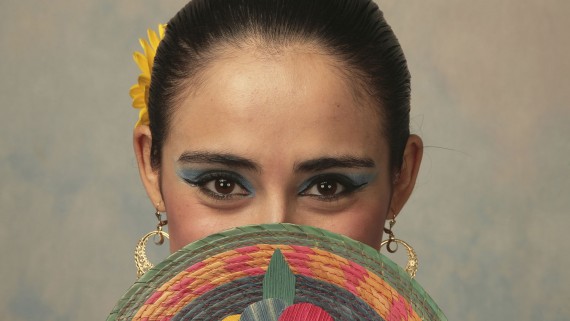 Although all the typical costumes of Mexico are characterized by being very colorful, perhaps the dress worn by the women of Oaxaca is the most colorful of all.

In these dresses a mix of indigenous traditions and colonial elaboration techniques, such as bobbin lace or flamenco holanes, among others.

In the Jamiltepec District specifically, the dresses have a wide range of indigenous symbols, such as the Sun, stars and other geometric shapes that often remind of spiders or lizards.

The skirt or typical curl is called posahuanco. 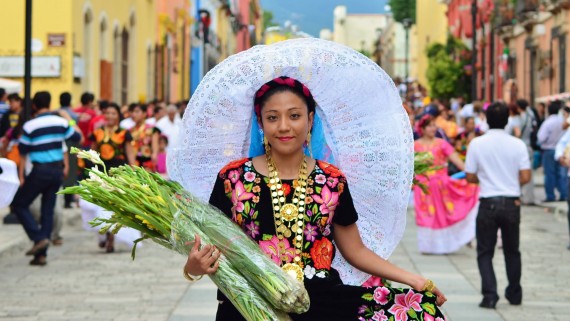 The typical costume for women in the state of Puebla (Mexico) is known by the name of china poblana, which is composed, in the upper part, by a low cut white blouse, so that part of the neck and chest is shown.

Its color is white and it is embroidered with colors that are usually shaped like a flower. At the bottom, the woman wears a skirt that is known by the name of beaver, due to the fabric with which it is made.

Said skirt, which can also be called zagalejo It consists of two layers: first, the top layer, which measures about 25 cm and is made of calico or green headquarters (known as cut); secondly, the bottom layer, which is covered with drawings made of sequins and reaches the ankles. 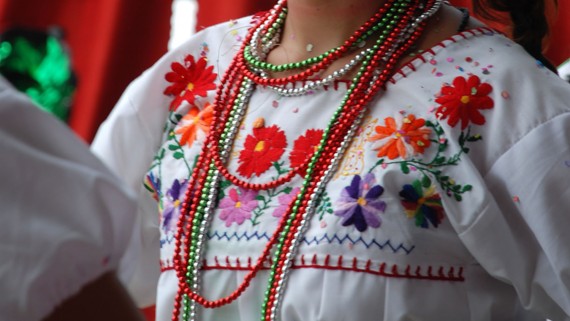 The city of Saltillo is the capital of the state of Coahuila de Zaragoza (Mexico) and whose typical male costume is known as serape or jorongo.

It consists of a kind of poncho that is used from its origins to shelter, since it is made of cotton fiber or sheep wool. The thread, as in almost all the typical garments of Mexico, is multi-colored and the designs that are woven are unique and open to the imagination.

As for the female attire, it is characterized by embroidered and frayed blouses that can be found in infinite colors and with flower embroidery or other geometric shapes.

The traditional female costume of Yucatán is called terno for the three pieces that compose it: fustán, huipil and jubón. The fustán (called pic in Maya) is the bottom part and consists of a kind of skirt adjusted to the waist and that reaches the feet. 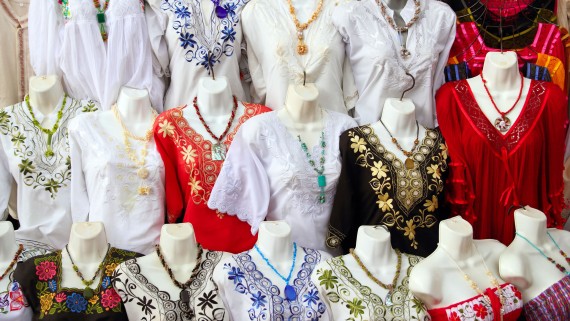 This skirt goes back to the time of Mayan women. The doublet is the square neck that is placed on the huipil, which is the white dress itself. In addition, this suit is complemented with a kind of shawl that is named rebozo de Santa María and a filigree rosary, handmade by the goldsmiths yuctaecos.

The typical costume of Veracruz (Mexico) stands out because in it the white color predominates, either in the case of male clothing as female, and is called jarocho suit.

The women's dress has a long and wide skirt that covers the ankles and, on the neutral white color, some lace or embroidery in various colors are sewn. On this skirt an apron or apron is placed that is usually black, maroon or burgundy and the fabric is velvet. 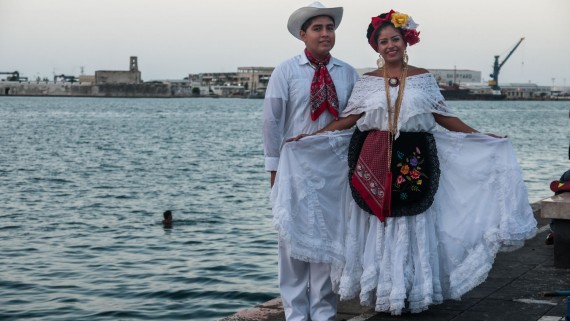 This apron can also have some embroidered details in different colors. The upper part is the same color and may or may not have sleeves. Finally, it also includes a silk shawl that is usually yellow with white details and may have fringes or other decorative elements.

The male attire, meanwhile, has white pants and a shirt also of this color, which should always carry four pockets (called bags in the area) and four saddlebags or folds in front and another six behind.

This article has been shared 474 times.