In Nicaragua, depending on the area to which we are going, we will find different models of traditional clothing. They are part of the country's folklore and most come from the typical dances. Here you will find the most prominent clothing in each department of the country.

In this area, formerly known as South Atlantic Autonomous Region, highlight the costumes used to dance the Maywood, an Afro-Caribbean dance that worships fertility and characterized by its sensual movements.

Although the skirts were originally long, nowadays women usually wear them short. On the top they wear a blouse, better known in Nicaragua as huipil.

They also cover their heads with a handkerchief. The clothes are bright and cheerful colors. The origin of this dance is in Bluefields, the capital of this region of the Atlantic coast.

This department is where we can find more typical costumes. One of them is the Inditas, characterized by a white dress, a shawl or rebozo red and a petticoat or fustian. In addition, wears braided hair and flowers or a basket on the head.

On the other hand, the Braid Costume It is inspired by the clothing of mestizo or indigenous women. It is formed by a white dress with colored braids, a black or red shawl and flowers in the hair. With this costume the son of marimba is danced. 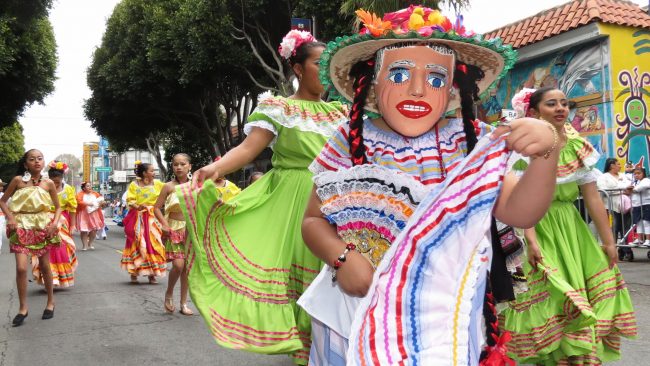 Another dress is that of the Agüizotes, which is the favorite of the children, as characters from legends and mythology of Nicaraguan folklore are represented. Some of the costumes are «the Quirina Death», the witch and the headless father. They can be seen on the last Friday of October.

Finally, for the Dance of the Zopilote, the man is disguised in black and with a mask that represents the buzzard, a bird of prey, while the women wear a long orange dress, a black shawl and flowers in their hair.

These central regions have their own traditional clothing. In Chontales, the woman wears a white long-sleeved blouse with cross-stitch embroidery and a round neck. Also, at the bottom they wear a long skirt with color and frills.

As for Boaco, the man wears blue knee-length pants, a shirt, and a palm hat decorated with ribbons and flowers. Footwear, caites or sandals It is a suit similar to that of the Masaya Indian. 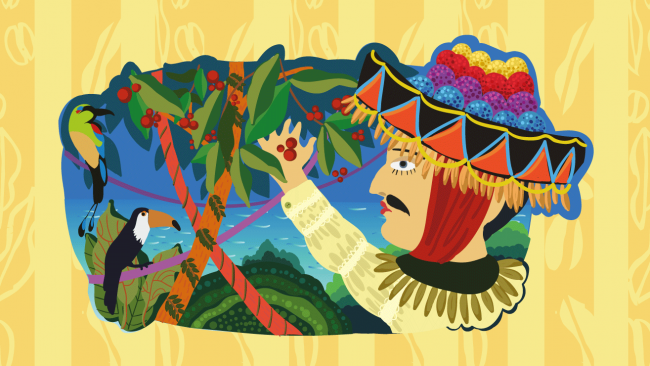 The woman in the traditional costume is called boaquena india. She wears a colorful short-sleeved blouse, a smooth and tight bodice, a colored petticoat and a shawl or rebozo.

In both the department of Chinandega and Leon, we find «The Mantudos«, A religious dance in which seven devils are tempted that tempt San Pascual Bailón. It takes place at the parties of May 17 and 18.

One of the disguised ones, the “greater devil”, covers his face with a black mask, while the others, the “devils”, do it with a red one. The rest of the clothes are the same for everyone. 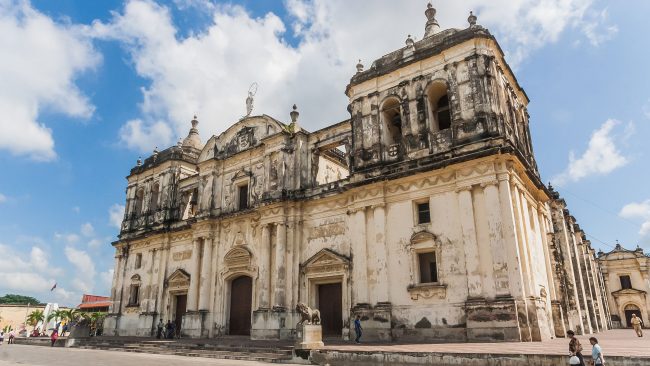 They wear a long-sleeved shirt and a worn suit. The pants have colored patches. To all this, you add a palm hat in which a mirror goes in front and behind flowers and ribbons.

Also, you can not miss a long mantle or red cape and adorned with diamonds. It makes noise with a kind of zambomba and rattles or chischil. The shoes are black shoes or caites, traditional sandals, accompanied by long red socks.

In Esteli the northern peasant costume. The woman wears a tight skirt, a handkerchief at the waist and another on the head, a long-sleeved shirt and earrings. The man wears long white pants, a white shirt, a scarf on his neck and a hat.

In Managua they organize the contest «Indian Beautiful«, In which a representative of Nicaraguan beauty and intelligence is elected. During this event, participants wear folk costumes. 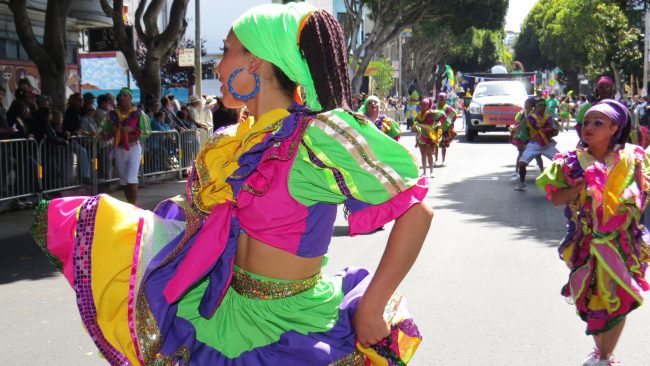 Likewise, in this department we also find the “La Vaquita” dress, which is worn at the management parties, and is composed of a cow mask, an embroidered shirt or güipil and a hoop decorated with fabrics that mimics a skirt.

Granada's male suit is characterized by wool knee-length pants, which is adorned with silver buttons. He also wears a woolen girdle at the waist, a white long-sleeved shirt and a black velvet vest and satin adorned with flowers and buttons.

On the other hand, in the female dress highlights the wool skirt with flowers hand embroidered, the black satin apron and adorned with rhinestones and sequins, and the long-sleeved black blouse with white lace on the neck and sleeves. 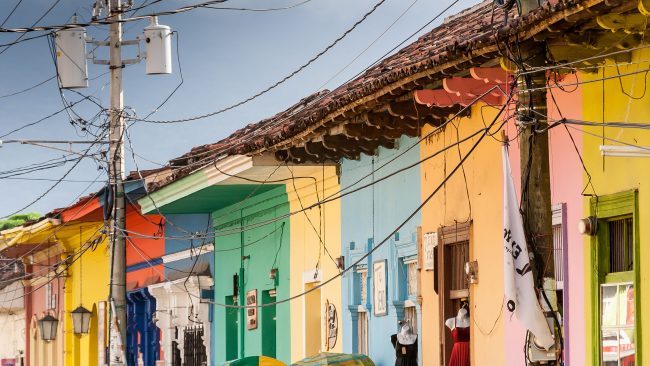 As for footwear, sneakers with esparto sole or espadrilles with colored ribbons are typical. Wool is used because it is an area of ​​cold weather Nicaragua. This clothing is also traditional in the department of Jinotega.

From the city of Diriamba comes «The Güegüense«, A comedy that is tradition to interpret. There are four clothes for this event. Women wear long dresses, necklaces and earrings.

The men can go disguised as Spaniards, with colonial suits and hats, high socks and masks with blond mustaches and light-colored eyes; or mestizos, with straw hats, humble clothes, sandals, mask with dark mustache and rattles. 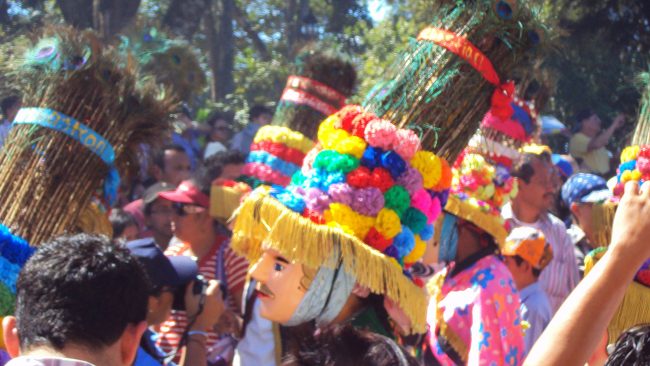 Finally, there are also males, barefoot, with a horse mask, a sequin vest, mane made with rope and a rattle or chischil Metallic to make noise.

In this same city the clothing of the old and the old is typical, which can be seen in the festivities of San Sebastián. In this case, two people go together with masks and old clothes, and dance to the sound of the marimba.

In Matagalpa we can also find the northern peasant costume, which we have already talked about. They also have their own traditional dress. In the case of men, it is a short blue pants, shirt and white palm hat.

As for women, they wear the «Matagalpa India«, Which is composed of a white gown with a tight waist, beaded or seed necklaces and a colored cloak or rebozo knotted to the arm. 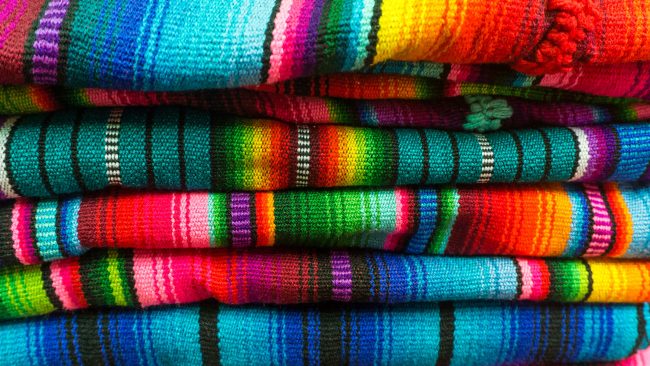 Men usually wear caites, traditional sandals, while women go barefoot. The clothes are not warm, since the climate of the region is mild throughout the year.

In Rivas, as in other Pacific territories, the Miscegenation Costume, whose history has a strong Spanish influence. The women wear a colored skirt adorned with sequins and a hat and fan with feathers. This clothing is called "luxurious Indian costume."

On the other hand, the man wears a white shirt, a dark cape decorated with sequins, a hat with a red flower, bulging pants, white socks and slippers.

Also, from this area the suit of güipil, which is considered the traditional mestizo clothing of Nicaragua. It is formed by a shirt, which is usually accompanied by a long skirt with flight, earrings and braided hair. 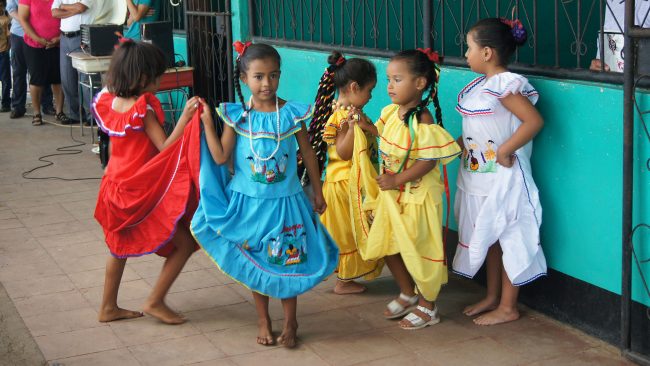 In addition, a blouse with four holes is worn: one on the chest, one on the back and one on each shoulder. These holes symbolize the four cardinal points for the natives.

Indigenous miskitos from the North Caribbean Coast or North Atlantic Autonomous Region (RAAN), they celebrate during January a curious party known as King Pulanka, which for them means a mockery to the settlers. 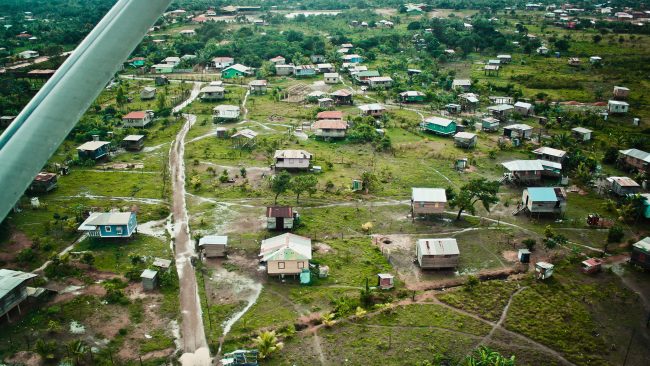 In it, a girl and a boy are chosen to be crowned queen and king and a dance is organized. Likewise, kings are accompanied by ladies and gentlemen of honor.

The king is dressed in a coat, a tie, bright ornaments, glasses and crown. Meanwhile, the queen wears a long suit, a veil, a makeup face and a crown.

Madriz and Nueva Segovia are near the border with Honduras. Despite not highlighting in them any regional costume, those considered national are traditional, such as the traditional mestizo costume.

However, in Ocotal, Nueva Segovia, the Holidays in Honor of the Virgin of Asunción are celebrated in August. In these dates a queen is chosen and it is very common to use folk clothing.

Also, in Río San Juan, the Aquatic Carnival, in which the inhabitants disguise themselves and the boats are adorned, organizing a horseback ride along the internationally famous river.

This article has been shared 110 times.