In the Andean Region of Colombia, Bolivia, Peru and Ecuador the typical costumes stand out for their bright colors, textures and shapes. In what follows we tell you what is the traditional clothing and accessories of this area in each of the countries mentioned above.

The Andean Region of Bolivia is the territory that extends from the Andean Highlands to the Andes Mountains.

The most characteristic women's costume of the Bolivian Andes is that of skirt, which consists of a pleated skirt that is characterized by its bright colors and by wearing different motifs and designs, usually floral.

Actually, this costume was, in its origins, a traditional Spanish dress that colonial authorities imposed on indigenous women. The skirt suit is currently considered a indigenous pride symbol.

In the following video we can see a group of Bolivian Andes musicians dressed in typical clothes of the area:

Also the suit known as Hello It is common in women in the Bolivian Andes, which consists of a long pleated skirt, an embroidered blouse and a ruana, a kind of typical shawl throughout the Andes Mountains.

Under the skirt, women wear a crinoline, which consists of a polisón that they carry underneath so that the skirt is bulky.

In addition, women, especially those from indigenous villages such as the Quechua or Aymara, accompany the chola suit with a bowler hat, that is, a hemispherical hat of felt and low and rigid cup, a custom that dates back to the 1920s.

Men traditionally dress with cloth pants, a fabric that is made from wool, and the so-called chumpi, which consists of a kind of belt that is tied to the waist used primarily to protect the lower back during long hours of agricultural work.

Finally, the men of the Bolivian Andes carry a juyuna, which is a vest made of wool and decorated on the front with various buttons. 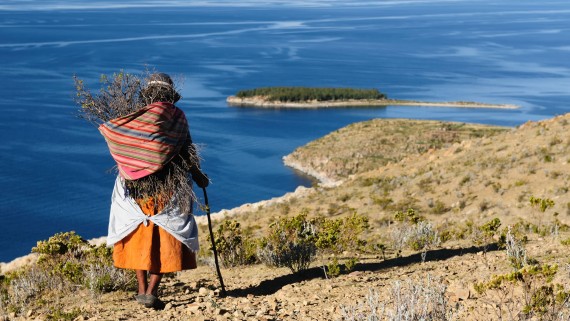 It also highlights the famous Oruro's Carnival, religious celebration that has been declared Masterpiece of the Oral and Intangible Heritage of Humanity by UNESCO. Thus, today, it is not only the most important holiday in Bolivia, but one of the most outstanding in all of South America.

The city of Oruro, whose name derives from the ancient Uru civilization, is the folkloric capital of Bolivia and that is why this celebration takes place in which dance or ritual draws attention Tinku, in which the vivid colors of the suits stand out. 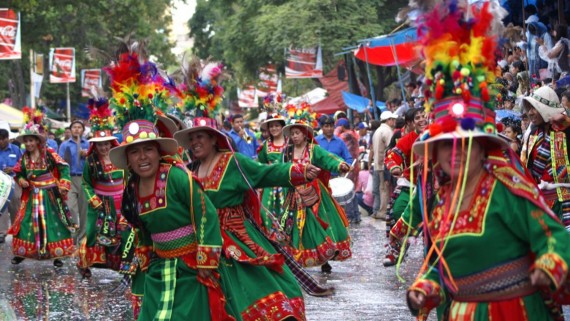 Although in each region of the Colombian Andes there is a specific costume because each one has its own traditional festivities and dances, there is a common garment: the so-called ruana.

This garment consists of a kind of cape similar to the usual poncho of the charro suit in traditional Mexican clothing. In the following video you can see an interpretation of the guaneña, a typical dance of the Colombian Andes in which they wear a characteristic costume:

The ruana is made from wool and the way to carry it is as follows: it is wrapped well around both shoulders, or around one shoulder and hanging slightly from the other. The origin of this garment is most likely due to a hybrid between the long Chibcha ponchos used by the Muisca indigenous people and the Spanish cape.

In addition to the ruana, in Boyacá and Antioquia, for example, it is common for the boyacense peasant to wear denim pants, a cotton cloth shirt, espadrilles and the popular treadmill hat, Antioqueño hat or paisa hat.

Women usually wear a long black skirt made with presses and adorned with bright colors and ribbons, so that the skirt has different reliefs and textures. 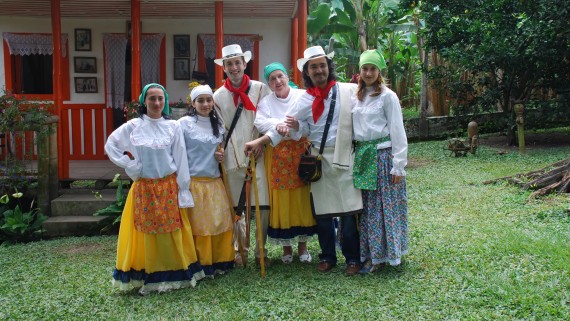 The Ecuadorian Andes comprise a territory known as Ecuadorian Sierra in which settlers whose origin dates back to the Incas in the following towns: Pichincha, Carchi, Chimborazo, Cañar, Azuay, Tungurahua, Loja, Cotopaxi and Bolívar.

Although the typical clothing of this territory varies according to the cities that comprise it, it is true that the clothing of its inhabitants is characterized by being sheltered (jackets, coats, warm shoes …). The indigenous communities of the Ecuadorian Sierra maintain the traditional clothing of their ancestors, among which the use of ponchos or ruanas is not lacking.

With regard to women, it is very traditional that they dress with the popular anaco, a kind of blanket that wraps around the waist and reaches the heels. 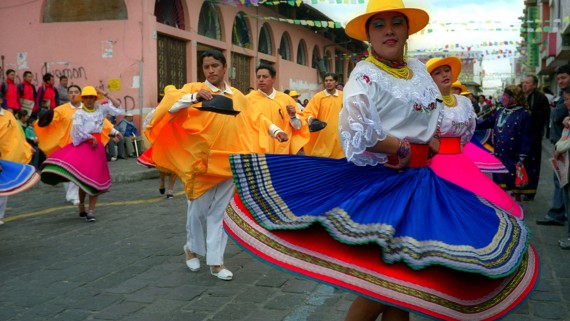 Above the anaco is an embroidered girdle so that it is at waist level. At the top, it is usual to wear a white shirt and very baggy. The footwear is the famous espadrilles, made of cloth and fiber of cattails.

As for the men's clothing, this is simpler than that of women, since it consists of shorts at the ankle and White color, combined with a shirt also white.

On top of this shirt they usually wear a ruana or poncho typical of the Andean Indians to protect themselves from the cold. Like women, men also wear espadrilles.

The Peruvian Andes constitute the central part of the Andes Mountains and are also known as saw, Mountain range Or simply, Andean region.

The Peruvian Andes connect the South with the Andean Region of Bolivia, which is why the culture, crafts and clothing of its inhabitants share great features with that of the Bolivian Andes. 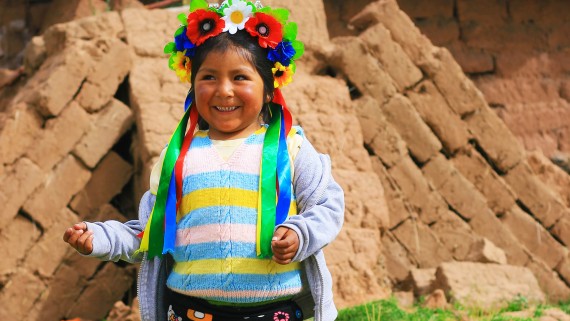 The Aymara tribe or aimará is one of the indigenous towns of South America with greater presence in the Andes Mountains, especially in Bolivia and Peru.

The Aymara, like the rest of Andean populations, share the ability to make brightly colored fabrics that result, among others, the famous ponchos or ruanas.

In the language of the Aymara, their clothing is called Aymar Isinaka and in her they are habitual: 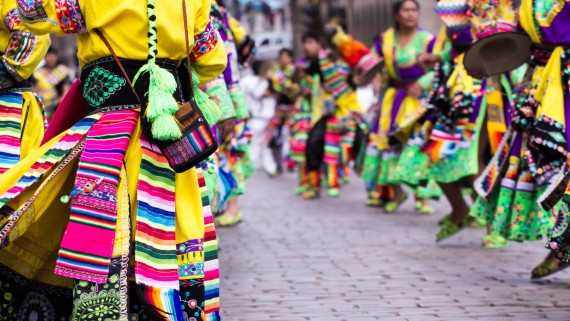 Anaco is also a typical outfit among the women of the Peruvian Sierra, more specifically, in the city of Tacna, where it is known as Anaco de Camilaca, in which red and black colors predominate.

Women usually wear this costume especially during holidays, such as Carnivals or Easter, and it is considered to be a symbol through which it is intended to exalt the presence of the indigenous population of Peru. The process of creating an Anaco de Camilaca is complex and very laborious.

They also highlight the typical costumes of the city of Abancay, as well as those of horseback riding that are held during the festivities of Cuzco or Cusco, a city located on the eastern slope of the Peruvian Andes. 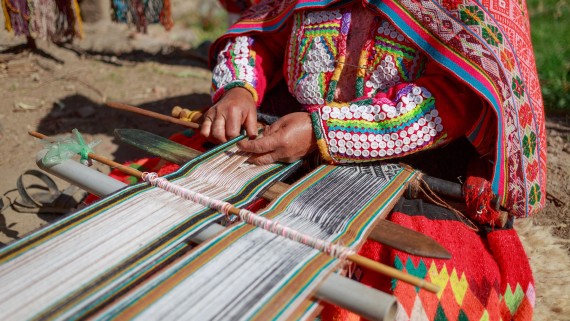 The Cuzco textile It is one of the most entrenched Andean crafts today, which includes the classic loom known as aguayo, he chumpi, the lliclla and the chuspa (kind of small bag).

The female attire of women from the Department of Cuzco is known as Cusco typical costume, composed of a red sweater that contrasts with the black color of the skirt of black cloth trimmed with wool ribbons whose thickness, motifs and colors vary according to the design of each suit.

The skirt, in most cases, is actually made with several superimposed skirts. At the top, women often wear handmade vests that attract attention because of their bright colors and the details of their design.

This article has been shared 135 times.