Folk dances from different parts of the world are so popular, that numerous international festivals are currently organized to meet them. In this article, we give you the names and information of a part of these dances, which are sorted by continents.

Starting with the recently emerged dances, U.S It is the cradle of break dance. This urban dance originated in New York in the 70s, specifically in the neighborhoods of the Bronx and Brooklyn. They are part of the hip hop culture.

To dance it is necessary to have flexibility, strength and important control over the body, since movements of great difficulty are made. It has influences from African dances, salsa and mambo. One of the best groups of break dance of the world is jabbawockeez, winner of a famous television contest.

Hip hop also emerged popping or robot dance, another street style characterized by precise and tense movements. It is accompanied with electronic music or dubstep. Some modern shows combine this style with light suits. 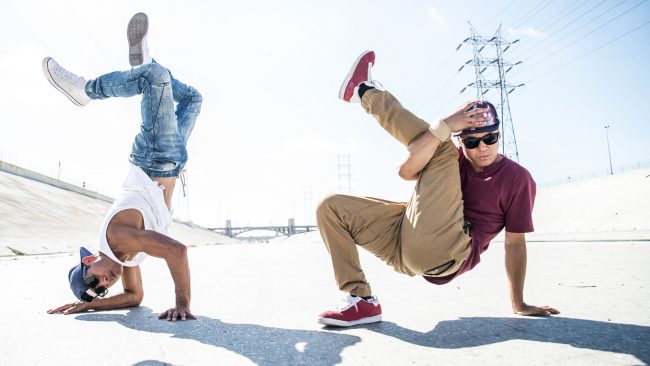 On the other hand, several indigenous tribes of the country, such as the Cherokee, had a ritual called «rain dance«. The inhabitants put on feathers and masks, and danced in circles to attract rainfall. It was believed that with them came ancestors, who fought against evil spirits. Therefore, it is considered a religious dance.

Some traditional US songs are usually accompanied by a choreography, such as Good old days, popular in the 20s, and Jingle bells. The latter, in origin, had nothing to do with Christmas, but with horse racing. In the following video you can listen to the song:

Another typical dance of this country is the country, which is popular especially in rural regions. An example is the song Oh Susana, which is part of line dance and, therefore, it is group.

Latin America and the caribbean

Folk dances abound in this area. In the case of Peru, the Sailor It is his national dance. It is danced as a couple and elegantly represents miscegenation between Spanish, black and indigenous cultures. In January, a relevant international contest is held in the city of Trujillo.

The sauce is originally from the Caribbean, more specifically from Cuba and Puerto Rico. It is a fusion between European music and Afro-Caribbean rhythms. You can dance individually or as a couple. Today it is spread throughout the rest of the world, especially in the United States and South America.

In Argentina the is typical Carnival. Its history is prior to the colonization of the continent. It is danced in a group of couples, which jump and form different shapes such as the wheel or the row. It is also practiced in Bolivia.

However, the most representative dance in Argentina is tango, although it is also native to Uruguay. It does not derive from any particular style, but receives influences from various currents. It emerged at the end of the 19th century between the popular and marginal classes. His choreography is energetic and transmits seduction.

In Mexico highlights the Squash, which the cowboys of Baja California develop during the fifties. Participants hit the ground and kick, mimicking the movements of farm animals.

Bachata comes from Dominican Republic. It began as marginal music in the 60s and, although in principle it was a type of bolero, little by little it was differentiated. It is from the 80's when it becomes popular and extends to other countries such as Ecuador.

The national dance of Brazil It is the samba. It is practiced during important holidays, such as carnival. It has its origin in Africa, since it was introduced by slaves in the 19th century. It is characterized by sensual movements.

In Colombia We found the cumbia, which began in the Caribbean Region. It is a mixture between indigenous, African and Hispanic culture. Its name comes from the African word cumbé, which means "celebration." It represents the courtship of the man to the woman.

The last dance to become popular has been the reggaeton or reggaeton It is formed in Panama and Puerto Rico at the end of the 20th century thanks to the Jamaican community. It has changed over time. I used to take reggae music and make a social complaint. Currently, it is influenced by hip hop and the central issue is sex. Today, it has international fame.

China It is a country that had a large number of ethnic minorities. However, there are two popular dances throughout its territory, which are represented at the Chinese New Year celebrations.

One of them is the Lion Dance. Two dancers enter a lion costume and perform agile and acrobatic movements. It is believed that this animal attracts fortune. The other is the Dragon Dance, in which twelve interpreters hold the dragon costume and make it go up and down.

As we can see in the photo, the dragon costume is colorful and of impressive dimensions: 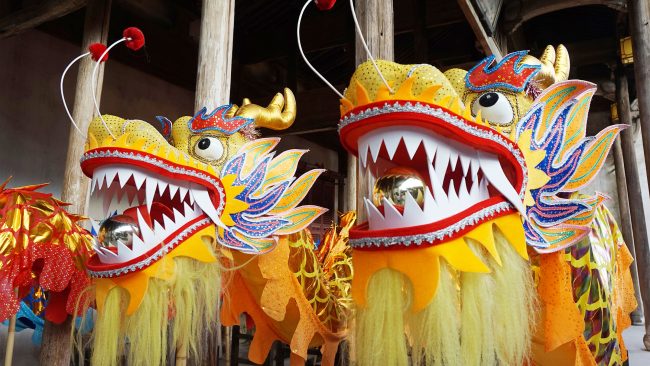 The Hebrew culture has various dances, which are practiced in Israel. One of them is Samoth, a group dance. The participants shake hands and form a circle. They also hit the ground with their feet and kick each other.

Two other choreographies are Zimer Atik and The wise and the crazy, which is based on a biblical passage. These Jewish dances are ideal for teaching primary school children, as they encourage group work and make other cultures known.

At Arab world Stresses belly dance, whose official name is Oriental dance. It is interpreted by women. It originated in Egypt thousands of years ago. It is characterized by the movement of the hips. In its origin, it was a fertility cult, both of the human being and of the earth.

In Japan we found the Nihon Buyou, a combination of dance and pantomime. Its only function is to entertain, so it is practiced on stage. It is interpreted by geisha, girls trained to entertain parties and meetings.

Hindu culture consists of eight traditional dances. One of them is the bharatantyam, which was created south of the India. He dances alone and has great technical difficulty.

In the following video you can see a Hindu woman representing this beautiful dance:

Another is the Kathak, belonging to the north of the country. With them stories are told through the movement of the dancer, who makes quick turns. It has certain influences of the Mongol empire. You can meet other dances of India in this article: The folk and exotic dances of India.

Over the centuries, African tribes have been developing their own culture and dances. These are usually related to the phases of life and nature, such as the transition from youth to maturity or the seasons of the year.

In South Africa we found a modern choreography, called gumboot or isicathlo. The men wear water boots and strike with them against the ground. Drift of the time of apartheid, in which the workers were forbidden to speak in the mines, so they communicated through sounds made with this footwear.

The hunters dance is represented in Ivory Coast. Two dancers are dressed as hunters, while another is wearing an antelope costume. They recreate the hunting of this one, reason why it is a zoomorphic dance. At the same time, drums sound, which begin to play softly and increase in intensity.

The masáis, who live in Kenya and Tanzania, are characterized by their well-known dance. The men are making incredible great leaps, while the rest sings. The higher they jump, means they are in better physical condition. It is a ritual to impress women and that they choose who to marry.

In the following images we can observe the Maso men carrying out this ritual:

In Ghana, the tribe Krobos represents the dance Klama in a ritual called Dipo, for which young women prepare for a season. With colorful clothes and necklaces, the girls move forward with small steps and with their heads down, while making movements with their hands and feet.

In Romania we found the dance called Alunelul, word that means "little hazelnut". To represent it, the participants form rows and small circles. It is easy to represent since, in general, it consists of taking three steps to the left and three to the right.

The Ramón dance belonging to Belgium. Two rows are formed: one of women, which put the arms in the shape of a jug. The other, of men, who hold their shoulders. Both sides hit the ground with their feet.

In France We found numerous dances. One of them is The Badoise, which is interpreted in pairs, that hit their thighs and clap their hands. Another is the call Dance of the Shepherds.

Flamenco is one of the most famous dances in the Hispanic world. It developed in Spain, more specifically in Andalusia, Extremadura and Murcia. It is usually attributed to the gypsy ethnic group, although it seems that its origin is Moorish. 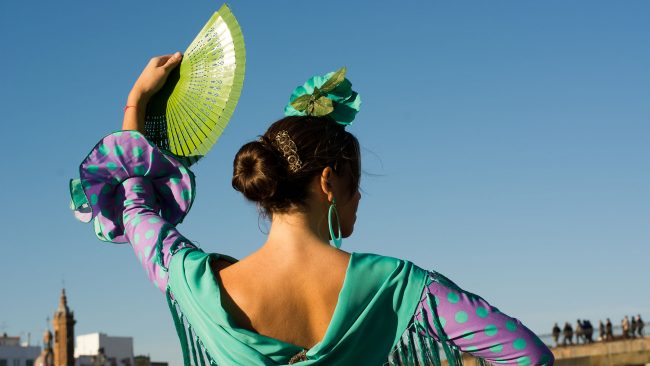 The Candil It is also a dance of this country, highlighted above all in Badajoz, Extremadura. It is represented mostly by young people and has influences from Portugal. If you want to know the rest, we recommend the following article: Typical dances of Spain: discover its regional dances.

In Greece we found the old dance Pear Stous Pear Kambous, which means "In the distant plains." The participants form a circle shaking hands. Also, the Sirtaki arose from a 1964 movie called Zorba the Greek. This choreography takes movements of the Hasapiko, a traditional Greek dance.

Ceili's dance of Ireland It is represented in a group and is accompanied by regional instruments such as the Irish drum or the violin. The dancers tiptoe and sometimes one of them dictates the steps. 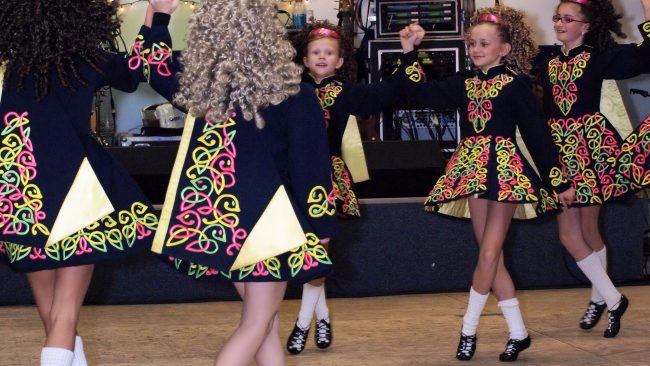 The tarantella It is a typical Neapolitan dance of Italy. Its origin comes from the Middle Ages, and means "tarantula." The peasants thought that when one of these insects itched, they should dance or die. At present, it is common to represent it even at weddings.

In Denmark we find The seven jumps, choreography that is carried out in a circle, jumping to the left and right. It is usually taught in Danish schools.

From Russia highlights the troika, word that in Spanish is translated as "team of three". The dancers are a man and two women, and they imitate the horses that pull the carriages.

He Jopak It belongs to Ukrainian folklore. It comes from the term jopati, which comes to be "jumping." In this activity, carried out by men, jumps and acrobatics are performed. It has influences on the training of Cossacks, a kind of military of the Middle Ages.

This article has been shared 88 times.