Colombian cuisine is varied and full of interesting recipes that are worth trying. There is no national dish as such, because in each area there are different recipes. Therefore, in this article we talk about some of the most popular food dishes in the country sorted by regions.

The insular region is formed by the group of islands of Colombia, among which are San Andrés, Providencia and Santa Catalina. These are some of the most outstanding dishes of its gastronomy:

The dumplings They are a companion for other dishes such as stews and soups typical of San Andres and Providencia. Are easy to prepare, you only need 500 grams of flour, a tablespoon of baking powder, two tablespoons of butter and a glass of water.

All these ingredients are mixed and with the wet hands small rusts are formed, although they can also be given other forms such as cakes, which usually accompany the following recipe: the rondón. 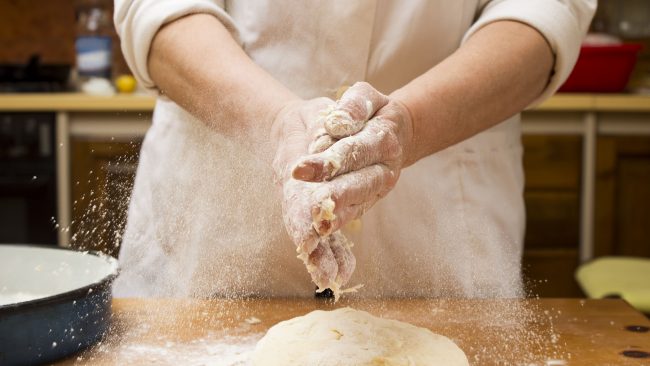 Rondón is a fish soup that has its origin in traditional African cuisine and arrived in the Caribbean with former slaves. Take fish, snails, seafood or pork. In addition, cassava, yam (a type of plant) is added, dumplings, banana, pigtail, basil and oregano.

Its name comes from the expression in English run down, What does it mean that something is looking for, in this case, coconut milk, an ingredient that was prepared before and used in the following video:

The necessary ingredients to prepare the crab soup are the following:

First, the pork tail is boiled for 5 minutes to remove the salt. On the other hand, the banana is boiled and the tail is added for seven minutes. Then cassava, yam and potato are added. Once they have softened, the crab meat and the other ingredients are put in, seasoned, boiled and put in coconut milk. 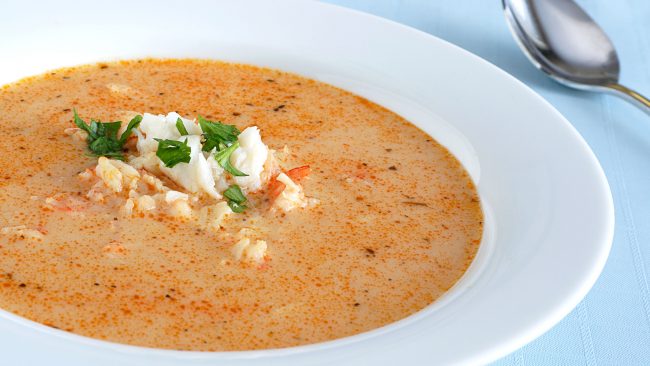 The Andean region is located in the center of Colombia and is made up of fifteen departments, among which are Risaralda, Quindío and Boyacá.

The paisa tray is a consistent dish with many ingredients, which are these: 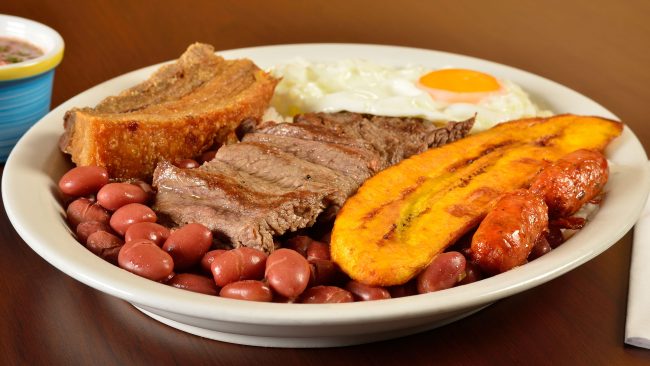 The night before to its elaboration the beans should be soaked. The next day, they cook and add a little oil and salt. The ground beef is fried with half the hogao and the rest of the meat is fried.

After this, the beans and the rest of the hogao are added and cooked for about 5 minutes. Finally, fried bananas and fried eggs. 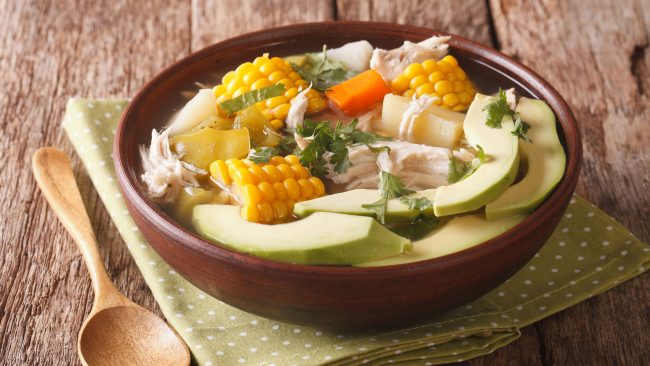 The Tolimense suckling is mostly cooked in the Tolima Grande region. It consists of preparing a pig whole of about 50 kg. To do this, clean, remove the meat and leave the skin and head.

The meat is marinated with chopped onion, garlic, salt, pepper and cumin. On the other hand, a filling of peas, lard and chopped onion is made, and fried with the meat.

The piglet is filled with this preparation and the filling alternates with rib bones to maintain the structure. Sour orange juice is added and baked for three hours at 400º and for two hours at 200º. It is accompanied with arepas of white and bland corn (a kind of custard). In this video you can know the history of the recipe:

The overbarriga is made up of beef and Creole tomato sauce. Overbarriga meat is cooked with onion, garlic, pepper and salt for three hours. As for the sauce, tomatoes, red paprika, onions, garlic, achiote (a spice), cumin, salt and pepper are fried.

For the presentation, put the sauce on top of the meat. In addition, it is served with white rice, cassava and avocado.

The Orinoquía region is also known as Eastern plains. Some of the best known plain recipes are:

The calf veal is also called mamona. The main ingredient is the veal of approximately one year, which is made four different types of cuts, which have particular names:

The female bear
the area of ​​the double chin, jaw, tongue and head is cut.
Shakers
The chest is cut into elongated strips.
The line
They are the hindquarters and are extracted with a round shape.
The heron
It is the udder area. 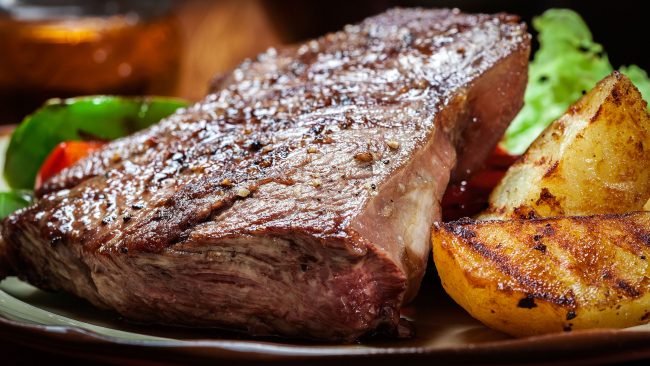 The sliced ​​meat pieces are covered with strips of veal skin, marinated with salt and baked between eight and ten hours at 250 °. It is also typical to cook them in crossed sticks on a bonfire.

First, you have to soak the meat in salt water for two hours and then wash it a little with a jet of water. After this, it is cooked for an hour, cut into tacos and cooked again with the bananas. 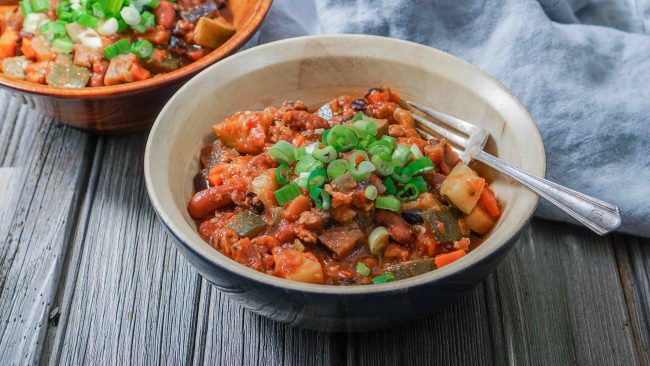 Finally, cassava, squash, garlic, onion are added and simmered for 25 minutes. When there are 10-15 minutes left, put salt, pepper and cilantro cilantro.

The mojarra is a sea ​​fish that in the Orinoquía it is common to cook fried. To do this, you have to have lemon juice, milk, wheat flour, oil, salt and pepper. The first step is to wash and dry the fish.

After it is soaked in lemon juice, salt and pepper are added and allowed to stand for 15 minutes. Then, batter in milk and flour and fry until golden brown. It can be accompanied by green banana patacones, white rice and salad. 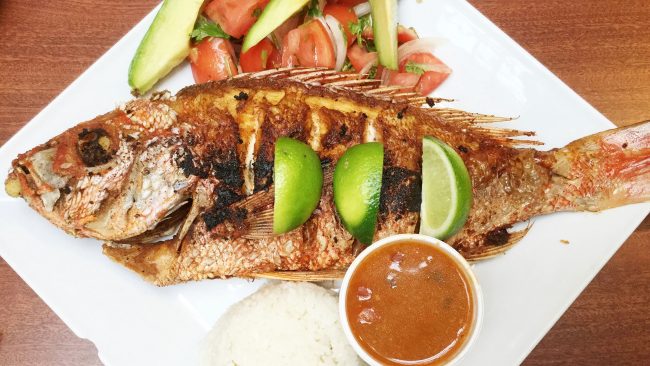 In the Pacific region we find part of four departments: Nariño, Chocó, Valle del Cauca and Cauca. It includes the east coast of Colombia.

The basic ingredients for cooking the tamale of piangua, a mollusk consumed on the Pacific coast, are: 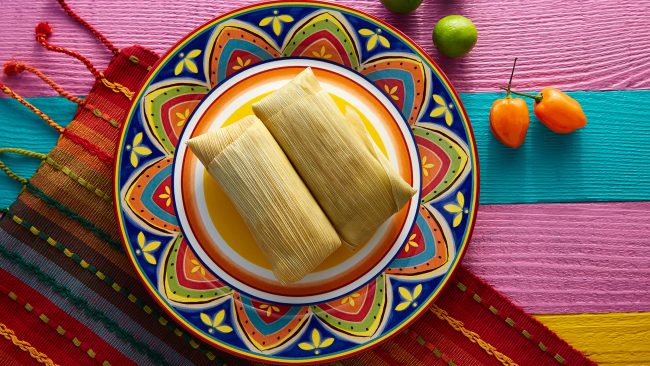 First, the plantains are simmered in coconut milk, drained and ground. The coconut milk is still heated for ten minutes and then fried with a glass of hogao for 15 minutes.

The banana dough is mixed with the pianguas, kneaded and coconut milk cream and potatoes are added. Banana leaves are placed in the shape of a cross and placed in them a part of the dough, pieces of egg and a spoonful of hogao. Finally, the leaves are folded, fastened with the pita or the rope, and cooked with salt for an hour.

To cook the boarded fish you need mojarra fillets, eggs, wheat flour, oil and salt. It begins beating the eggs and adding flour and salt until a liquid dough remains. Then the mojarra fillets are coated and fried until golden brown. 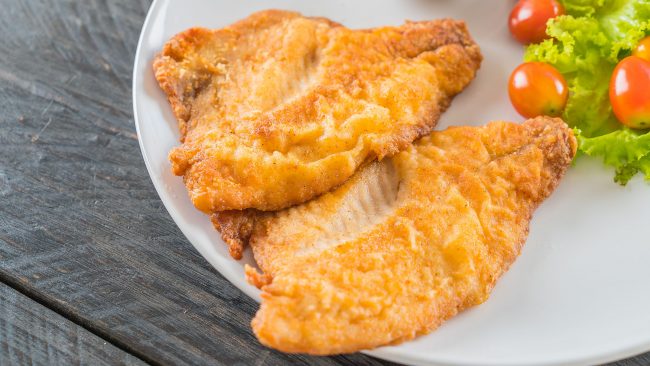 In the Amazon region of Colombia we find an exotic gastronomy that the natives of the area have been preparing for generations.

To cook the meat of this snake The loins are cut and left in cold water for 15 minutes. Then they put lemon juice, vinegar, salt and pepper, and let stand another hour.

After this, they cook for half an hour and drain and sauté with onion, garlic, tomato, coriander, potatoes and cassava. Finally, water is added and simmered for 45 minutes. It can be accompanied with rice and banana toast.

The pirarucú is the second largest freshwater fish in the world, as it can measure up to 3 meters and weigh 250 kg. In the region it is one of the most consumed fish, since the population's diet depends on the food they can get from the river. 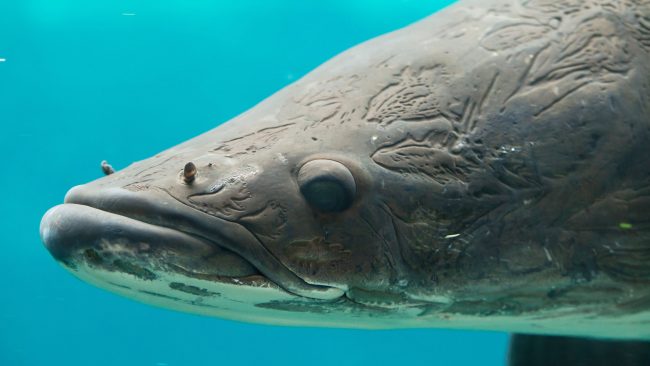 Parasca is a way of cooking dorado or pintdillo, two other species of river fish. It consists of seasoning the fish with garlic, paprika and onions, and roasting it inside banana leaves for about half an hour. It can be accompanied with fried bananas and fariña, a flour made with cassava. Here we see how it is cooked in a traditional way:

The Caribbean region is located in northern Colombia. In it we find the departments of Antioquia, Atlántico and Sucre, among others.

The arepa is a dish that is made throughout the country. However, in each area, it is prepared in a different way. Egg arepas are the most representative of Caribbean cuisine.

To make them, you have to mix flour with water and a little salt, knead and make the shape of the arepas. These are fried for three minutes, the excess fat is removed with paper towels and a groove is opened at the edge. For her, she puts an egg inside. The dough is sealed and fried until the arepa is golden brown.

The first step in cooking the chicken stew is to make a hash with chives, green tomatoes and onions. This is crushed and boiled with a whole onion and beef tail over high heat for an hour. 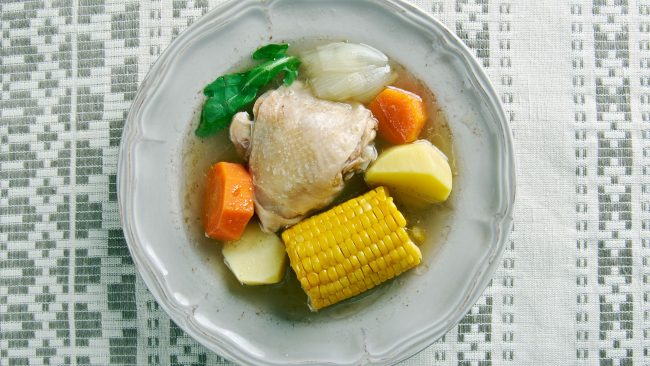 Then the chicken meat and a peeled and cut banana are added. This is cooked for half an hour. After this, the whole scallion is extracted and cassava, salt, pepper, cumin, dye and coriander cimarrón are added (although the ingredients may vary). Leave 20 more minutes cooking and be ready to serve.

These are the necessary ingredients to cook the enyucado, a sweet typical of the Caribbean region:

The yucca is peeled and grated. Then, mix it with cheese, sugar and melted butter. Coconut milk, grated coconut, crushed aniseed and kneaded. Finally, vanilla and cinnamon are added, and baked for half an hour.

This article has been shared 87 times.