The gastronomy of the Galapagos Islands can be defined as varied, although a wide range of recipes whose main ingredients come from the sea predominates. The most common way to prepare most fish recipes is ceviche style, that is, marinated with lemon. Below we show you the most important dishes of the Galapaganian gastronomy.

Seafood rice, also known as rice with seafood, is a very popular dish not only in the Galapagos Islands and Ecuador, but throughout Latin America. It is a traditional dish of the coastal areas and, for this reason, it is among the main Galapagos.

As its name suggests, the main ingredient is rice, to which shrimp, shells, squid, mussels are added … in short, all kinds of seafood and fish It also usually contains garlic, onion, pepper, a touch of coriander and various spices. 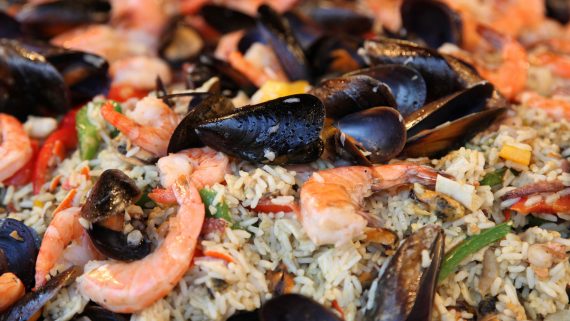 Many are those who consider this Ecuadorian dish as the first cousin of the seafood paella so typical of Spanish cuisine, mainly because its appearance and main ingredients are very similar: varied seafood and rice. Additionally, there are those who add peas and / or peas as well.

The difference between the paella and the Galapagos sea rice, however, lies in the spices and condiments that the latter carries, as well as in the type of rice. For sea rice, long grain rice is used, while the traditional paella recipe dictates that it should be made with short grain rice.

On the other hand, paella rice has that characteristic yellow-reddish color because saffron or food coloring is added, while Galapagos seafood rice is made with achiote, hence its darker color. On the other hand, sailor rice has cilantro and garlic as base condiments.

Cod with potatoes is a simple recipe, described as "humble" by many natives of the Galapagos Islands, in which once again fish (cod) is the star ingredient, as is the case in most typical dishes of the Peruvian coast

The secret for this dish to fit us as described in the traditional recipe are potatoes. Ideally, leave them for the last, once we have cooked the cod and we have added a delicious stir fried based on green and / or red pepper, scallions, garlic and tomatoes. 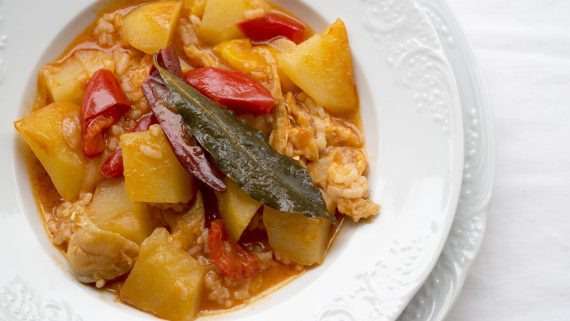 Once the previous ingredients are chopped and chopped, it is advisable to add a touch of White wine to enhance the taste of the final dish. We let it evaporate and incorporate the potatoes also chopped after a while. It doesn't matter if the pieces are regular or irregular.

In the end, the fish stock is added in a considerable amount to cover all the above ingredients and the potatoes are cooked for approximately 25 minutes. This step, as we said, is essential so that we have a good plate of cod with traditional potatoes.

Bolón de verde is one of the most important dishes of the Republic of Ecuador, especially in the Galapagos Islands. It is at the same time national dish and more traditional dish of this South American country, whose base is the green banana.

In fact, the green banana It is one of the most basic and most widely used fruits in Ecuadorian cuisine. It is usually eaten fried as an ingredient of a large number of dishes in the form of patacones, chifles or also boiled. It is prepared salted and, after frying, acquires a hard consistency.

In reality, there are several historians who believe that the true origin of the green bolon is in Cuba, where it is known as banana fufu within the Cuban gastronomy. The main ingredient of fufu is the mashed banana mixed with pork rinds. It is also typical of Peruvian cuisine, in this case called tacacho. 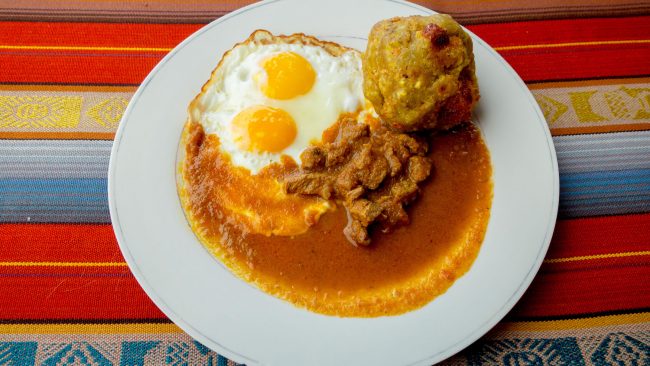 In its origins, the consumption of boiled and crushed bananas is related to slaves, a way of eating bananas that possibly comes from Sierra Leone and Ghana.

Now, the recipe for the green bolon varies slightly with respect to that of the Cuban fufu. Thus, although the base recipe is practically the same, the green bolon is mixed with cheese, an ingredient not included in the fufu recipe.

A green bolon, as the name implies, is a ball about the size of a fist made from green plantain roasted or fried previously and then mashed and kneaded firmly with the hands. A filling based on cheese, although there are those who prefer to include other ingredients such as fried meat, for example.

Once the firm dough is achieved, the green bolon can be consumed directly or, if preferred, fried or baked a few minutes before eating. In this way, it is slightly roasted and crispy on the outside. They can be served accompanied by other ingredients, such as a fried egg or corn, among others. 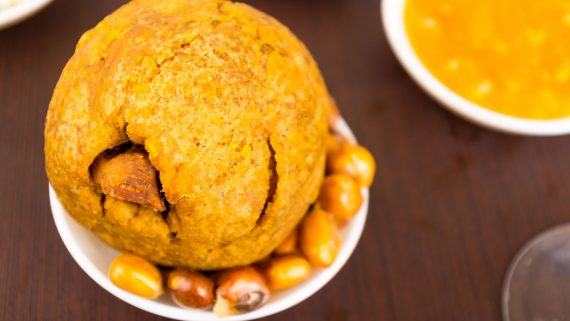 Before defining what this exquisite dish of galapagueña gastronomy consists of, it is important to clarify what we mean when we talk about «canchalagua». Canchalagua is an endemic mollusk of about 5 cm formed by a shell shaped shell and black.

Although currently canchalagua ceviche is a popular dish throughout the Galapagos, it is especially typical of the San Cristobal Island, the easternmost of the archipelago. The cebiche or ceviche of canchalagua is a coveted dish that currently can only be consumed in three of the twenty restaurants currently on the island.

The dish includes other ingredients such as rice and canguil. Its popularity is currently due to tourists who visit the island every day; In fact, it is estimated that 60% of the consumption of this dish is thanks to the tourism that the island receives. According to the Galapagueños, it is an "aphrodisiac" dish. 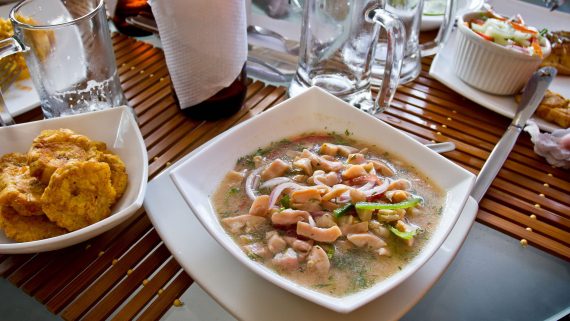 The texture of the canchalagua is hard, similar to that of the octopus, but its flavor is similar to that of clams or shells. For the preparation of this dish, tomatoes, peppers and onion are also used, as well as lemon juice To enhance its flavor. Other ingredients also frequent are bananas, potatoes, avocado and onions, among others.

As we have already mentioned above, the type of food that predominates in the Galapagos Islands is fish and shellfish. Lobsters and prawns they are probably the most consumed by the main populations of the archipelago, such as Puerto Ayora (Santa Cruz Island) and Puerto Vaquerizo Moreno (San Cristóbal Island).

Ceviche, either from canchalagua or with another mollusk or fish, is among the main recommendations, followed by onions (fish soup) and, of course, a dish of lobsters. Typical of this area is the spiny lobster, specifically the red lobster and the green lobster, the latter being larger than the red lobster. 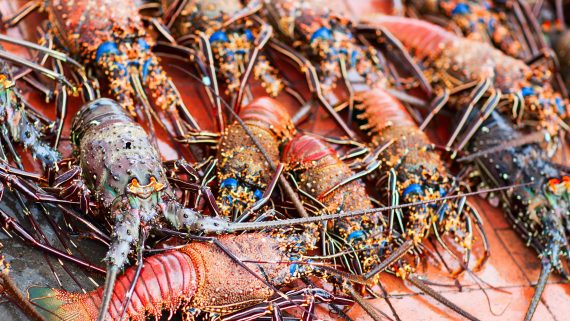 Lobsters can be consumed in several ways and there are many recipes: lobster with special sauce, lobster with caviar and pink sauce, gratin lobster, baked lobster, garlic cream lobster, rice with lobster and clams …

Although in the Galapagos gastronomy you can find some of the main dishes of Ecuadorian cuisine, such as meats, potatoes, vegetables, grains … and also foods from the international arena, the truth is that what attracts the most attention if you have occasion to Visiting Galapagos is excellence when preparing seafood usually.

Cassava bread is an appetizer from the Ecuadorian coast and one of the most representative dishes of Ecuador today. Although it may not seem like it, your recipe is very simple. It is usually consumed in the breakfast or snack, although it admits any time of day.

Cassava bread is typical throughout Ecuador and, in addition, there are versions in other Latin American countries, such as the famous country of complaint or traditional cheese buns from Brazilian cuisine. 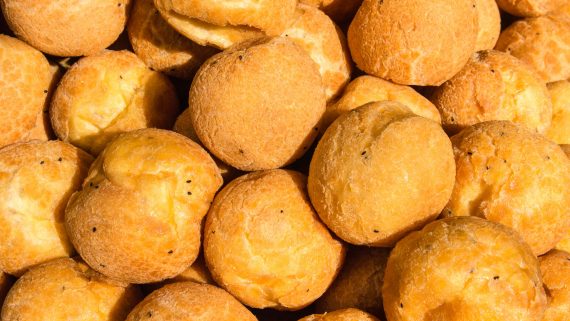 It is usual to serve it accompanied by other foods, such as yogurt smoothie with fruits, chocolate … and also as a side dish for other stronger foods. For its preparation it is used cassava starch and the way of elaboration is very creative. Grated fresh white cheese is necessary, usually half mozzarella and half Dominican leaf cheese.

To prepare it, you must start by mixing the cassava starch with the cheese. After about 5 minutes kneading, add egg and continue kneading for another five minutes until the dough acquires a smooth consistency. If it is complicated, it is advisable to add some milk so that it is not dry.

Seafood soup or seafood soup is a very typical and traditional recipe of the Galapagos Islands. As in the case of marine rice, in a seafood soup you can add all kinds of seafood, that is, fish and seafood. It is a dish that is currently consumed throughout the country. 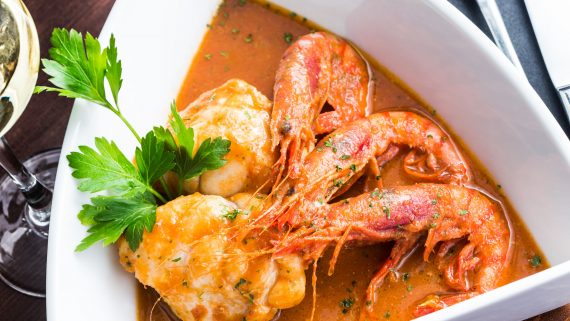 The most important thing to obtain a fully satisfactory result and faithful to the traditional recipe is to first make a stir fried with all the ingredients mentioned above (coriander, tomato, bay leaf, achiote, oil …) with an abundant amount of water. Although it depends on the amount of diners, about 3 liters of water is the recommended amount.

This article has been shared 141 times.