Although the tradition of preparing cakes with filling is supposed to be native to some European countries, it was in the 16th century when the recipe for apple pie became popular in the United States becoming one of its typical desserts. Currently, Apple Pie is an indispensable national symbol in the main American events and festivities such as Thanksgiving and Independence Day.

Traditionally, the Apple pie has two layers of dough, the first as a base and the second to cover the filling, the same that can be placed circularly as in any cake or in the form of grids (this is achieved by making thin strips with the dough ).

The Apple Pie has some variants where we can place the apple in pieces or compote; place them on the dough or on a layer of cream that we would place to cover the dough; covering apples with pieces of dough or rolling it up; and even, in its more risky versions we have been able to see it covered with whipped cream, ice cream, or accompanied with a good amount of cheddar cheese. 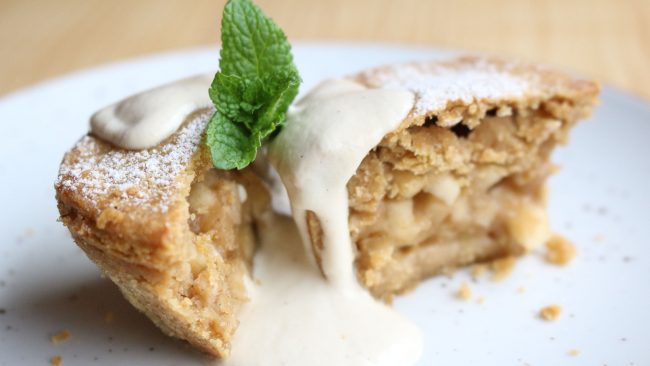 The apple pie is based on the dough, which is prepared with:

– Butter
– Water
– Wheat flour
– In some variants we will find that one or two eggs are included, depending on the amount of portions.
– For the filling we need Golden apples.

How to make Apple Pie step by step:

The dough is known as the puff pastry and once we have mixed and kneaded the ingredients, we must place the dough in the preheated oven at 180 ° C and wait for it to be cooked.

For the filling it is recommended to look for apples such as Golden or Reinetas – which are usually more acidic – since this will create a contrast of flavors with sugar. If we do not get fresh apples we can opt for packaged or apple compotes, but, only in the latter case since the taste is not the same.

For the Apple pie to have its typical aroma, we must include in the preparation a little cinnamon, cloves and nutmeg. These ingredients will flavor and subtract the sweet. In some variants, lemon juice and some rum are added in the filling preparation.

Other versions of Apple Pie

Like most typical dishes, the Apple Pie has been modified in each destination that has come adapting to the tastes of the country, so, for example, in France apples are cooked in butter before baking; In Holland it is filled with apples and raisins, in addition to adding a little lemon juice and, in Venezuela, it is a simple dessert where only the dough is filled with apple pieces and usually eaten both at breakfast and at snack.