As one would say in Catalan “University of Barcelona”, This education center was founded in 1450, this is one of the first universities and its origins date back to the time of“Martin 1 the Human”Which I try to grant to the city of Barcelona the possibility of imparting the medical degree that, in the end, the Magnanimous King approved in 1450, was then transferred to “Cervera”For 150 years as a prize for helping the king in the war of Spanish succession.

After returning to Barcelona in 1842, the government of the Spanish Republic granted Autonomy to this institution. Admission to the University of Barcelona covers 33% of University places in Catalonia.

The university has the Humanities Campus formed by the Faculty of Philology, Mathematics, Philosophy, Geography and History, then there is the Medicine Campus, the Bellvitge Campus with Medicine, Dentistry, Library and Information Technology, among the outstanding professors of this magnificent university is it so: Domenec Aguirre, famous historian, jurist and politician of the XVII, Ramón Aramon Serra, philologist and Manuel Ballester Boix, Harvard chemical professor and winner of the award-winning Prince of Asturias Award for Scientific research. 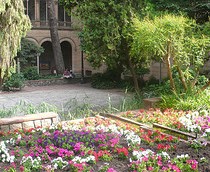