The typical dress of the German culture is characterized by its rural origin. At present, it is used in the most prominent festivals in Germany, as is the Okftoberfest. This clothing varies in each region, but in all of them it has some common features. Here you will find the characteristics of these traditional costumes.

The traditional dress of women is called Dirndl. Its history originates in rural areas. It is in the nineteenth century when the maids of the city began to take him. However, from 1870, the bourgeoisie began to use it, so it became a pledge of haute couture.

The upper part consists of a blouse and a corset. Traditionally, the blouse was dyed naturally, so soft colors were worn in spring and summer and dark colors in the cold months, as well as thicker fabrics.

To these garments are added a skirt, white socks and an apron. Originally, the skirt reaches the ankles. However, its height varies depending on the fashion of the moment. 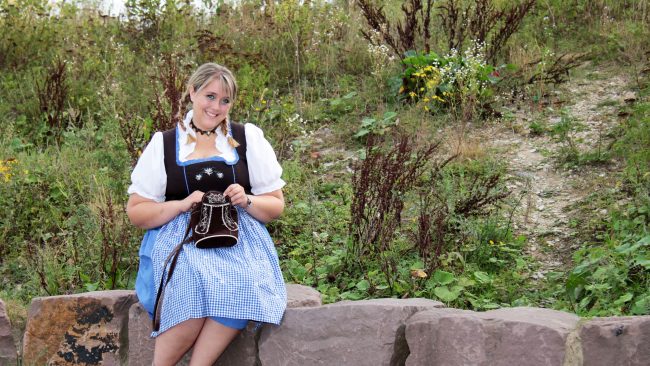 The way in which the apron is knotted is loaded with meaning. If the tie is tied to the right, it means that the woman is in a relationship. If it is on the left, it is single. If the tie is made in the front center, it symbolizes that it is a virgin, while knotted behind it reflects that it is a widow.

Typical shoes have a thick heel and are decorated with buckles. The color of these goes along with that of the Dirndl. The fabric used for the suit is cotton or linen, although currently it can also be found in polyester.

It is common for a small pocket on the front or side to be worn at the bottom, as well as for women to be adorned with a necklace, a bracelet and a purse. 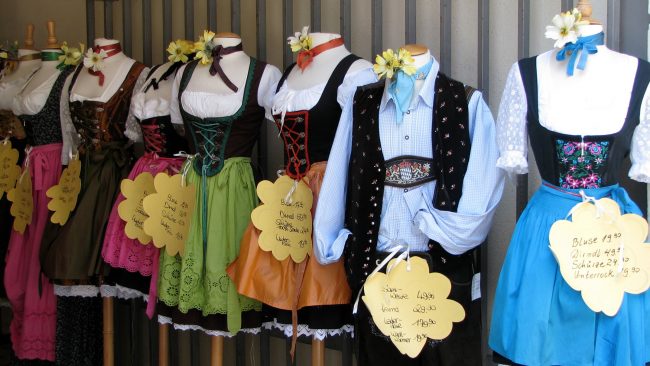 Depending on the region, the Dirndl may vary. In the case of Bavaria, the typical colors are red, brown, white, green and pink. In the Black Forest, special occasions are used Bollenhut, a big red hat.

The most important piece of clothing typical of German men is the Lederhosen, which in Spanish means «leather pants«. They have been used since the fifteenth century, when they began to take to work. 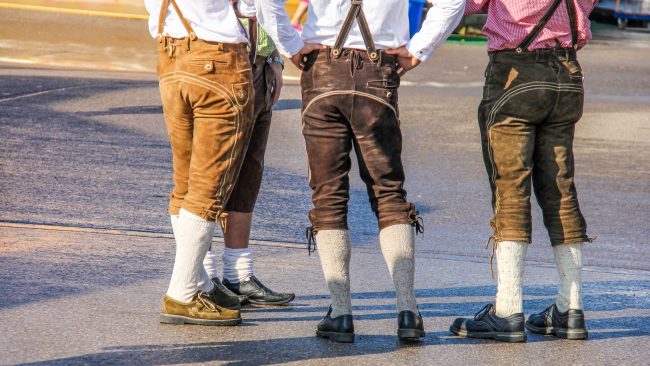 There are three types of pants: The one above the knee, used mostly by young people (Kurze Lederhose), the one that goes to the knee (Kniebundlederhose) and the one that reaches the ankle (lange lederhose).

He Lederhose usually carry a pocket on the right side. Along with these pants, men wear a plain or plaid shirt and thick wool socks that reach the calf (Strumpfhosen).

Traditional shoes are called Haferlschuhe. It is said that its inventor was the shoemaker Franz Schratt, who in 1803 created the first ones, drawing on the hooves of the goats.

Sometimes, they also carry the Tractenhut, a felt hat that has its origin in the Alps. They are usually decorated with a ribbon and a Gamsbart, a lock of hair in the form of a brush that began to wear the lower class in the sixteenth century. 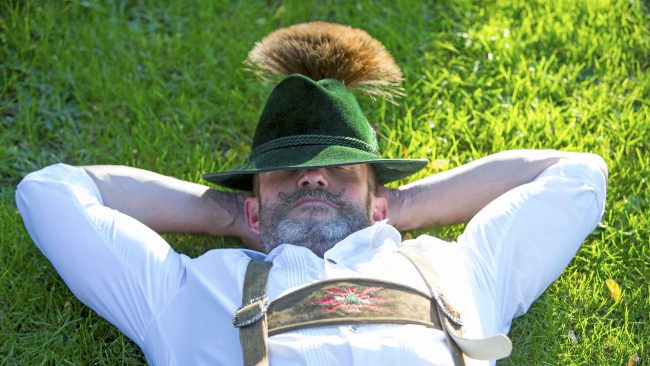 In the Bavarian region, the pants are black or brown, while the shirt is usually red, green or blue. Also, in some areas of Germany the Gamsbart is only blue on holidays.

The whole set of traditional clothing, both for men and women, is called Trachten. In the case of the man, to finish the uniform a jacket is usually added, the Trachtenjacke.

These clothes, derived from the Bavarian regional costumes, are worn on important German holidays, such as the Oktoberfest. Also, there are still people who decide to marry this dress. 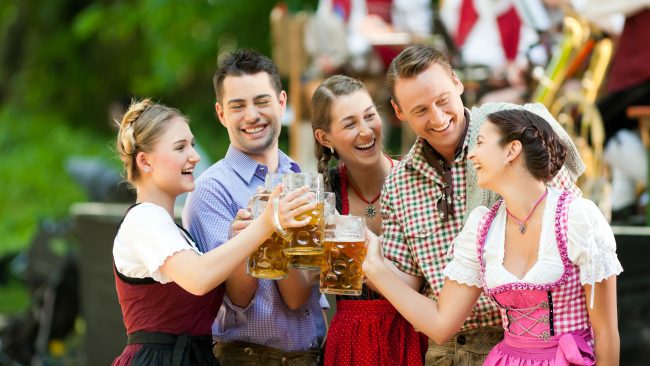 The popularity of using this clothing resurfaced in 1853, when the government of Upper Bavaria decided to revive the spirit of patriotism by retaking some traditions.

Children also wear this clothing, because for them special sizes are made. In the case of girls, they usually wear Dirndl of more cheerful and striking colors. 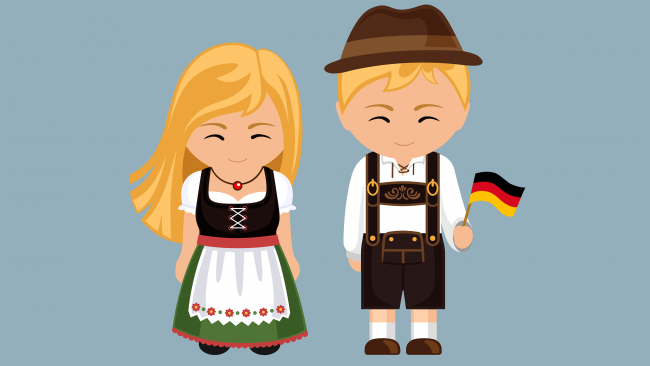 Today, these outfits can be purchased both in specialized stores and in department stores or the internet. Such is the success of these costumes that have inspired a clothing line, the Landhausmode.

The people of Germany who emigrated to the lower Volga area in Russia, from 1763. They did so following the offer of Empress Catherine II to occupy these lands. 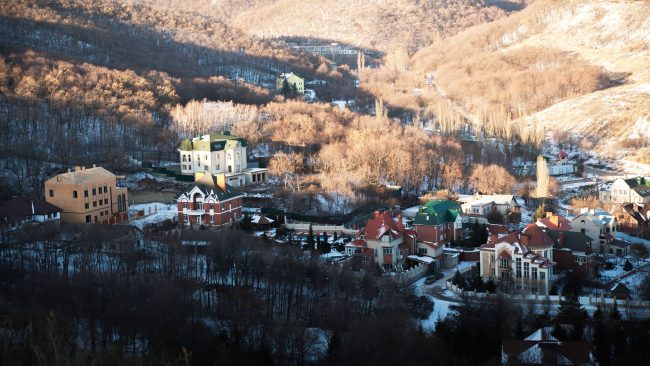 These families, after the passing of the years, developed their own way of dressing. In the case of men, the most used garments were felt boots (Filtzstifel) and fur coats (Schafpelz). The shirts were buttoned and collarless.

As for women, they were more faithful to the German tradition, but their dresses were more gray and dark. They also covered their heads with a handkerchief and did not wear a coat, but instead made clothes with thick fabrics such as wool.

In the mid-nineteenth century, some inhabitants of the Volga began to emigrate to South America, especially to Uruguay and Argentina. With the passage of time, they adapted to the clothing of the place, although the women were more conservative with their clothing.

At present, in populations of descendants of Germans of the Volga, as is the case of the Village San Antonio, in Entre Ríos, Argentina, they celebrate parties to resume the customs and typical clothes of Germany.